Eritrean Migrants Face Torture in Libya: What the International Community Can Do 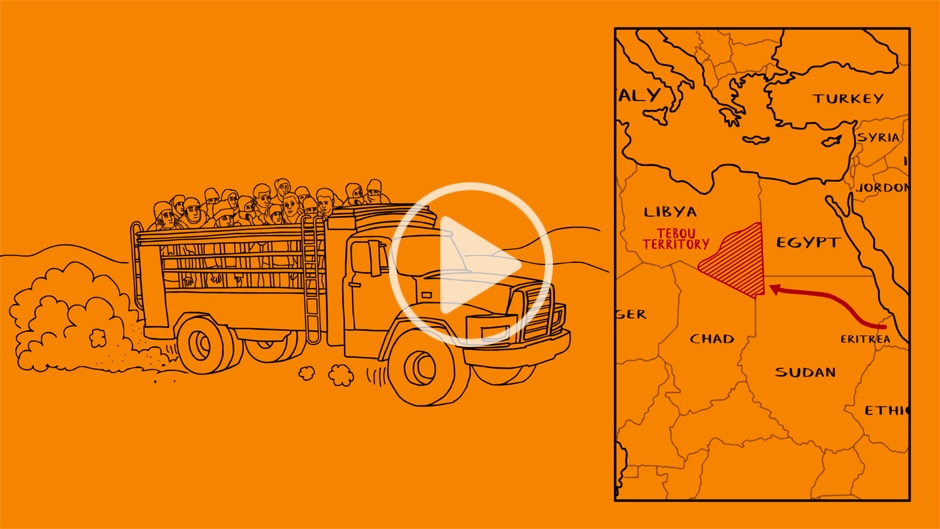 Tens of thousands of East and West African migrants face violence, abuse, torture, and loss of life as they transit through Libya to reach the Mediterranean.

Are the migrants victims of human smuggling, human trafficking or neither? In the absence of a stable government in Libya, what can European countries do to prevent the loss of life and torture of migrants in Libya?

As a crime against humanity, the international community is obligated to protect these migrants under the United Nations responsibility to protect commitment, meaning that international states should take action to collectively protect migrants in Libya.

We have been researching irregular migration, migrant smuggling, and human trafficking from Asia and Africa to Europe for several years. Our research has made us aware of the complexities of the realities on the ground for migrants. We compared those realities with international conventions and policy categories designed to help migrants.

Despite the torture and extortion that these transit migrants may face, they cannot benefit from some form of protection upon arrival in Europe. This is because they lack a clear codified status corresponding to their situation.

Smuggled, trafficked or neither?

Migrant smuggling involves a voluntary agreement between a prospective migrant and a smuggler, at least in theory. The smuggler facilitates the irregular transit and entry into a country, the migrant pays for their services. Their relationship finishes at the completion of the agreed journey.

By contrast, human trafficking involves an element of deception and coercion and also exploitation at the place of arrival not present in migrant smuggling. Again, this is in theory. Also, trafficking does not require the crossing of international borders.

According to the UN definition of human trafficking, acts can include recruitment, transportation, transfer, harbouring, or receipt of persons. These are all acts that are also involved in the smuggling of migrants.

But the purpose of these acts may not be simply about profit. They also involve exploitation such as sexual exploitation, forced labour, slavery, or the removal of organs.

These definitions and the distinction that arises from them tend to become meaningless in situations such as those along the trans-Saharan African routes where there are no clear state authorities.

Although many migrants pass through Libya, our most recent study looked specifically at the experiences of Eritrean migrants coming to Italy via Libya. Our research does not represent all migrants in Libya.

Eritrean migrants enter Libya in the southeast; this is Tebou territory. Since the fall of Muammar el-Qaddafi and the end of his 42-year brutal regime in 2011, Libya has been ruled by tribal regimes and the Tebou have strong control over their territory.

Migration controls are enforced by para-state actors such as the different tribes and their semi-formal accords with the UN-recognised government of Libya as well as other tribes and actors in the country.

Eritreans leaving Sudan for Libya know and expect that they will be kidnapped and extorted in Libya. There is no deception involved. They are brought to the Libyan-Sudanese border by smugglers from Khartoum and are told to wait.

When the Libyans arrive, they are taken to compounds where they call their families and connections to transfer money for their release. They are not allowed to leave until their family pays. Many are abused while they wait for the payment.

Once the payment is made, most often, the Eritrean migrants are brought North and pushed toward the Mediterranean sea. When they arrive in Italy, the ordeal is over and they no longer have a relationship with their captors in Libya.

We argue that this is not migrant smuggling as there is no initial agreement made between two parties. This is also not human trafficking — there is no deception nor coercion and the relationship ends after leaving Libya. This is kidnapping and extortion, and can best be addressed as a crime against humanity.

What can the international community do?

What are the moral and international law obligations for countries of arrival when migrants or asylum seekers have been victims of a crime against humanity?

Can we break free from the migrant smuggling and human trafficking definitions and adopt an international protection regime for these migrants or asylum seekers when they arrive in European Union territory?

Today, Libya witnesses the emergence of a tribal regime that has replaced the state and has its own informal rules. Libya’s history is based on tribal authorities that were united for its independence in 1951 and were carefully managed and appeased under Muammar el-Qaddafi. Post-Qaddafi, we note the return of the tribe as an important political actor.

Paradoxically, out of fear of uncontrolled migration, actors like the International Organization for Migration and the European Union provide operational support in Libya and Niger, hoping to re-establish the basic rule of law conditions and control the borders.

This effectively, however, contributes to the reinforcement of the tribal regime by indirectly legitimising tribal authorities.

As the EU seeks a durable solution to the Mediterranean migration flows, countries of arrival could adopt an international protection regime for these migrants or asylum seekers when they arrive in European Union territory and protect people who have been victims of crimes against humanity.

Regionalism, Human Rights, and Migration in Relation to Climate Change