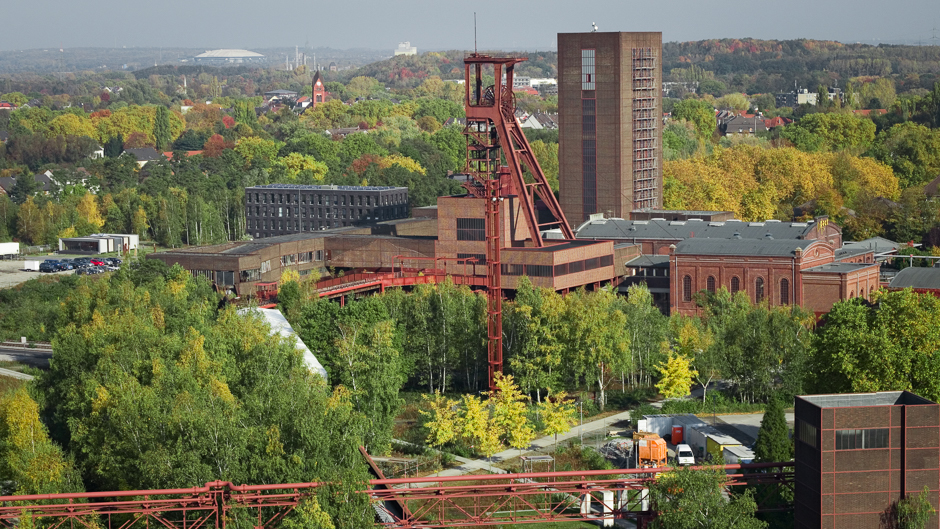 Walking the busy paths crossing the lush lawns of Krupp Park, it can be hard to believe this green lung of Essen once was an industrial wasteland.

But in just a decade, Essen has turned the site of an idle Krupp steel factory into a popular nature park. There are playgrounds, a wooded area, and a lake fed with rainwater from the roof of ThyssenKrupp’s corporate headquarters next door.

Krupp Park is just one symbol of Essen’s transformation from a city of coal and steel into a model of environmental consciousness. And it’s one reason why the European Commission declared Essen as Europe’s “Green Capital” for 2017. This is the first time the award has gone to a city with a mining and industrial past, offering a role model for urban areas struggling with the effects of deindustrialisation.

But Essen is a city to watch for other reasons as well. The city is making a big push around sustainable mobility, hoping to make big gains for bicycling and transit. Bottom-up initiatives led by citizens are forging new connections between environmental issues and the fight against poverty. And this city of 574,000 is working cooperatively with its neighbouring municipalities, ensuring that the wider region known as the Ruhr Area moves forward as one in its economic and environmental transformation.

Essen “has shown that we can transport forward-looking themes, events and developments within and for the region,” says Mayor Thomas Kufen. “Essen is again ‘on the map’ for many visitors from Germany but also from abroad. We were able to show what a great potential our region has.”

‘From grey to green’

For a city long dominated by coal mining and heavy industry, Essen has long been a testing ground for innovations in sustainable development. In the early 20th century, when most factory towns were cramped and dirty, the urban planner Robert Schmidt laid out Moltkeviertel, a “garden city” near Essen’s centre. The area boasted wide roads, plentiful parks and recreation facilities. They were green bones for a strong community that remains a popular residential area today.

Over time, Essen’s coal and steel industries declined as lower-cost competition picked up overseas. Essen closed its last coal mine in 1986. The city began transitioning its economy toward services, trade and higher education. At the same time, it took steps to preserve its industrial past while springing forward from it.

The most famous example is the Zollverein coal mine and coking plant. The gritty buildings here were converted into a campus of museums focusing on the region’s industrial heritage, art, history and design. The museums plus restaurants, performance spaces and craft workshops bring in 1.5 million visitors per year. The UNESCO World Heritage Site is a key part of the city’s strategy to rebrand Essen as a cultural destination.

“From grey to green” is the mantra city and regional leaders followed in their long-term planning. The cleanup of the Emscher River is a good example. Launched in 1990, the 30-year revitalisation programme is transforming a waterway that was the Ruhr Area’s industrial artery as well as its cesspool. 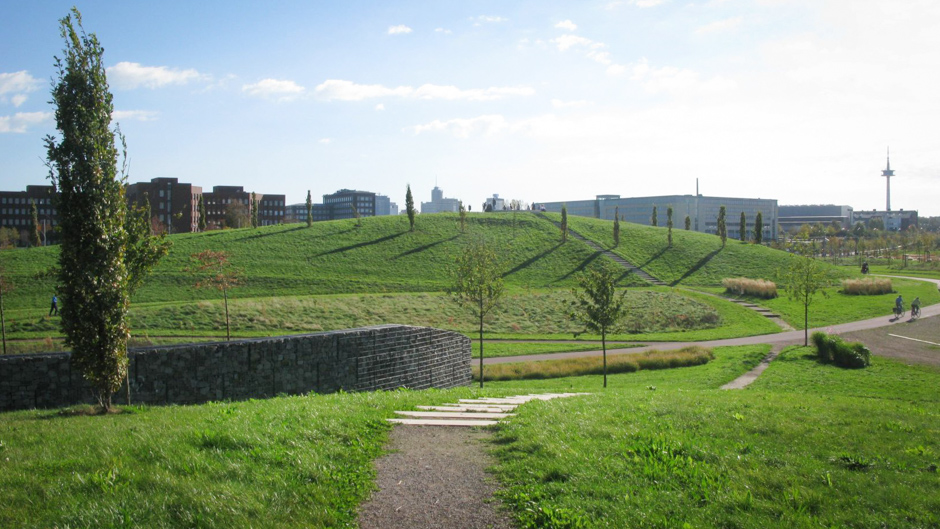 Engineering is part of the solution. More than 50 km of underground sewers are being constructed to send wastewater to treatment plants rather than directly into the river. The €4.5 billion project was launched by the state government of North Rhine-Westphalia, funded largely by the European Union, and is being managed by a public board called the Emschergenossenschaft. The project is expected to be finished in 2020.

“The reconstruction of the River Emscher is one of the most symbolic projects to be undertaken,” says Simone Raskob, Essen’s deputy mayor for environment and buildings. “The river reflects the region’s history in a special way.”

There are smaller interventions along and away from the river as well. Since 1983, Essen landowners have been able to reduce fees they pay for wastewater drainage by changing paved surfaces that produce runoff to permeable surfaces that allow rains to soak into the ground. And since 2007, an ambitious programme called “New Ways to Water” has added new green spaces to absorb water, as well as lakes to hold it.

As a result of all these efforts, the Emscher and other creeks and lakes connected to it are coming back to life. In 2015, the first brook trout was seen swimming in the river. Starting next summer, bathing will be permitted in nearby Baldeney Lake, which is clearly benefitting from improvements all along the local water system.

The New Ways to Water programme also has a strong mobility component. It’s created a vast network of bike lanes traversing the region, both north-south and east-west. Another project, the Ruhr fast cycleway, or Radschnellweg, is a regional bicycle highway extending 100 kms. It’s due for completion in 2020.

The first 5 kms of this highway, built on abandoned rails, are the backbone of a sustainable transportation system that passes through Essen’s city centre. This system aims at revolutionizing the commuting habits of Essen residents, as well as residents of the other 10 cities located along the route.

In tandem with the new trails, Essen and the other Ruhr Area municipalities built out Germany’s largest bikeshare system, the metropolradruhr. The overall system includes 3,000 bicycles in 10 cities, including 52 rental stations in Essen. 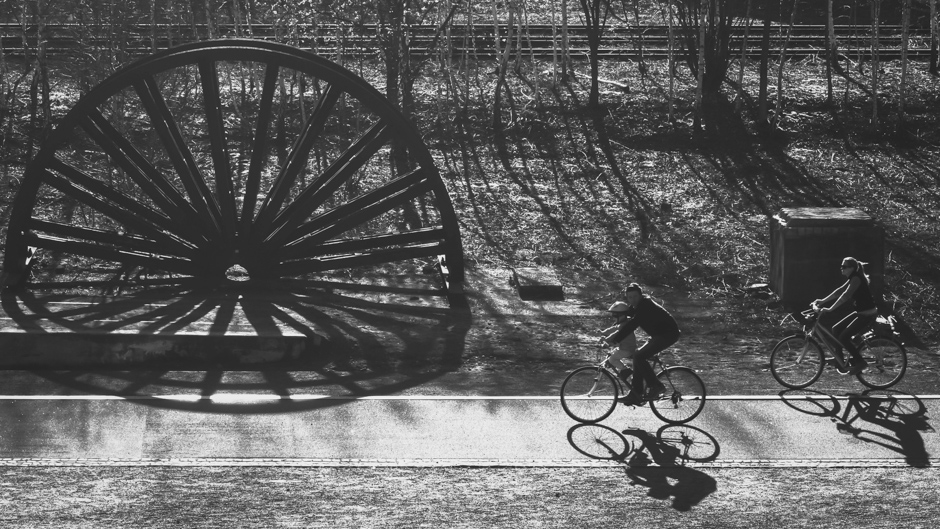 Currently, only 6 percent of journeys in Essen are made by bike. The city’s goal is to raise this to 11 percent by 2020 and 25 percent by 2035. Raskob recognises these are challenging targets. But he thinks the city is putting in place the infrastructure necessary to win over commuters. People need to see bicycling to work as a daily activity rather than something they just do on weekends. “We need an emotional process in the field of mobility if we want to reach these objectives,” Raskob says.

Raskob hopes ongoing improvements to the city’s public transport system will help convince more drivers to give up their cars. The city is introducing a night-time bus network, speeding up trams by giving them priority at traffic lights and refurbishing bus and train stations. Access for the elderly and disabled is also a priority. New buses have low floors for easy boarding. Bus and tram stops are being redesigned to remove barriers to mobility. And bus training courses are available for seniors and children.

Not all of Essen’s green accomplishments have come through major public investments. Some have come directly from the residents.

A good example came after a destructive storm hit in June 2014. The storm knocked down 20,000 trees, or roughly 15 percent of the city’s urban forest. In the days afterward, a group of residents who did not previously know each other launched a Facebook group called Essen Pakt An. It was a place to share information on where volunteers were needed to clear debris or lend neighbours a hand.

The group kept going long after the emergency. Members mobilised to rehabilitate 400 playgrounds damaged by the storm, and to replant trees in the hardest-hit parts of the city. They’ve also begun outreach with the city’s homeless. Volunteers deliver them food twice a week, and are exploring an idea to train homeless people to work as park rangers for a few hours a day in exchange for free shelter.

“Green should be a long-term thinking of the people,” says Markus Pajonk, lead coordinator of Essen Packt An. “What we did on social media shows that we live close to each other and we have to work together for the urban environment.”

Environmental activism is also rising in suburban communities like Altenessen, home to many residents originally from Lebanon and Turkey. When volunteers turned out for an annual city-wide drive to clean up trash in parks and public spaces last year, the largest number of volunteers came out in Altenessen.

City officials have noticed. They’re focusing efforts to create new parks and community gardens in neighbourhoods like this one. They think having more green space will be an important part of welcoming migrants and other newcomers to Essen into the community. “Having good green infrastructure is good for integration,” says Raskob.  “Green spaces give people a place to meet.”

Simone d’Antonio is a Rome-based journalist who covers innovation, sustainability and urban issues. His articles have appeared in The Good Life, the Italian edition of Wired, Il Sole 24 Ore and Il Manifesto. Simone works at Cittalia-Anci Ricerche Foundation. He also is in charge of the communication of many EU co-funded projects and programmes, and serves as the National Dissemination Point for Italy for the URBACT blog focused on European cities.