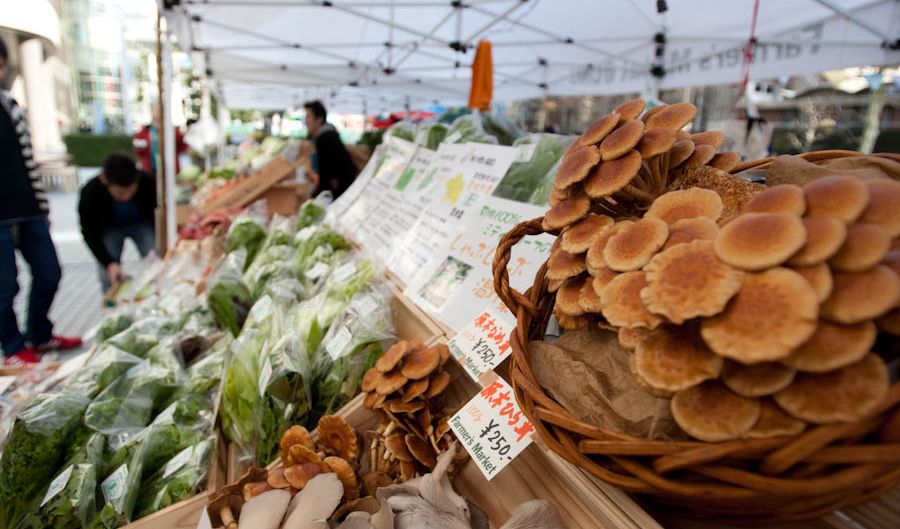 Farmers markets are popping up in the unlikeliest of places these days.

In the heart of Tokyo’s Aoyama/Omotesando high-end fashion district, the Farmers Market at the United Nations University has grown into a regular weekend fixture. Over 40 stallholders sell fresh fruit, vegetables, plants and flowers, as well as rice and a variety of other foodstuffs, most of it grown by farmers based in the Kanto plain area. The market’s motto is “Water, sun and the earth”, bringing together the themes of culture and cultivating.

The market at UNU is not the only urban spot to find farm-fresh food in Japan — currently, there are farmer’s markets in Fukuoka, Osaka, Nagoya, Yokohama, Tokyo, Niigata and many other locations. Similar to the shift towards local food in  North America and elsewhere, Japan is home to a nationwide movement — united under the Marche Japon banner — that is seeking to create places where “people who make food” can meet with “people who eat the food.”

The trend is getting a boost from the government through an initiative called Food Action Nippon that has the ultimate goal of raising Japan’s food self-sufficiency ratio (calorie based) from the current 41% to 45% by 2015.

The dynamic campaign features some celebrity star-power and includes not just educational events, but also a YouTube Channel and television programmes. Consumers are encouraged to take these five actions: 1) Eat seasonal agricultural products; 2) Eat local products; 3) Eat rice; 4) Reduce leftovers; and, 5) Inform themselves and use their knowledge to support national self-sufficiency and local producers.

Welcome to the Farmers Market at UNU

While not an official partner with the Food Action Nippon programme, the UNU is offering direct support as host of the Farmers Market at UNU. The market is the brain-child of Roswitha Lasser and Terao Kurosaki, cultural advisors to the UNU, who worked together with leading organic farmers to provide a space for the public to purchase directly from farmers.

Lasser has an unapologetic passion for sustainable food and a commitment to spreading the word both on the street and through the web.

She believes that our current lifestyle and food system is “simply unsustainable” and argues:  “Eating directly from the farm is not something special — it’s the sort of lifestyle we should be leading, like human beings have done for thousands of years.”

Our relationship with food

One thing that concerns Lasser immensely is how our relationship to food has changed in recent years.

“We started to praise consumer society and people started to earn money to spend it and not to save it,” she says.

“This has destroyed the way people behave, especially in relation to food. Things have to change. People need to know that fast food is the most expensive food that money can buy. It may seem cheap now but you will pay a much higher cost later through your health, and society pays a much higher cost through environmental degradation.”

While the Farmers Market at UNU is not 100% organic, Lasser thinks it’s a step in the right direction: educating people about what they eat. That seems right and fitting for a university campus.

“If you do not address normal people and spread the message to them, you will always be preaching to the small minority who already cares about this issue, maybe 1% of the population.

“It is important that we understand where our food has come from and who has made it for us. I want people to experience buying food from a real farmer who loves his or her profession,” Lasser explains. Something that was not formerly easy to do in the heart of Tokyo.

“I also want the internet to be used more in making young people aware about the importance of food and of knowing where your food is from.”

Plans for the future

According to both Lasser and Kurosaki, the future looks decidedly bright for the popular Farmers Market at UNU.

“Firstly we would like to expand into weekdays,” Kurosaki says. “Secondly, this is a place where we want to develop a learning atmosphere. We want to expand more into design and cultural activities. Everything we do is connected to food and vice versa.”

As the new year begins, it is a good time for people to rethink their food and shopping habits. Lasser has a simple message for them:

“I explain to the shoppers here that what they think is a normal apple is not a normal apple at all. Today we are using all the pesticides and chemical fertilisers to make the apple look perfect.

“In reality, a normal apple is an imperfect spotted apple that has come directly from nature and directly from a farmer. So I encourage them to buy a spotted apple and be connected to nature. So my message to shoppers is: don’t be a marketing victim.”

The most financially successful markets are located in urban areas. The longer a market is open during the year, the better they do in terms of the number of vendors, sales and customers. For instance, the average number of vendors for a year round market in the US is 58, with monthly sales of nearly US $70,000 and around 3580 customers per week.

In part this resurgence, at least in the US, has been inspired by localisation advocates like Lester Brown and writers like Michael Pollan. Pollan’s groundbreaking books, such as The Omnivore’s Dilemma: The Secrets Behind What You Eat and In Defense of Food: An Eater’s Manifesto, have awakened concerns in millions of people about the inadequacies and dangers of our current global industrial food system.

“Real food — the kind of food your great-grandmother would recognize as food — is being undermined by science on one side and the food industry on the other, both of whom want us focus on nutrients, good and bad, rather than actual plants, animals and fungi,” Pollan argues.

Pollan’s just-released latest book, entitled Food Rules: An Eater’s Manual, is designed to help us make wise choices about the food we eat. He is a big supporter of farmers’ markets.

“In great and growing numbers, people are voting with their forks for a different sort of food system,” Pollan says. ”But as powerful as the food consumer is — it was that consumer, after all, who built a $15 billion organic-food industry and more than doubled the number of farmers markets in the last few years — voting with our forks can advance reform only so far.

“It can’t, for example, change the fact that the system is rigged to make the most unhealthy calories in the marketplace the only ones the poor can afford. To change that, people will have to vote with their votes as well — which is to say, they will have to wade into the muddy political waters of agricultural policy.

So why not go out this weekend and vote with our forks at local farmers’ markets and then start thinking about how to address the challenges laid before us by Roswitha Lasser, Teruo Kurosaki and Michael Pollan.

The Farmers Market at UNU is held outside the United Nations University Headquarters in Tokyo. They are open from 10 a.m.–4 p.m. most Saturdays, Sundays and public holidays.

To have a preview of what you can find there, visit this article’s photo essay by clicking the small black camera Gallery icon at the top right of the story.

Farmers Market Comes To The UNU by Sean Wood is licensed under a Creative Commons Attribution-NonCommercial-ShareAlike 3.0 Unported License.