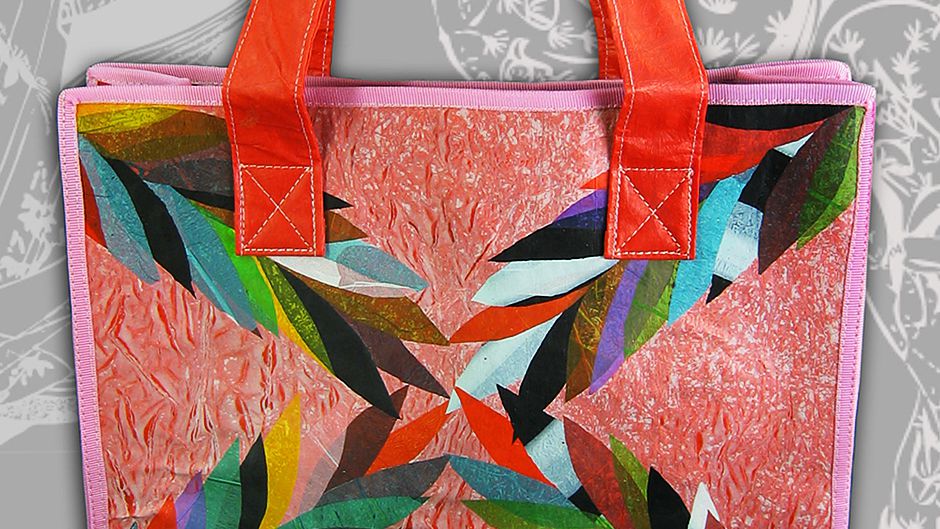 It may not be obvious, but the 3Rs of the ‘Waste Hierarchy‘ are in a particular order for a reason. ‘Reduce’ comes first, since it has zero impact. Following closely, ‘Re-use’ cuts waste and engenders no or little energy use. ‘Recycle’ comes next because it requires more energy (yet still less than to manufacture using new resources).

So, if you’re not ready to reduce away your desire to be stylish, what could be greener than fashion accessories made from garbage? Bombastic Plastix™ products are constructed from re-utilised plastic. The small Bali-based company designs and sews handbags, tote bags and wallets from fabric they create by fusing together reclaimed low density polyethylene shopping bags.

“…. Recycling means the plastic must re-enter the industrial stream to be sorted, ground up, re-processed, re-melted, re-dyed, and re-manufactured into new products,” write co-owners Sam Miller and Niluh Indrawati on Bombastic’s website. “Which we very much support by the way, cheers to the folks who do all that. We just skip a few of the ‘re-’s.” 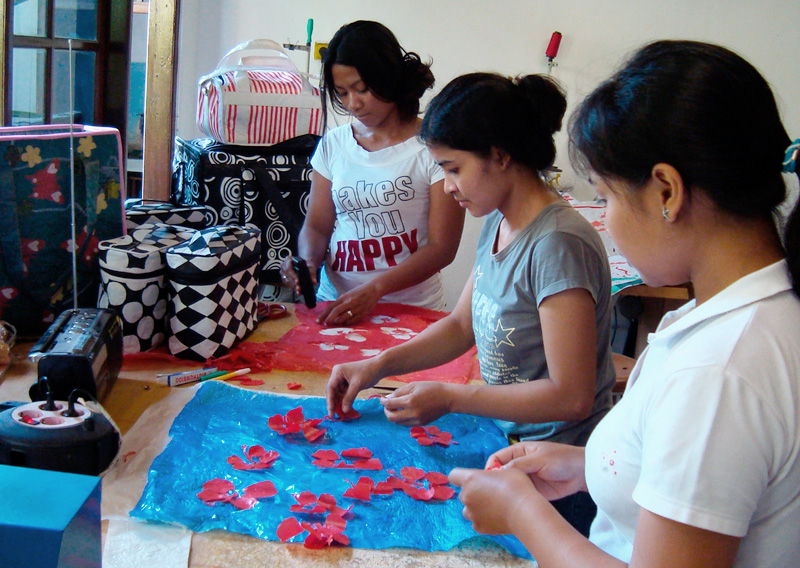 Nonetheless, Miller told Our World 2.0 in a recent Skype interview that they don’t claim to be a green with a capital “g” company. They do however, believe that Bombastic “has a responsibility, like any company,” to be as sustainable as possible. So, why not centre a business on something that helps make a dent in an environmental problem that preoccupies them?

“The plastic in Bali is everywhere, in every water source, the rivers, the oceans, the coral reefs. And we think it’s an issue that should have been solved 10 years ago.”

Bags blowing in his mind

You can read Miller’s long version of how he came up with this seemingly wild idea on Bombastic’s tongue-in-cheek blog, Plastic Planet.  Essentially, he was inspired by a fence strung with plastic bags by the strong winds in the Bolivian Altiplano (high plains).

“There must be something you can do with those things,” he thought.

That image stuck in his head for years, until he saw a video on the do-it-yourself website Make showing how to iron together shopping bags to create craft material. Something clicked in Miller’s mind and he spent the night experimenting with some plastic bags he found in a kitchen cabinet in his home near Denpasar, Bali.

Fifty-three-year-old Miller, who grew up in Florida and later lived around California, first went to Bali for the surfing. The serial entrepreneur had begun doing business in this idyllic part of Indonesia several years ago when he developed a specialised backpack for surfers.

At first his Balinese partner, accountant Indrawati, was doubtful of the scheme to re-use shopping bags. At the time, the two were working together on another project, making high-end bags from Japanese obi.

Miller persisted in his experiments to perfect the plastic-fusing process to Indrawati’s exacting standards. After being amused by his “flailing about” Indrawati finally got fully into the project and in July 2008, they made their first sale.

Since then their client list has been growing slowly and their product line expanding, and the related growth-process adventures are well-chronicled on their blog.

Bombastic uses about a tonne of plastic a month, Miller says. This comes to them from a network of rubbish collectors who are persuaded by prime prices to pick up shopping bags, which they wouldn’t normally bother collecting since market prices are low.  Bombastic pays five times the going rate, approximately US¢60 per kilogram.

Through trial and error, the pair instituted strict quality control (relatively clean, untorn plastic is needed) and now have things nailed down after lining up a top-notch team.

The small team, comprised of the partners and a handful of employees, then check and sort the bags at the Bombastic workshop and send off acceptable ones to a commercial laundry where they are washed in large washing machines, just like clothing.

Once the plastic is clean, the team tackles the fusing process, creating the patterned plastic “fabric” and the stiffer internal structure plastic, which will then go off to outside tailors for sewing and assembly. (They have a few sewing machines in their workshop, with which they make prototypes, but only one in-house tailor.)

Some adhesive and other materials, like zippers, etc., are used to create high-quality bags, though Bombastic chooses those parts carefully, buying second-hand when possible.

“We still use a little bit of new material but our goal is 80% reused/recycled and we always overshoot that,” Miller says, estimating that Bombastic products contain on average only 5-10% new material. And in particular, their Standard Billfold uses only a “minute bit”.

Although products are designed by both Miller and Indrawati, Miller says Indrawati is a very creative person, crediting her with “90% of what you see”.

Bombastic Plastix™ prides itself on the patterning of their fabric. The low-tech nature of their process means short production runs, allowing “greater creative freedom to make really hip designs”, as they proudly declare on their website.

Patterns are designed and then cut out both by hand and by computer. Each element of a design comes from different coloured shopping bags, which are then fused together. Miller credits the Balinese influence for the beauty of their creations:

“The celebration of beautiful patterns is in the soul of the folks here in Bali. If you are ever lucky enough to see a Balinese ceremony being prepared, you would see how lucky we are to be in this place. Every offering is adorned with flowers, coloured rice and a hand cut palm leaf design. All of the girls who piece our fabric bring with them that extraordinary talent.”

Though for the moment Miller says Bombastic wants to keep their exact process “close the vest”, he hopes to someday “open source” it.

“Money is important but there are a lot of other things that are important too,” he says.

For the moment, this recipe-secrecy is due to fears that profit-driven, less quality-conscious folk might use it to turn “trash into more trash.” Plus, they are a for-profit young company struggling for space in the competitive fashion market.

“We’re serious: we want to clean up plastic,” Miller told us. “But everybody needs to make a paycheque.”

Ultimately, they have several other important applications for the fabric in mind, such as landfill liners, which prevent contamination of the water table and which many poorer countries can’t afford to use, he says.

“We could actually solve that problem with material made right from the waste stream!” he says.

If you are inspired by Bombastic to mine the waste stream and try some do-it-yourself ways to transform shopping bags, you can poke through their website for the details and hints Miller gives. You can also visit the resources listed here for less Bombastically fashion-perfect results you can strive for at home.

Fashion From Trash by Carol Smith is licensed under a Creative Commons Attribution-NonCommercial-ShareAlike 3.0 Unported License.

The Story of Solutions: Better, Not More