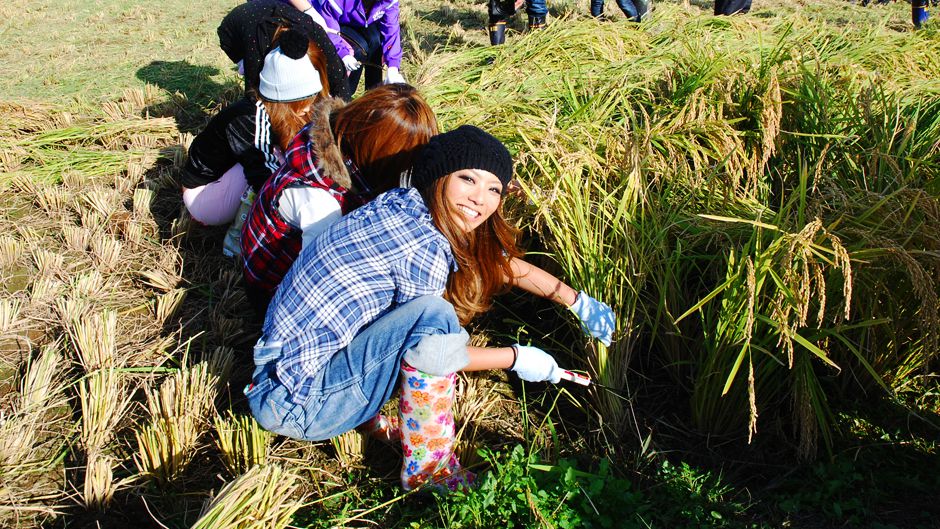 In rice fields almost 700 kilometres away from the Japanese capital Tokyo, you can find 20-something city girls working hard in a swirl of dust.

You can’t miss them because their fashion inevitably stands out in a paddy — colourful clothes and high heeled boots, over-dyed blonde hair, lush eye lashes and long polished nails. Reflexively, you may cast a hasty second glance, because they are so unexpected.

Are they really farmers, you may ask? The answer is YES.

In addition to working as a model and a singer, Shiho Fujita is the leader of a squad of young women farmers. She started a marketing business at just 19 years of age, targeting the city’s young girls. Fujita felt the need to try and transform the negative image saddling she and other “gyaru” (which is the Japanese transliteration of “gals”, the slang term for a fashion subculture containing vast subcategories).

Eventually this young entrepreneur came to join various campaigns about environmental and food problems, which led her to venture into a new field — farming.

“Young people, including me in the past, don’t have a clear picture about agriculture in general and the food problems we face,” she says.

“That’s what I want to change.” 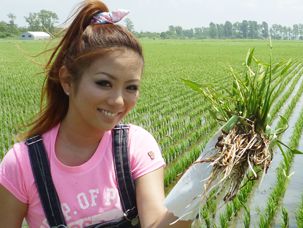 Are they really farmers, you may ask? The answer is YES.

To begin with, last year she ploughed 24 hectares of rice fields with reduced amounts of agrochemicals, after which she sold the rice online. Then one day in October, she marched down to Shibuya, one of the most crowded districts in Tokyo, and handed out 1,000 bottles of rice to young people, many of whom like to use a popular dieting method that involves not eating carbohydrates.

Recently she organised a one-day farming trip for young mothers and their children, published a book on ‘gal farming’, and designed denim overalls that are both party perfect and comfortable enough to work in.

In Japan, farming has begun attracting young people, particularly those who were born in the late 1970s and the 80s, like Fujita. Atsushi Miura, a marketing analyst, writes that the children of baby boomers (generation Y) who settled down in suburban areas do not see farming as obsolete but rather as a rustic, cool and creative activity.

But behind the popular scene lies a tragedy: in 2008, 46.8% of Japan’s 2.7 million farmers are over 70 years old. Data from the Organization for Economic Cooperation and Development indicates that 45% of their income from farming relies on subsidies, a reality that leads more farmers to take on remunerative side jobs, particularly if they do not receive a pension. Abandoned farmland across Japan has tripled in the last 20 years as a result.

The Ministry of Agriculture has been involved in encouraging young newbie growers with a campaign that includes a web presence, ‘how-to-start’ sessions and consultation meetings. Six-month e-learning courses also provide firsthand training for city business people who are too busy at work. In addition, last year alone, there were roughly 1,850 applications put in for 1,000 traineeships available under government supported programs.

While the government’s promotion may have contributed to an increase of new farmers, rising unemployment due to the financial crisis may be another possible instigation for this growing movement.

Never before has Japanese society been so anxious about the future of farmers, and the government too is worried. So this growing show of passion for farming should be a good sign.

But as the trend mounts, so too does scepticism about how much happy-go-lucky youth like Fujita are actually thinking about the country’s food problems ahead. It may be legitimate to ask if they are truly committed to the cause for the right reasons.

Working once a week in the field, Fujita knows the pains of weeding and harvesting in sweltering summer and in the shiver-inducing winter. Yet this cannot give an understanding as deep as that of the farmers tied to their work through long hours on a daily basis.

Although she is interested in living in the countryside in the future to engage in farming with other ‘gal’ buddies, for now Fujita has no plans to live full-time on a farm in a sparsely populated area. She says she is glued to the city for the time being so she can draw more attention from young city dwellers. The easiest recruitment is to send out messages from within, she told us.

Looking for something new

People in Ogata village in Akita prefecture, where Fujita grows rice, must find her project interesting because the village has long sought something more innovative and creative to lead the country’s agribusinesses.

Ogata has also been the site of another riveting agricultural saga. Established during large-scale reclamation work designed to expand the country’s granary in the 1960s, the town has since the 70s felt the effects of the government’s divisive agricultural policies, including rules that limit the development of new rice fields in order to support domestic prices. The village is therefore well known for its strong resistance against conventional policy and struggle for more control over its own rice.

Recently, faced with declines in rice price and consumption, some farmers in Ogata started growing a specific type of rice which they grind themselves and sell as rice flour. Maybe it is a coincidence but Fujita, similarly creative, has an idea to produce bread, pasta and even cosmetics from rice flour.

In any case, many believe a sweeping reform is necessary to thoroughly re-vitalize agricultural industry in Japan. The country’s self-sufficiency rate for rice, nearly 100 per cent, exceptionally higher than other grain crops, symbolises Japan’s unbalanced agricultural policy. Excessive provision of subsidies to rice farmers has weakened their competency in a global era.

“I’m aware of the criticisms,” Fujita writes on her blog, “but I’m just standing at the starting line. I believe that Japan’s agri-scene won’t change unless young people are motivated.”

Her simple and lucid words seem to hit the nail on the head.

Wherever this serious discussion goes, whatever the rebukes she has, this 24-year-old’s everlasting energy goes on. Fujita’s 2010 plan includes starting creative gardening, in which both flowers and vegetables are planted together, in addition to continuing to grow rice.

So, what about the ultimate goal?

“Today’s market for us gal farmers is limited, but someday I want to expand the market overseas.”

Her never-ending list of ideas will grow until the day ‘gal farming’ gains worldwide fame.

Ayako Iizumi is a project assistant at the United Nations University Institute for Sustainability and Peace (UNU-ISP). Her interests include a range of issues relating to democracy and sustainable development. However, what she finds most fascinating is when these different interests intersect. She holds a masters degree in International Relations from Warwick University in the UK.