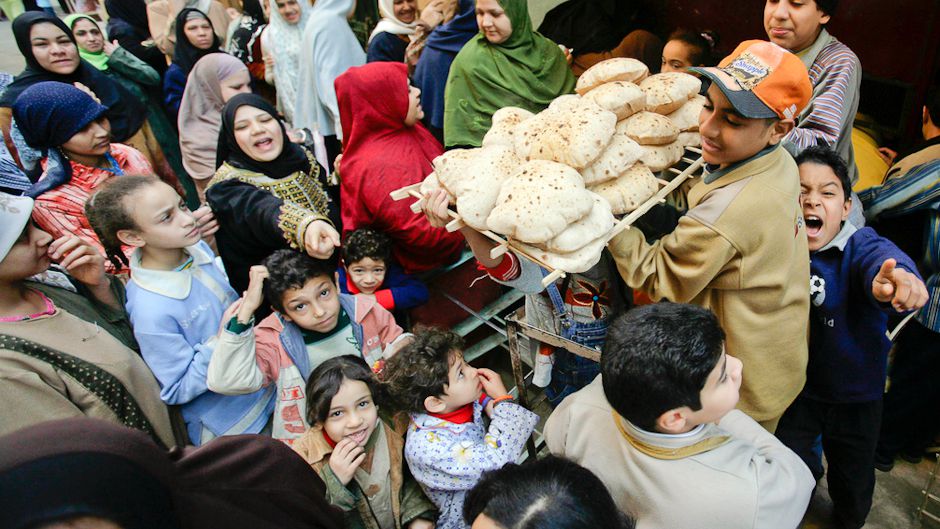 Today, more than 900 million people are struggling with chronic hunger and are mired in poverty. When looking to the future, the matter becomes even more pressing. By 2050, more than nine billion people will inhabit this planet. To nourish a hungry and crowded world, food production will need to increase by 70%.

Feeding the world’s hungry and poorest people is the challenge of our time, but with enough creativity and hard work, it is a challenge that we can meet. The solution lies with the people who farm the world’s 500 million small farms. These farms are the backbone of agricultural development and the key to feeding the future. Tapping the potential of these smallholders, many of whom live in poverty, will require a fundamental shift in the way we approach agricultural development, both globally and locally.

Earlier this year, the International Fund for Agricultural Development (IFAD) released the Rural Poverty Report 2011, a comprehensive assessment of the challenges and solutions to eradicating poverty in the developing world. The report reflects the current environment for smallholders — ripe with possibilities but entwined with emerging threats. The stories of those smallholders who have successfully availed themselves of technologies and new opportunities stand in stark contrast with the desperate conditions faced by millions of others.

[quote quote=”To foster a thriving agricultural sector that is inclusive of smallholders and supportive of a modern, diversified economy demands nothing short of an agro-industrial revolution.” type=”text” ]

There is a risk that the emergence of modern value chains and supermarkets in the developing world will widen this gulf. It is true that the introduction of new technologies and sophisticated market systems, alongside growing urbanization, holds the promise of meeting growing demand for agricultural products while lifting millions from the depths of poverty. But if these market forces are handled incorrectly, they could leave smallholders without sufficient resources to resist becoming marginalized.

To foster a thriving agricultural sector that is inclusive of smallholders and supportive of a modern, diversified economy demands nothing short of an agro-industrial revolution. This revolution, at its core, must facilitate the development of strong links between markets and smallholders; in doing so, it will bring us closer to meeting the first Millennium Development Goal of halving global poverty and hunger by 2015. This ‘people-oriented’ strategy benefits producers and customers alike. By encouraging a marketplace that is both modern and inclusive, and by helping poor smallholder farmers enter those markets, we can improve the lives of millions living in poverty today — and feed the world’s population of tomorrow.

For far too many smallholder farmers, every day is a struggle to keep their heads above water; subsisting rather than profiting from their crops. Despite providing as much as 80% of the food locally consumed in Asia and sub-Saharan Africa, many of these farmers live inches away from crisis, fighting not to get ahead, but merely to survive. Without modern tools and techniques, yields are frequently too low to generate surpluses. Land and water are increasingly scarce and precious commodities. And commerce is further hindered by poor or non-existent infrastructure, and few buyers for small farmers’ produce — particularly in the more remote areas.

At IFAD, we are trying to find solutions to these challenges by asking ourselves two key questions: first, can a farmer who lives on the edge of destitution be expected to take on additional risk by investing in higher-yield crops? Second, is there a way for the smallholder to enter the marketplace without facing marginalization?

[quote quote=”By shifting our mindset to view smallholder farms as businesses seeking a profit, rather than a handout, we see remarkable progress.” type=”text” ]

The answer to both questions can be yes, and we have seen the success stories to prove it. One of them is Ahmad Abdelmunem Al-Far, who lives in Cairo and has become a successful entrepreneur. After joining an IFAD-supported project where he was granted a portion of newly reclaimed desert, access to a credit fund, systems for sewage and refuse disposal, and drip irrigation, Ahmad has built a thriving business. He now produces crops such as fava beans, onions, oranges, green peppers, and potatoes, and has joined 36,000 other participating farmers in the marketplace. These projects are successful because they recognize smallholders for what they are: potential entrepreneurs. By shifting our mindset to view smallholder farms as businesses seeking a profit, rather than a handout, we see remarkable progress.

IFAD supports projects like these in rural communities across the world, and in each region we see success stories like Ahmad’s. With help from our partners, we are able to fund projects to develop local infrastructure, including last-mile roads, irrigation and water control systems; we are helping to reduce post-harvest losses, and we are assisting farmers in improving the quality of their produce.

These improvements are critical, given the growth in the size and scope of supermarkets and the modern consolidated value chains that they have catalyzed in recent years. These supermarkets seek to provide high quality produce to their customers, and they impose ever more rigorous standards on their suppliers. They usually prefer to source from a few large suppliers, making it difficult for smallholder farmers to get a foothold in these new markets.

The transition from traditional to modern farming is often extremely difficult. To be successful, smallholders usually need support to run their farms as commercially-oriented businesses geared towards exploiting market opportunities. The Rural Poverty Report 2011 finds that smallholders usually require new skills and knowledge to increase their productivity and respond to market requirements in terms of quality and phytosanitary standards. They also need access to real-time market information to tell them what the market is looking for. While smallholders are vulnerable when operating alone, when they join forces to create rural producers’ organizations they can be highly effective. By forming these organizations, smallholders can bulk their demand for inputs and their marketed supply, and they gain greater leverage when negotiating with buyers, helping to ensure that they are given a fair deal for their produce. Navigating the modern marketplace becomes less daunting when there is greater security. Formal contracts can strengthen the trust smallholders place in the market. And as urban customers increase their demand for processed products, new employment opportunities are created for rural workers and smallholders alike.

There must also be a focus on access to credit, which remains a key element in the ability of the smallholder farmer to participate in, and capitalize on, new market forces. Many banks are now working in rural communities to help farmers manage the risks of marketplace entry, and agro-processors are also providing production credit to their suppliers. There have been dramatic results from increased lending, and, from now on, smallholders need expanded access to longer-term funding to enhance their confidence when entering the marketplace.

Full-scale agricultural development in rural communities will hinge on the assistance of numerous actors: policymakers and public services, civil society organizations, non-governmental organizations and donors all play a crucial role in helping smallholders to engage more effectively in modern value chains. We know that governments have the capacity to expand smallholders’ options when selling their products to local and global markets, and they can also increase public spending in agriculture. Private-sector investments can improve smallholders’ access to markets and assist in implementing policies that include, rather than exclude their products. Donors are able to encourage farmers to organize, as well as work towards obtaining fair deals in value chains. Finally, governments, donors, and the private sector, may all help make smallholder farming viable for women and young people.

[quote quote=”Private-sector investments can improve smallholders’ access to markets and assist in implementing policies that include, rather than exclude their products.” type=”text” ]

Today, many smallholders have unprecedented opportunities for economic and agricultural success. With training, organization and infrastructure, millions of poor people can escape the clutches of poverty. Rural women, men, and young people, may finally see the reality of profitable farming, and with that, the chance for better homes, education, and health for their families. As smallholders continue to enter modern markets, experience tells us that a flourishing rural economy will not be far behind.

Agricultural growth is the driver of economic growth. This has been true across the centuries, and throughout the world, from 18th century England to 19th century Japan, and to 20th century China. With new agricultural development comes a vibrant rural life – both on and off the farm. Sixty per cent of the world’s rural population falls between the ages of 15 and 24, and many of these young people will eventually be faced with a choice: stay in their rural regions to work, or seek employment in cities.

To feed a hungry world, we need these young women and men to remain in rural communities and become contributing members to the rural economy. We need them to become modern smallholders, earning profits in the marketplace, but they also must have options for employment in rural non-farm work. Each dollar invested in agriculture generates between 30 to 80 cents in second-round income in the economy. This shows that profitable farming is critical not just for its own sake, but for its impact on the larger economic environment. Creating local demand for goods and services leads to non-farm employment and small-scale manufacturing, which in turn spurs agricultural growth.

Towards a prosperous future

We need only look to rural farmers in Ghana, the United Republic of Tanzania, and Viet Nam, to understand just how smallholders can lead agricultural and economic growth in the developing world. Indeed, GDP growth generated by agriculture is at least twice as effective in reducing poverty as growth in other sectors. Through sustained investment in the value chain, we can build on these successes and ensure that agriculture becomes an even more effective method for reducing poverty in rural communities.

[quote quote=”With smart incentives, creative thinking, and strategic support, many smallholders will not only be able to survive, but prosper.” type=”text” ]

The coming decades will bring real and fundamental changes to the way smallholders live and operate their farms. The risks are apparent, but the possibilities are abundant. The climate change challenge is real and we must ensure that our efforts are environmentally sustainable. But with smart incentives, creative thinking, and strategic support, many smallholders will not only be able to survive, but prosper. Agricultural growth through modern markets holds the potential for a life of greater financial security, stronger education, and better health care. In short, the marketplace may become the means to a better life.

Development will need to come from within the countries themselves, if we are to see the large-scale change that is needed to meet the Millennium Development Goals and to feed future generations. When developing nations make rural agricultural growth a priority, we can help sustain and support their efforts. There is no single magic policy that will work for all regions, but with a smart, locally-focused approach, millions can rise from the depths of poverty and achieve prosperity. IFAD remains committed to achieving this future. Smallholders will lead the way, and we will continue to lend a hand.

Kanayo F. Nwanze began his term as the fifth President of the International Fund for Agricultural Development on 1 April 2009. A Nigerian national, Nwanze has a strong record as an advocate and leader of change and a keen understanding of the complexity of development issues. He brings to the job over 30 years of experience across three continents in poverty reduction through agriculture, rural development and research. He has published extensively, is a member of several scientific associations and has served on the executive boards of various institutions. Nwanze has received numerous honours and awards from governments and international institutions, including Commander of the National Order of Merit of Côte d’Ivoire and Officer of the National Order of Benin.

Climate, Food and the Connectivity Paradox