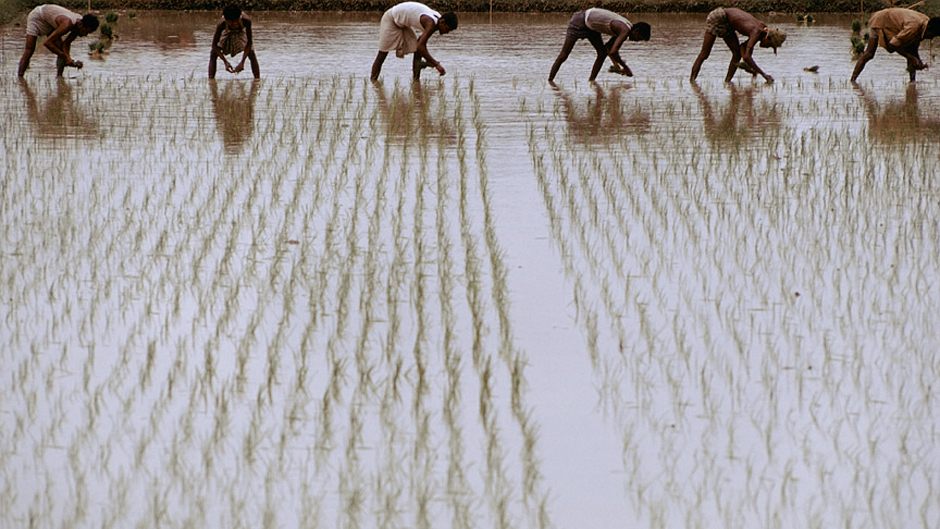 Food prices have fallen significantly from their peak last year — but that doesn’t mean that policymakers can start heaving sighs of relief.

For one thing, prices remain acutely problematic for poor people and poor countries at their current levels. Moreover, they are poised to resume their upwards climb when the world emerges from the downturn.

Accordingly, policymakers need to treat the current easing in prices as a window of opportunity in which to agree the comprehensive, long-term collective action needed to ensure food security for all in the 21st century.

This is the central argument of The Feeding of the Nine Billion, a new report on food prices and scarcity issues published by Chatham House.

The report argues that long term demand drivers — a population set to reach over 9 billion by mid-century, and the rising affluence and expectations of a growing ‘global middle class’ — are half the story: the World Bank forecasts 50% higher demand for food by 2030.

At the same time, scarcity issues will present increasing challenges on the supply side.  Oil prices are set to resume their climb after the downturn, given that investment in new production has collapsed as oil prices have fallen, setting the stage for a future supply crunch.

Food prices are likely to follow them, as biofuels, fertiliser prices and transport costs play their part.  Climate change, water scarcity and competition for land will all also push prices upwards over the longer term.

So what needs to be done?

First, we need to get a 21st century Green Revolution underway, and fast.  Spending on agriculture by aid donors and developing country governments has collapsed over the last 25 years.

A similar story applies on research and development. The core task here is to move from today’s unsustainable, input-intensive model of agriculture to one that’s instead knowledge-intensive.

Genetically modified crops could have a part to play — but more ecologically integrated approaches (like integrated soil fertility management) often score higher on equitability and social resilience, given that they diffuse power among farmers rather than concentrating it with seed companies.

Second, we need to scale up social protection systems in developing countries. Today, nearly a billion people don’t have enough to eat.  But as can be seen from the fact that another billion are overweight or obese, the problem is not that there’s insufficient food to go around. Instead, it’s simply that poor people find food prices beyond their reach.

Social protection systems, like food safety nets, unemployment benefits or school feeding programmes, are a better bet for developing countries than price controls or economy-wide subsidies — because they target help where it’s needed, and don’t break the bank. As yet, however, only 20% of the world’s people have access to them.

Third, there is much to do in the trade context.  One option for policymakers to consider is a globally coordinated system of food stocks, similar to the International Energy Agency’s system for managing oil reserves in an emergency, which would be a way of building resilience to the kind of volatility seen last summer when panic over food prices set in.

They also need to think about ways that trade rules can help manage the risk of export suspensions, given that WTO trade rules were built to resolve disputes over market access, not to ensure security of supply.

And it remains imperative for developed economies — above all the EU and US — to reform their farm support policies, which have the effect of structurally undermining developing country agriculture.

Finally, there remains the observation that (as Gandhi once put it) there’s enough for everyone’s need, but not for everyone’s greed. The global consumer class has barely begun to recognise that its ‘western diet’, rich in meat and dairy products, is far more resource intensive than everyone else’s, whether in terms of grain intensity, water use, energy consumption or greenhouse gas emissions.

That doesn’t mean everyone has to be vegetarian, but consumers do need to face up to the issues of fair shares involved.

A similar point applies on biofuels. Not all of them are problematic — but grossly inefficient options like corn-based ethanol have no place in a sustainable or equitable agriculture system.

Reasons to be optimistic

Inevitably, the question arises of whether the credit crunch and global downturn have concentrated policymakers’ minds on short term economic concerns.  There are worrying signals that aid spending is already starting to fall.

On the other hand, it’s encouraging that the multilateral system remains strongly focused on the triple crisis of food, energy and climate change (as an Intenational Monetary Fund official told me earlier this month, “the last thing we can afford now is another crisis creeping up on us”).

Another reason for optimism is the astonishing tale of innovation that is the history of agriculture — and the prospects for more of it in the future.

At the same time, innovation on its own is clearly not enough. The 20th century Green Revolution achieved huge improvements in yield, for instance, but also put huge numbers of agricultural labourers out of work, benefited larger farmers first and small farmers later (if at all), and largely bypassed Africa.

Technical innovation must be matched by political sophistication — and real commitment to social justice.

Above all, there is the hopeful fact that while agriculture has taken 10,000 years to get to where it is today, we could — with hard commitment, but not much sacrifice — reach the more productive, more sustainable, more resilient and more equitable food system that we need within a decade.

Storm clouds — economic and otherwise — are gathering. But the prospect of concluding a quest that has lasted the whole duration of human history now lies within reach: ensuring that each of us can live each day of our lives secure in the knowledge that we’ll have enough to eat at the end of it.

Feeding the nine billion by Alex Evans is licensed under a Creative Commons Attribution-NonCommercial-ShareAlike 3.0 Unported License.

Alex Evans is a Non-Resident Fellow at the Center on International Cooperation at New York University and editor of the foreign policy blog, GlobalDashboard.