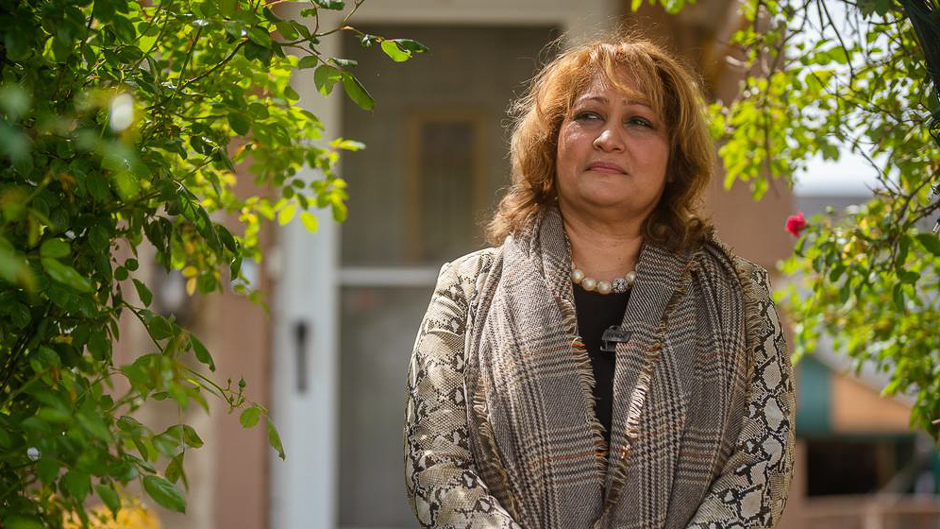 As extreme weather events grow in intensity and frequency, nowhere is guaranteed to be safe from danger, as New Yorkers discovered on 1 September 2021 when Hurricane Ida struck causing floods that led to some 29 deaths and shut down much of the subway system. Amrita Bhagwandin was at her home in the New York Borough of Queens on that traumatic day.

“I emigrated from Guyana in 1998 and have lived in Queens ever since. I live with my husband and my daughter. We are a small family but have many relations in New York and New Jersey.

The community here is very diverse, from Guyanese, Trinidadians and Bengalis, to Indians, Chinese, and Filipinos. We are a very happy bunch of hard-working people. We plant gardens, we send our kids to colleges, and do all kinds of things to give back to the community.

On 1 September, when Ida hit, I was working from home. I switched on the television to get the alerts; it was clear a storm was brewing. I focused on the radar and followed the storm on the map. It looked like it was going to come through the northeast. When I saw how much red there was, I knew it was definitely going to affect us.

Some improvements had been made on the storm sewers on our block in the previous year, so I was hopeful that we would not feel the impacts too hard. But as the afternoon approached, I saw how many hours of rain they were forecasting. I became very worried, and I started to warn the neighbours to be very careful that night.

Usually, if there is a sign of flooding, I leave the house because I get panic attacks from the situation. So, I packed a bag and I said to them, ‘let’s leave’. My husband and daughter initially wanted to stay and so my husband just dropped me off at my in-laws’ who live on higher ground just down the block.

I kept calling both of them and around 10:00 pm I told them they needed to leave the house. Right after I called them, the sewer hole right in front of my house popped. They barely made it out and drove up the block to my sister in-law’s.

‘They lost their lives in a matter of seconds’

We live on the corner of an intersection, and the water filled each side and went four directions. I was calling to make sure everyone was safe when I was told that someone was missing.

Eventually, I found out that the mother and her son living next door to me had both drowned and died in the basement.

I don’t have the words to tell you the pain that this neighbourhood has gone through since. I see that kid every single day. He was so young and vibrant, and so was his mother.

They lost their lives in a matter of seconds. There were even scuba divers trying to get them out, but it was to no avail.

‘We are frightened and scared’

These houses should not have been here in this low-lying area. We have been sounding the alarm for a very, very long time.

I hope that in New York City everyone is now consciously paying attention to what the weather is doing, so no more lives are senselessly lost. With the amount of rainfall we are seeing and the number of storms that are expected for this upcoming summer, we are frightened and scared.

I don’t know what I’ll do because the foundation of my house has still not been repaired because it is so expensive.

It seems that the area is just too low for residential housing. The engineers of the Climate Resiliency Agency of New York City worked with us, and proposed a trial of lifting the houses. There are many different options, but the option is not to stay here as it is.

Everyone on our block lives in constant fear. When I see rain on the radar, I want to escape. I have luggage packed so I can leave.

Ida is an experience we should learn from and not let happen again. Climate change is going to be there. Changes are going to happen all the time, and we have to equip ourselves for them.

I want to know what the future of this community is going to be. What is to happen? Will I sit and worry for the next people who come and live here? I want a safer community for everyone, for all of America, for every community.”

This UNU-EHS article was first published by UN News. Read the original article.