Fishers of Eurasian Arctic Come Together in a Time of War 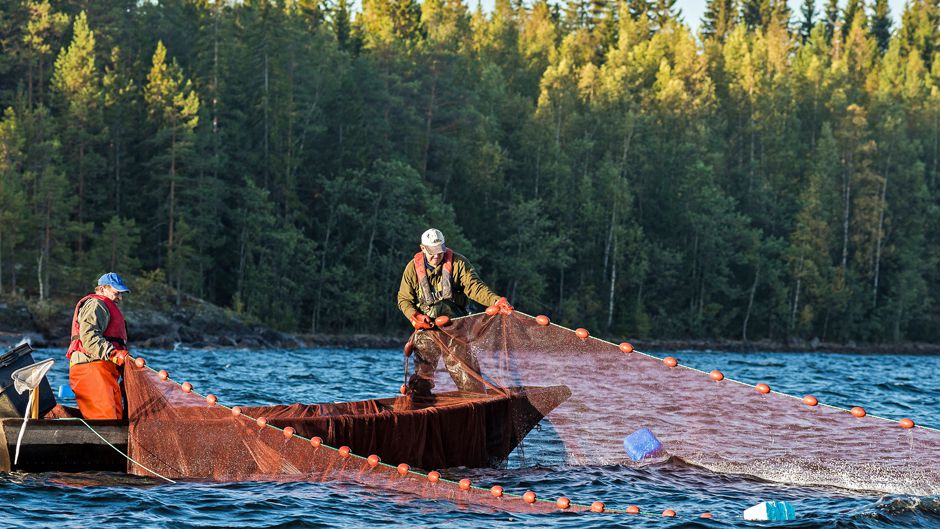 Once upon a time, not very long ago, Mr. Olli Klemola, had a vision. A professional Finnish fisherman and keeper of his people’s traditions, he envisioned a festival to be held in his homeland that would bring together indigenous and local fishermen from across the Arctic to discuss the issues critical to their survival that have been largely absent from most Arctic-focused debates, discussions, and gatherings. The gathering would focus on important issues for the Finno-Ugric peoples of Finland, Sámi areas and Siberia. The delegates would share their traditional knowledge related to fisheries, celebrate their songs and handicrafts, demonstrate their harvest methods, as well as discuss their accomplishments in watershed restoration.

As the war between Russia and Ukraine rages on, it places escalating pressure on the indigenous peoples of Eurasia, especially in Russia, diminishing the opportunities for them to meet and discuss their peaceful traditions of living off the land and water. For local communities and indigenous people on both sides of the divide, it is increasingly difficult to share their know-how of reviving and sustaining their place-based traditional knowledge, practice and wisdom.

It is, therefore, very opportune that this fall, the Snowchange Cooperative — a non-profit NGO and a long-term partner of the United Nations University’s (UNU) Traditional Knowledge Initiative — together with its local partner Saa’mi Nue’tt, began transforming Mr. Klemola’s vision into a reality. Despite the challenging geo-political conditions, the Festival of Northern Fishing Traditions, held in mid-September, brought indigenous Skolt, Kola and Swedish Sámi together with Siberian Khanty and Finnish traditional fishermen.

This unique gathering was a deep exchange of community-based solutions to the challenges of environmental and cultural degradation and climate change faced by all of the peoples of Northern Eurasia. 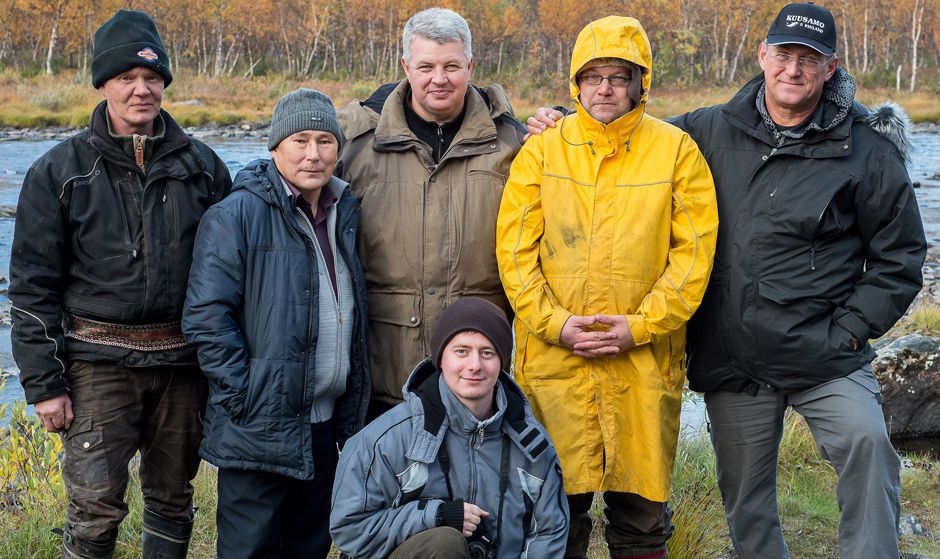 And where better for such a meeting to take place than one of Northern Europe’s most pristine lakes? Lake Puruvesi in North Karelia, Finland, with water visibility down to 12 meters, maintains a EU-certified sustainable fishery for vendace, as European Cisco (Coregenus albula) is called here. Lake Puruvesi and neighbouring lake Saimaa are now globally-recognized for their biodiversity — the water system is home to the now extremely endangered lake-bound Atlantic salmon (Salmo salar m. saimensis) and unique Saimaa ringed seals (Pusa hispida saimensis), numbering only in hundreds.

It is here that the Snowchange Cooperative brought a large delegation of indigenous people and fisheries officials from Siberia, where they spent four days participating in traditional Finnish fisheries using seine-nets and fish-traps. Modern-day seining is a unique lake fishery steeped in ancient tradition. The world’s oldest net was found about 300 kilometers from Lake Puruvesi, and was dated to be over 10,000 years old. Through millennia, this traditional fishery has maintained healthy fish stocks.

After the first part of the Festival wrapped up in Puruvesi, the Siberian Khanty delegation and Finnish fishermen travelled to the village of Sevettijärvi, home of the Skolt Sámi, indigenous peoples of the European North, whose traditional territory had historically spanned from the eastern shores of Lake Inari to the western part of the Kola Peninsula, part of modern Russia. Chief Veikko Feodoroff, the leader of the local Skolt Sámi, welcomed the delegation by emphasizing that this is the last remaining village where the endangered Skolt Sámi language is still spoken. Having survived re-locations, several wars, colonial intrusion by Finnish settlers and loss of culture and language, the Skolts are making an impressive comeback to re-build their traditional land-use and management institutions, revitalize their culture and land-based practices and address climate change impacts in innovative ways. 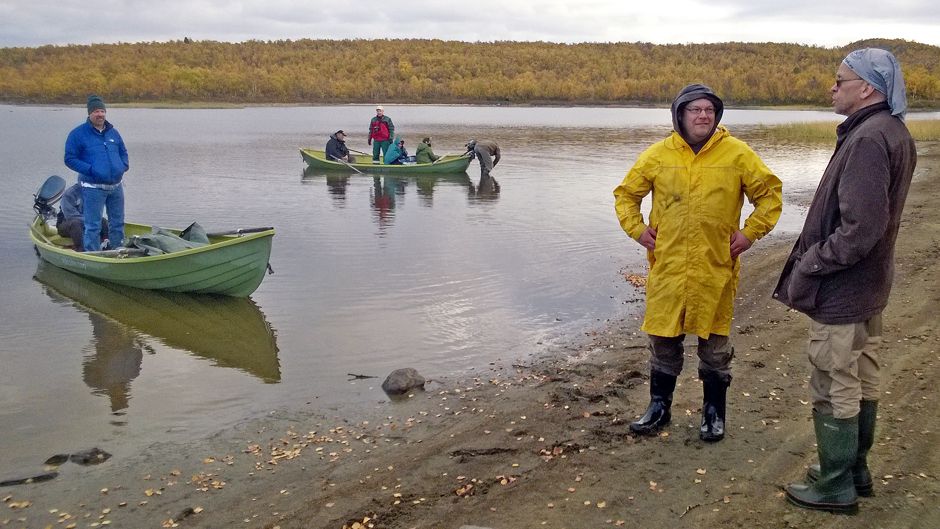 The Festival participants traveled on the river Näätämö for over 20 kilometres to learn about the first co-management project in Finland that recognizes Sámi traditional knowledge and wisdom. In the forefront, Tero Mustonen, talks with Stefan Mikaelsson (far right), the President of the Swedish Sámi Parliament and a reindeer herder, Lake Opukasjärvi, Skolt Sámi traditional territory, Finland. Photo: © Virve Sallisalmi, 2014.

This second part of the Festival kicked off with a round-trip hike of over 15 miles to the Näätämö, the central waterway in the Skolt Sámi world. More delegates arrived from Finland and other countries, including Mr. Stefan Mikaelsson, the President of the Swedish Sámi Parliament and representatives of the Kola Sámi from the Murmansk region of Russia.

The visit to the Näätämö River enabled participants to share the local experiences of relying on traditional knowledge and land-based practices to heal the legacy of past social, cultural and environmental disruptions such as displacement, loss of language, diminishing inter-generational knowledge transfer, and climate change impacts.

The Näätämö catchment area is the site of the first collaborative management plan in Finland, coordinated by the Saa’mi Nue’tt cultural organization in partnership with the Snowchange Cooperative and supported by UNU and the Nordic Council of Ministers. In addition to documenting environmental observations and historic land use in the area, the co-management fisheries plan for Näätämö salmon aims to create enabling conditions for bringing the traditional knowledge of the Skolt Sámi into the management of this Atlantic salmon-spawning river. This management includes ecosystem restoration of Atlantic salmon spawning grounds and control of predator fish that have been proliferating with rising water temperatures due to climate change.

Combining science and indigenous knowledge, the efforts along the Näätämö River are leading to the restoration and preservation of watersheds in the increasingly changing Arctic. The co-management plan finally makes visible the traditional Skolt Sámi family- and clan-based uses of the river to the Finnish authorities. This is the first necessary step in ensuring that the Skolt Sámi knowledge is taken seriously in decisions about managing the watershed and salmon stocks. 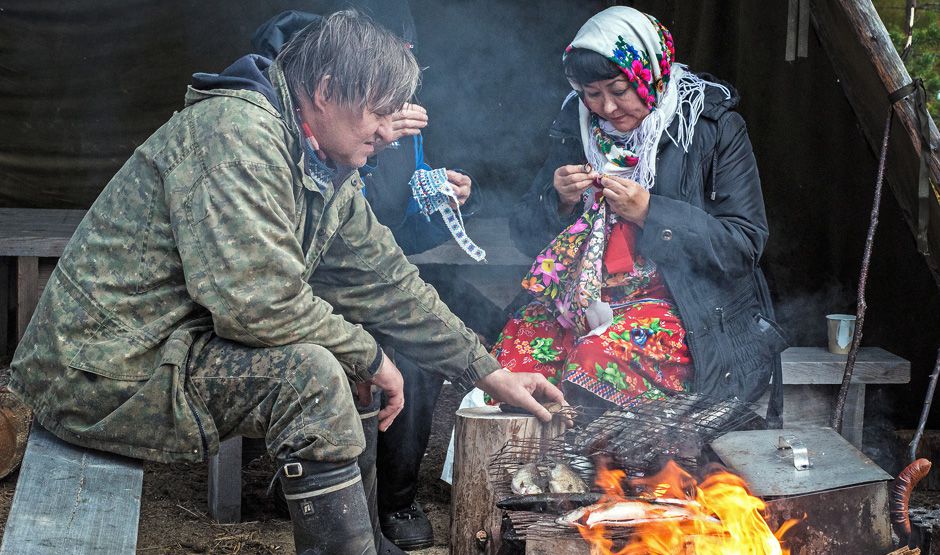 The Khanty delegates, in turn, shared their experience of forming the non-governmental organization “Save Jugra” in the 1990s to combat negative impacts of rapidly expanding Russian and international oil and natural gas industries. The Siberians, who have been struggling with vast environmental impacts to their traditional lakes and rivers, welcomed the exchange of experiences and approaches with their brothers and sisters from the Näätämö River watershed.

Early Saturday morning, on the last day of the Festival, all participants gathered on the shores of Lake Sevettijärvi, next to the village school and tribal offices of the Skolt Sámi. Cold sun rose above the mist coming from the lake. It was below freezing — a sign of approaching winter — great time to go seining.

Vladimir Feodoroff, a Skolt Sami Elder, together with his younger brother Juha and a few helping hands from the international delegation, took the seine net out on the lake. On the shore, everybody waited for the nets to be set. When a signal was given, the delegates from Skolt Sámi, Luleå Sámi, Kola Sámi, Americans, Siberian Khanty and other nationalities started to pull the seine. 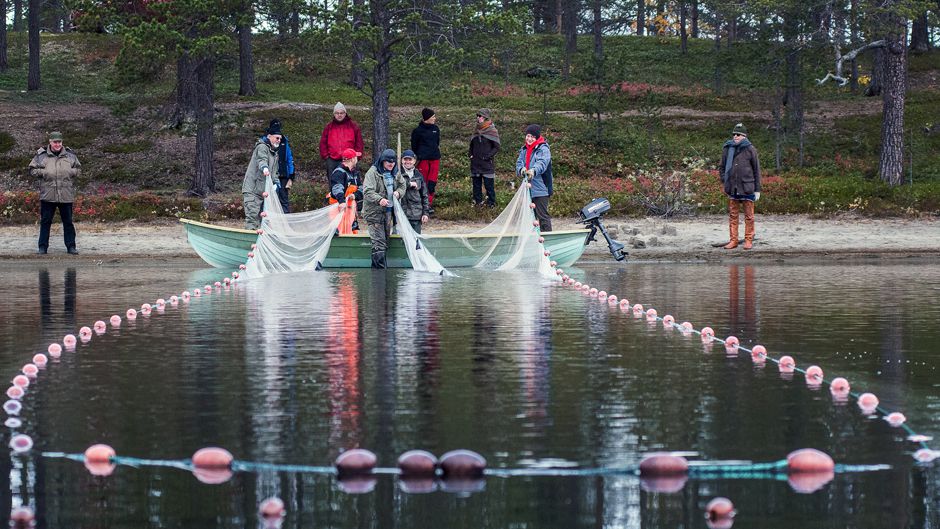 Suddenly, a song broke out: “We are seining! We are trying to catch fish!” By the time the seine approached the shore, everybody was singing the same song — in different languages but with the same voice. The song reverberated across the lake and the seine came in brimming with a lot of whitefish! The delegates had no doubt that the lake heard the song of the people working together, as we all should in this time of vast changes in the Arctic and around the world. What a great ending to the Festival!

With that song of peace, in the current time of war, Olli Klemola’s dream of bringing traditional fishers from around the Eurasian Arctic was finally realized and is bearing fruit. The next festival is already being planned for 2015 in the Khanty Mansi Autonomous Region of Siberia, Russia. Join us, so that we can pull the seine together!

Fishers of Eurasian Arctic Come Together in a Time of War by Tero Mustonen and Gleb Raygorodetsky is licensed under a Creative Commons Attribution-NonCommercial-ShareAlike 4.0 International License.

Dr. Tero Mustonen, a passionate defender of traditional worldview and cosmology of his people, is a Finn and head of the village of Selkie in North Karelia, Finland. He has worked as the traditional knowledge coordinator for Eurasia for the Arctic Biodiversity Assessment. Professionally, he works for the award-winning Snowchange Cooperative, which is a non-profit organization based in Finland with members across the Arctic, including the communities of Eastern Sámi, Chukchi, Yukaghir, Sakha, Evenk, Even, Inuit, Inuvialuit, Gwitchin and many more. Mustonen is well-known scholar of Arctic biodiversity, climate change and indigenous issues, having published over a dozen publications on the topics including the ground-breaking Eastern Sámi Atlas and Snowscapes, Dreamscapes. He lives in the middle of the last old-growth forest in Selkie with his wife, Kaisu, two goats and 10 chickens without running water. He is a winter seiner. Mustonen has won several human rights and environmental awards for the work with Snowchange and indigenous peoples of the Arctic. He is also an adopted full status member of the Kwakwakwala First Nation based in British Columbia, Canada.