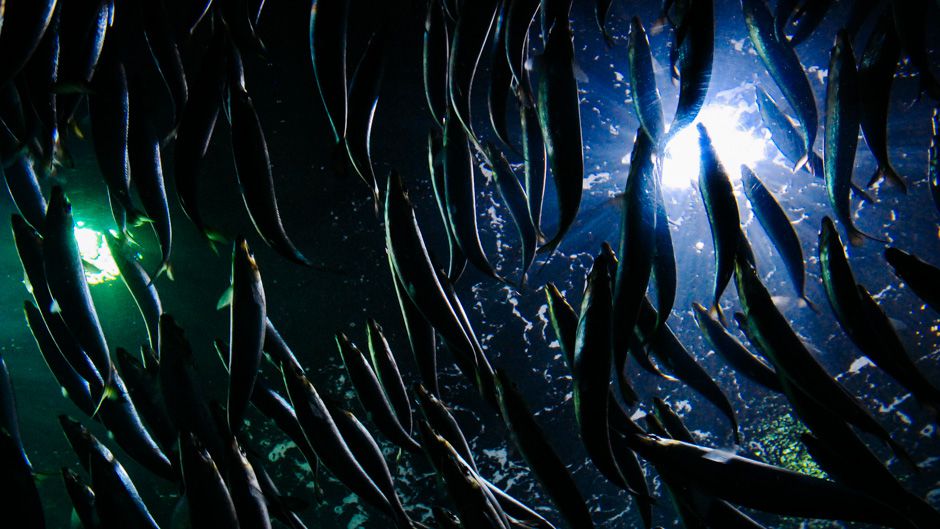 In what many are calling a dangerous and reckless move, in November of 2011 Canada’s Minister of Fisheries and Oceans opened a massively scaled-up winter herring fishery on the country’s west coast.

To take last winter’s 238 tonnes total harvest weight and increase it to an unprecedented 6,000 tonnes could knock back all the recent small recoveries of many local resident herring populations in the Salish Sea, a large area of coastal waters off of British Columbia, Canada, and Washington state in the United States.

The naming of these international waters honours its earliest settlers, the Coast Salish peoples, and the rich ecosystem they’ve called home for thousands of years. Herring is a cultural keystone for these local First Nations aboriginal peoples as well as a keystone species — a species with a critical role in the structure of an ecological community and an impact greater than would be expected based on its relative abundance or total biomass. From Saanich Inlet and the Gorge to Ganges Harbour and Howe Sound, herring are vital to hundreds of other species including chinook and coho salmon and the endangered resident orca protected under Canada’s Species at Risk Act (SARA).

The recklessness of the government’s herring decision is magnified by the fact that the minister has already been found guilty in 2010 of failing to protect the food source of the endangered orca (which is also known as killer whale but is in fact the largest member of the dolphin family, Delphinidae).

Orcas are at risk because of small population size, low reproductive rate, and the existence of a variety of anthropogenic factors that can prevent recovery or cause further decline.

SARA was introduced in 2003 and includes prohibitions against harming or interfering with species at risk — from killing and capturing to buying, selling and collecting. It also prohibits destroying the critical habitats and residences of protected species. The job of the Department of Fisheries and Oceans Canada (DFO) is to protect and recover aquatic species at risk via implementation of conservation and protection measures. 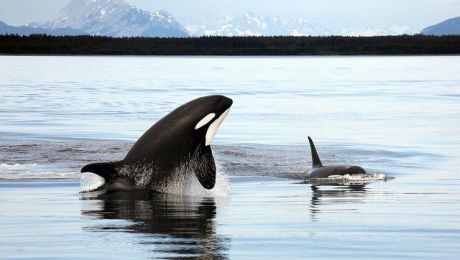 According to DFO’s orca recovery strategy report, orca populations are at risk because of small population size, low reproductive rate, and the existence of a variety of anthropogenic factors that can prevent recovery or cause further decline. These threats include environmental contamination, reductions in the availability or quality of prey, and both physical and acoustic disturbance. Even under the most optimistic scenario, the species’ low intrinsic growth rate means that the time frame for recovery would be more than one generation (25 years).

In the historic ruling, the courts found it was unlawful for the minister to exercise discretionary powers regarding the protection of critical habitat under SARA, and to exclude elements of the definition of “critical habitat” from the scope of protection plans.

“Despite requests, the federal government has refused to clarify what aspect of critical habitat they intend to protect saying that the nature and scope of the critical habitat will be determined over time through trial and error,” explains one of the conservation organizations that filed the lawsuit.

So why would the minister ignore his legal obligations and decide to bump the catch allowance up so massively? Despite his precarious position legally (he is currently appealing Justice Russell’s ruling), despite the data that the case has uncovered about these animals and their needs, and despite the recent announcement that the Salish Sea National Marine Conservation Area is moving ahead, the minister has still signed off on an increase that could wipe out the just-recovering resident stocks and thereby push the orcas and the rest of the ecosystem to the brink.

To understand the rationale, you just need to go to page 95 of DFO’s recently released herring fisheries plan where it states that the reason for this increase to the scale of the fishery is simply that industry asked for it.

“As a result of increased interest in this fishery and development of global markets, and as recommended by the Herring Industry Advisory Board (HIAB), the allocation to this fishery will be 6,000 tonnes (100 licenses) for the Strait of Georgia area for the 2011/2012 season.” The HIAB is an industry-dominated board that wasn’t asked to consult with the wider scientific community on how this might impact the orca.

A refusal to recognize the important differences between resident and migratory herring stocks lies beneath this sad state of herring management. First Nations have been arguing for recognition of local versus migratory populations since the 1930s, when the resident populations first started declining. A single DFO paper back in 1990, assessing abundance of resident populations, concludes that they were at very low levels.

Yet currently, DFO has no stock assessment process for the resident stocks, only migratory stocks, so all Salish Sea herring are officially considered part of one “metastock” by DFO.

The resident populations, once used for sport fishing live bait, remain so depleted that the “bait ponds” are today unable to operate. The winter fishery is traditionally when this bait fishery was carried out — between November and February — and is opened throughout the Strait of Georgia region with some small exceptions. For years it has never been more than a couple of hundred tonnes, mostly because there has been neither demand nor supply. 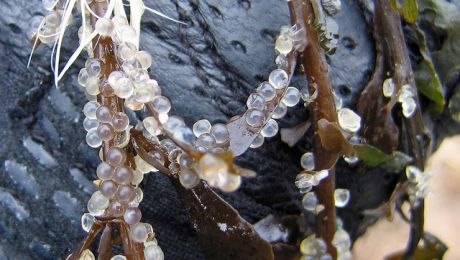 However, the Strait of Georgia doesn’t have a sport fishery anymore. The roe herring fishery on the other hand (dominated by the privately-owned Canadian Fishing Company or Canfisco) that starts in March, is opened when and where the last large migratory stock still spawns, between Hornby and Qualicum Beach.

This is the population that DFO will say is at “historic levels” and “still healthy”. But because it appears that DFO’s researchers have never unravelled the complex biology of the migratory and resident herring stocks (even though there are differences in timing and characteristics of spawn), they are operating on flawed information, experts say.

Professor Tony Pitcher, founding Director of the Fisheries Centre at the University of British Columbia, is internationally recognized for his work on restoration of marine ecosystems and stocks around the world. He states that there is much evidence of difference between the stocks.

Herring spawns bring back salmon, birds and marine mammals that are all-important for tourism and local economies, as is the spawn on kelp fishery for First Nations.

“Both Atlantic and Pacific herring life history theory, genetic evidence and historical records support the existence of local resident stocks of herring alongside larger, highly migratory stocks. In the Strait of Georgia, resident stocks were decimated by overfishing, especially by the reduction fishery [herring caught and reduced down to oil and fertilizer by reduction plants] in the 1960s; reports suggest that a few of these stocks have begun to recover. Fishing for roe on the spawning grounds of the highly migratory herring should not affect these smaller resident stocks, but fishing when the herring stocks are mixed outside the spawning season could easily prejudice these recoveries.

“Stock assessment based only on the large migratory stock will not be sufficient to allow for this: at the very least, the numerical procedures would need to be adjusted to allow for a reasonable range of assumptions about the mixed stock details. Therefore, fishing Strait of Georgia herring during the winter should be treated with extreme caution.”

There has been no caution; on the contrary, only a reckless disregard. The implications are huge to residents of this area. The return of the herring after decades has been a huge cause for celebration. Spawns bring back salmon, birds and marine mammals that are all-important for tourism and local economies, as is the spawn on kelp fishery for First Nations. The latter is a non-kill fishery where a portion of spawn was collected on kelp laid out by local communities, and the fish and the remainder of the spawn were left to live and thrive in their natal home.

Since even a 200 tonne fishery can wipe out a small recovering population, various groups, First Nations, and scientists like Pitcher have called for the fisheries minister to exercise caution. Many advocates are asking for a full moratorium on the whole fishery until stocks recover in the Salish Sea. Environmental groups who successfully challenged the minister on his failure to protect the food of orca could well point to this decision as continuing evidence that he has absolutely no interest in conserving the health of this coast.

Meanwhile, perhaps real pressure is beginning to build. In a report released on 2 February, an expert panel of the Royal Society of Canada (Canada’s national academy) finds that SARA is ineffective at protecting and recovering marine species, that the Fisheries Act is limited by regulatory conflicts, and that the minister has too much discretionary power.

This is an adapted version of an article that originally appeared on Focus Online magazine.

Naturalist and writer Briony Penn lives in Fulford Harbour, Salt Spring Island, where the last big herring spawn was in 1983. Since the herring disappeared, so have many other wild creatures. Dr. Penn received her Ph.D. in geography from Edinburgh University and is the author of “A Year on the Wild Side” and “The Kids Book of Geography”.