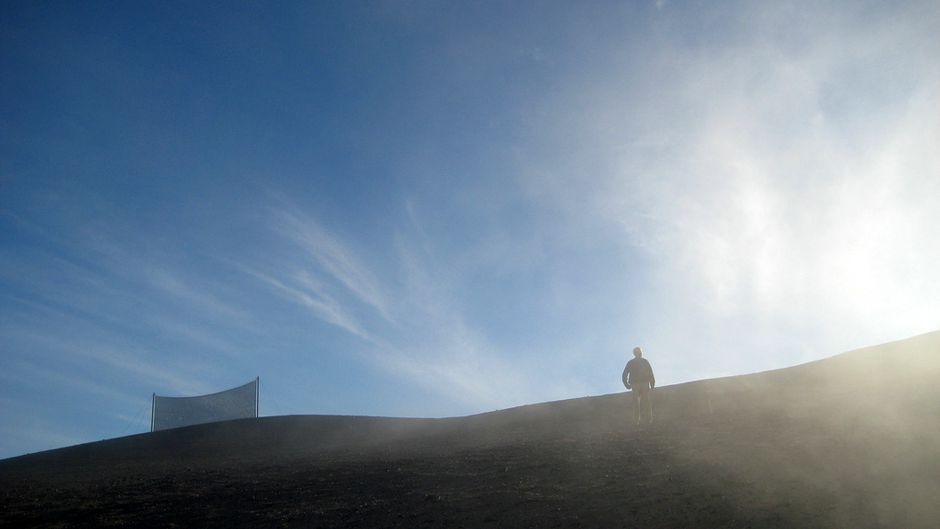 “This is one of the best beers that I have ever tried,” says Andrés Barrera. My friend is enjoying a craft beer called Atrapaniebla — Spanish for fog catcher — an ale made with water condensed from mountain fog on two fog catchers. The microbrewery that produces it, located in Peña Blanca (some 360 kilometres north of Santiago, the Chilean capital), is one of the first Chilean enterprises to make use of fog-catching technology; others use it to water tomato and aloe vera crops.

“Water from fog catchers has less nitrite and nitrate than the drinking water in the north of Chile, which is good for beer,” says Miguel Ángel Carcuro, 29-year-old co-owner of the microbrewery that makes Atrapaniebla.

Of course, while beer is nice, water is essential and fog catchers can be a great way to provide this sometimes scarce commodity. Carcuro’s interest in this technology stems from teenage travels with his father, who showed him a hill above the bay of Chungungo, where there were the remains of fog catchers that had until recently provided water for 100 families. 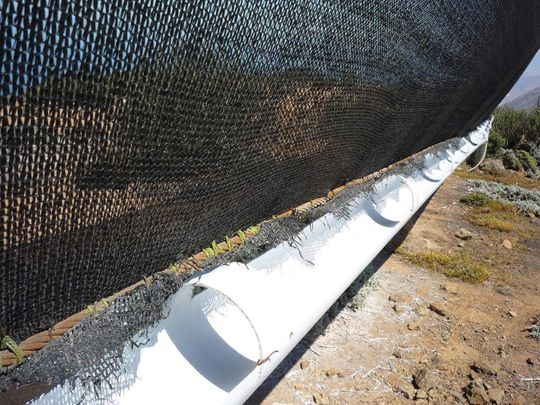 Fog catchers, fine mesh nets erected on foggy hillsides, capture tiny droplets of water from fog that later, when enough droplets have been caught, drip down into gutters. This fresh water can be stored in tanks. Fog catching has been used in Chile for human consumption and watering for more than 50 years, mostly at altitudes of 600 to 1,200 metres above sea level.

Recent innovations, such as the development of probes to find the best places to install fog catchers and novel mesh fabric promise to boost water capture further.

And now scientists are on the cusp of moving this activity from an artisanal to an industrial level, with a range of experiments underway in Chile to improve the cost-effectiveness of harnessing fog for fresh water.

Around 2,000 kilometres of the Chilean coast — from south of Arica (Chile’s northernmost city) to south of Santiago and including the Atacama Desert, one of the driest areas of the planet — could benefit from this technology.

But other areas could benefit, too. Canadian charity Fog Quest, for example, has already installed fog catchers in other arid and semi-arid places in Latin America and the Caribbean (Dominican Republic, Ecuador, Guatemala, Haiti and Peru), Africa (Eritrea, Ethiopia, Morocco and Namibia) and Asia and the Middle East (Nepal, Oman and Yemen).

The geographer Pilar Cereceda, who has worked with fog catchers for 34 years, led the project at Chungungo that inspired the teenage Carcuro, until it was eventually abandoned around 2000 after falling into disrepair.

“I had a theory that did not work out. I thought if we were able to provide water to one bay, everyone else would copy the idea. The system worked perfectly between 1992 and 2000, until the authorities decided to install a desalination plant,” explains Cereceda.

She thinks the problem was twofold: passive population and non-innovative state. “People were used to everything being handed to them. And, at that time, the state was not interested in innovation,” she says, “but the situation has changed”.

For example, Chile officially celebrated 2013 as a ‘year of innovation’ and Cereceda now works with communities, such as the one in Peña Blanca, that have taken on the fog-catching technology. This unusual town has fog catchers for its own use and is leasing some land on a hill to the microbrewery which built a couple of their own fog catchers there. It is also involved in a citizen science project with experimental fog catchers run by the Atacama Desert Centre at the Catholic University of Chile (CDA-UC), a facility Cereceda created in 2006.

“We have had a project for over two years. We have learned from the practice in the field,” says Daniel Rojas, the president of Peña Blanca’s agricultural community, which includes 85 families spread out over 6,500 hectares. Every two weeks, he travels to the top of the Cerro Grande hill, where the six small, experimental fog collectors are located, to measure how much water they have accumulated.

But the community began to work with fog catchers much earlier. When Rojas took up his role 15 years ago, he knew he needed to combat the desertification and erosion that were increasing poverty and driving people away from Peña Blanca.

The solution came in 2005 through funding from the Global Environment Facility, an independent cross-sector financing organisation for environmental projects run by the UN Development Programme, which has enabled the community to build 12 fog catchers. In total, these generate 2,000 litres of water a day that is mainly used for reforestation. After this, Peña Blanca contacted Cereceda to tap into her fog-catching expertise. Together they have also developed environmental programmes for school students in the region.

“I think we are beginning a new stage of collecting fog. We are moving on from an artisanal phase to an industrial one,” says Cereceda.

In 1980, when she began in this field, there were just geographers working with scarce funding, mostly on basic science and simple measurements.

Now the CDA-UC has a multidisciplinary team, from engineers to designers, who come from different universities in Chile and abroad, including an association with the prestigious Massachusetts Institute of Technology (MIT) in the United States.

They are researching how to reduce the cost per litre of collecting water from fog, with the aim of making this technology economically competitive as a source of fresh water in northern Chile.

To do this, CDA-UC opened six experimental stations in locations across this area, including Peña Blanca.

“The cost is still high, mainly because of the initial investment and maintenance” to repair mesh damaged by the wind, explains Juan de Dios Rivera, a member of the CDA-UC and a professor at the Catholic University of Chile.

The researchers are working on different ways of reducing the costs. First, they are assessing the best places to install fog catchers, which involves measuring the water available in the fog and wind velocity. This is called the ‘liquid water flux’. It is also important to determine the frequency and duration of foggy periods.

Until now, a small fog catcher of one square metre, called a standard fog collector, has been used for studying the available liquid water flux of prospective sites, but it has proven not to be reliable enough. Instead, Richard LeBoeuf, professor at the University of the Andes, Chile, designed a probe that may help map the best places to install fog catchers.

“I can measure the velocity of the wind and the liquid water content in the flux. The idea is to use a wireless sensor network to make a liquid water flux map,” he explains. His Fog Finder System was a finalist in Vodafone’s 2014 Wireless Innovation Competition in June.

The objective is to create fog catchers that can be easily assembled by anyone, almost like Ikea furniture.

The second way of reducing costs is to improve the structural design of fog catchers. These are mounted in isolated areas and most of the assembly has to be done in those places, which requires a lot of resources to transport and pay specialists. The objective is to create fog catchers that can be easily assembled by anyone, almost like Ikea furniture.

And the researchers’ third approach is to make the meshes better at trapping droplets. A fog catcher in Chile collects between three and seven litres of water a day per square metre depending on its location.

To compete with the present costs of other water sources, catchers need to gather around ten litres a day. 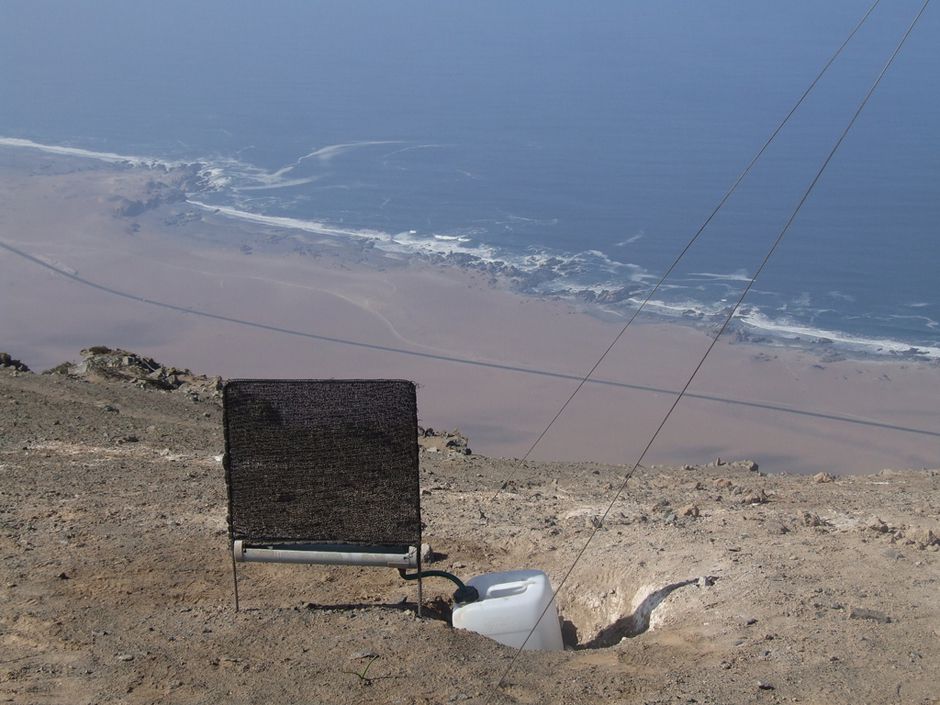 Until now, the most common mesh worldwide in fog catchers has been a polythene net produced in Chile called Raschel, originally created to provide shade. But when Rivera tested different meshes, he discovered that this is one of the least efficient. So far, the one with the best results in small fog collectors is called Kimre, produced by a company of the same name. But Kimre was created to collect the mist produced by some industrial processes in rather small, enclosed places, while the mesh of fog catchers is hung in open structures of up to 150 square metres.

Rivera is seeking to collaborate with Kimre to develop a mesh specifically for fog catchers.

In parallel, CDA-UC is working with a team led by Gareth McKinley and Robert Cohen from MIT and specialists in improving materials for collecting and draining water. They developed a mesh coating that increases water collection. In lab tests, they demonstrated that their optimised, coated stainless steel mesh could catch five times as much water as the standard Raschel net. This new mesh is now being tested at Peña Blanca.

With all these advances, Rivera thinks that fog catchers “will soon be mature enough to compete with small and medium-sized water desalination plants”.

From science to business

However, unlike Carcuro with his Atrapaniebla beer, the CDA-UC group is still searching for a business model. “We are more a technical and scientific team,” Rivera admits.

But it does not hold back his dreams.

“I imagine small enterprises will make use of this fog-catching technology in businesses, like the Atrapaniebla beer, that allow them and other people to make a living,” says Rivera, who hopes to celebrate winning further funding with a 12-pack of this unique brew.

This article was originally published on SciDev.Net on 26 Aug. 2014.

Fog Catchers Dream Big to Boost Water Security by Eliette Angel is licensed under a Creative Commons Attribution 4.0 International License. Permissions beyond the scope of this license may be available at Scidev.net/.