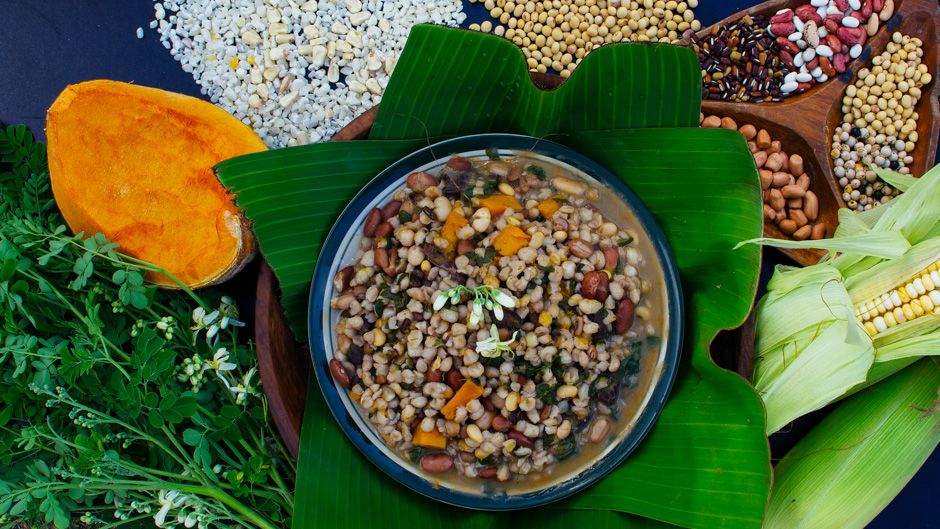 The links between food and peace are clear for those living and working in conflict-prone and food insecure environments. But what about for the many living in peaceful, stable countries with either abundant food or amicable trade links, or in built-up cities where the availability of food is taken for granted? What has food really got to do with peace? And are some foods more “conflict sensitive” than others?

To begin to think about this, it is intriguing to consider how chemicals, originally developed for use in war, were harnessed for a new purpose: industrial agricultural pesticides. Instead of being employed to incapacitate or kill the enemy in conflict, these chemicals began being used to to kill insects, weeds, soils and other living matter — with the upside being an increase in crop yields as the agronomists and economists decreed.

From the post WWII era on, and peaking in the late 1970s as the Green Revolution’s technologies and yield gains took hold, grain surpluses and low prices led to a drop in the number of hungry people in the world. However, those productivity gains have slowed since 1990 and the growth rate of food production has fallen below population growth. Today, still 852 million people go to bed hungry every evening. Meanwhile, somewhere along the line, we have collectively decided to let future generations deal with the dire longer-term consequences of the chemical craze: soil depletion and water pollution.

Another force to creep along during these decades was the amassing of power by agro-food multinationals that has spawned the birth of a new type of conflict: consumers fighting for accountability from corporate abusers.

In the 1970s, Swiss food mega corporation Nestlé began heavily marketing its infant formula to mothers around the world, including in many developing countries where it was known that local water sources were contaminated. The company was blamed for unnecessary disease and death of the most vulnerable infants who could otherwise have depended on much safer breast milk.

This precipitated a vehement boycott of the company’s myriad products that continues to this day. Such actions may not make a huge dent in Nestlé’s mammoth US$11.5 billion profit line and are countered by Nestlé’s public relations blitz ensuring us that breastfeeding is the best form of feeding.

But the size of this journey towards finding dietary sources with which we can feel ethically comfortable doesn’t mean we should avoid taking the little steps to begin it.

It is fascinating how, in most South East Asian countries, you see and taste virtually the same sweet chilli, fish and soy sauce cluttering the plastic tables of roadside and market stalls, even if the labels differ. One wonders what people used to do before the age of factory food, plastic packaging and added monosodium glutamate.

Of course the sauce reference is only emblematic of a broader trend of imported industrially-produced food replacing uniquely local products that used to help sustain people’s livelihoods. Travelling across the world we can see how we’re connected together through unhealthy soft drinks and chilli sauces, but often not through genuine peace.

A key issue here is that food that is better for us, the farmers and the environment is often more expensive. Fresh is best, but not usually cheaper than convenience foods, despite the myriad ingredients and elaborate packaging that these feature. The hyper-industrialisation, monoculturalisation (and, often, subsidization) of food is something informed humans intuitively recognise to be completely unsustainable. Industrial food can remain consistently under-priced because the “externalities” of its production — greenhouse gas emissions, soil and water pollution, costs to the health system and the social and mental impacts on the exploited workers — are not included in the sale price.

An economist might say that this is an apparent example of market failure. Yet we buy into this system regularly at the supermarket checkout where our wallets offer greater nourishment than our stomachs end up receiving. The so-called “market” is now the ultimate power and we all worship at its temple, even if we say we don’t really want to. The “invisible hand” is linked to the ‘invisible producer’ and ‘invisible environmental damage’.

The consequences of increasing economics of scale at the global level also include farmers displaced by the phenomenon of land grabs and the hidden animal prisons that are the norm of industrialized ‘meat production’. Is there anything less peaceful than the rampant abuse and overwork that migrant workers face or the thousands of inhumanely confined, drugged-up beasts ready for the slaughter? 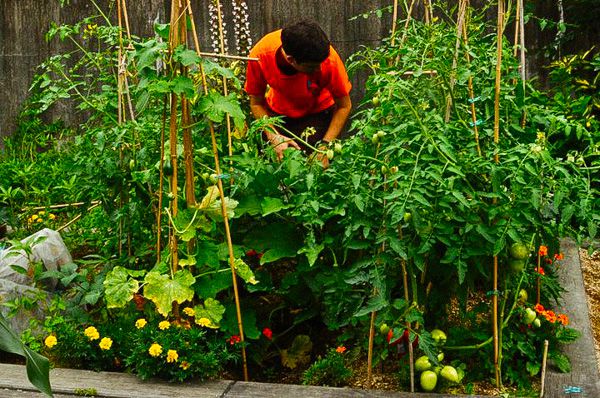 A second, related factor is our unquenchable desire for convenience. Most people simply don’t have time or inclination in their busy lives to go poking around the supermarket reading labels about what is organic, locally sourced, not to mention GM-free, before rushing home to cook for the life partner and/or the kids.

As the pendulum of modern capitalism swings further towards leveraging capital and away from protecting wage labour, we’re going to naturally have less time and mental energy to reflect on what we consume. And so we just don’t.

It’s even harder to be mindful of these things when many of us are on the road as our jobs increasingly require; unhealthy eating on the run from the convenience store or in the car. It’s a vicious cycle.

Nowadays the very foods that combined can help minimise the stresses entrenched by the system (herbs, roots, pulses, nuts, berries, etc.) can be prohibitively expensive for many. The entrenched distance between producer and consumer — that fosters the see, hear, do and eat no evil phenomenon — tells us much about our modern disconnection from nature, even if we can instantly share photos of our latest meal via social media to friends on the other side of the world.

In an alternative, perhaps utopian, universe where we could be connected to the keepers of our food culture (farmers, fishers, fermenters), surely we might be less likely to devour foods that are bad for our own health and that of the planet. 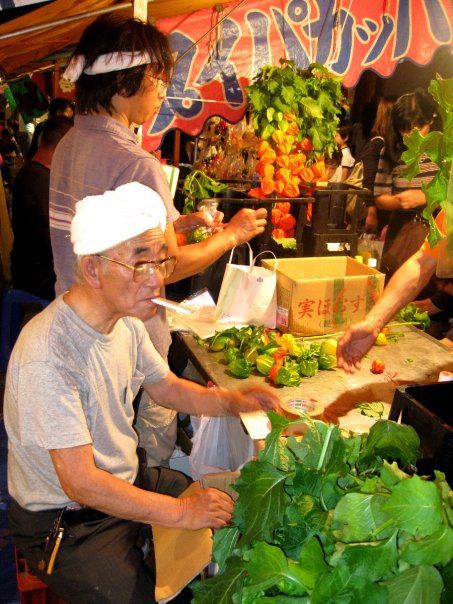 Recipe for a conflict-sensitive diet

When one teaches (and admittedly preaches) about these things, the response is often the quite reasonable question, what should we do? Here in the presence of provocative minds, I want to begin to explore the idea of a “conflict-sensitive diet”. Here are some guiding principles I’ve thought of on the run as an entrée to what I hope becomes a main course conversation.

1. Food Food — This might seem like a peculiar criterion but I put it here because most of what lines supermarket shelves has either been sugar-coated, frozen, deep fried, sauced or just plain adulterated to the point of being unrecognisable as food. Eating “close to the ground” — that is eating fresh fruits, vegetables, grains, and even meat in as close to a natural state as possible — is a sure-fire way of getting closer to inner and outer peace.

2. Local Food — It’s harder to ignore the destruction of pristine rainforest when it’s happening on your doorstep. The shorter value chains of increasingly popular farmers markets give people a chance to look into the eyes of those who grow their food.

3. Organic Food — This is not just a trend or buzzword but a value system that respects the parts of nature we cannot see below the surface (soil microbes, micro-organisms, the water table, etc.) but that are absolutely vital to sustainably growing our food.

4. Seasonal Food — One of the ultimate expressions of interconnectedness between humans and nature is how certain fruits and vegetables appear at the time of year when our bodies crave them most. Besides, have you ever tasted a delicious tomato in winter? 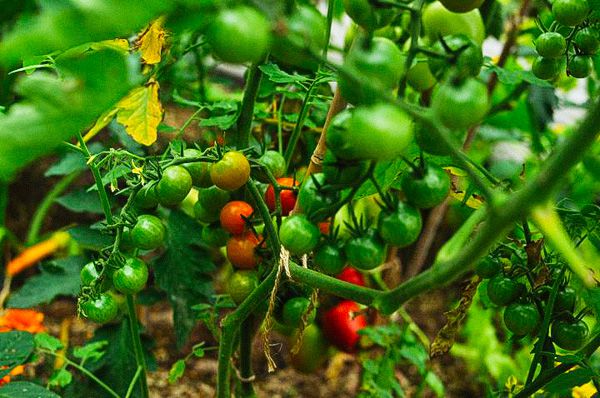 5. Fair Trade Food — The people who produce our food have the right to be paid fairly as much as you or I do. The fair trade system is complicated and imperfect but it’s the start of a process to ensure we pay the real price for our chocolate, coffee and beyond.

6. Social Food — Gardening, cooking and eating together can be powerful expressions of love for each other and nature. Studies have identified “social structure” as an important component for ensuring we live healthier, more peaceful lives.

Be absolutely aware that any recipe for a conflict-sensitive diet will require nuancing and that definite yes/no or can/can’t answers probably won’t lead people to make more conflict-sensitive food choices. It’s not a topic that can be covered in a single blog post or even a book since food cultures, production systems, trading regimes and local food safety concerns (e.g., Fukushima) vary around the world. Besides, we can’t realistically know everything about everything we put in our mouths. The key is to be more mindful where and when you can, and encourage others to do so by firstly doing it yourself.

The power of knowledge

I was recently fortunate to be a Fellow of Class XV of the Rotary Peace Center Professional Development Certificate at Chulalongkorn University in Bangkok. The course’s focus on topics like conflict management and capacity building for peace has joined some dots for me about the link between food and peace.

I already felt that peace and food are interconnected at the global, perhaps theoretical level. What I am appreciating more now is the need for conflict-sensitive decision-making at all stages of community development regardless of the field.

Moreover, many of the essential attributes of an effective peacebuilder — empathy, respect and importantly having “one foot in the lived reality and one foot in the realm of creative possibilities” — can be deployed within our organisations and personal lives.

If peace truly does come from within, as many of my Class XV colleagues so eloquently suggested, then surely what we put into our bodies has a bearing on how we achieve peace for ourselves, those who grow our food and the Earth we all depend upon.

So vote with your fork, and for peace, where and when you can.

Food for Thought… and Peace by Mark Notaras is licensed under a Creative Commons Attribution-NonCommercial-ShareAlike 3.0 Unported License.

Future of Food in Japan