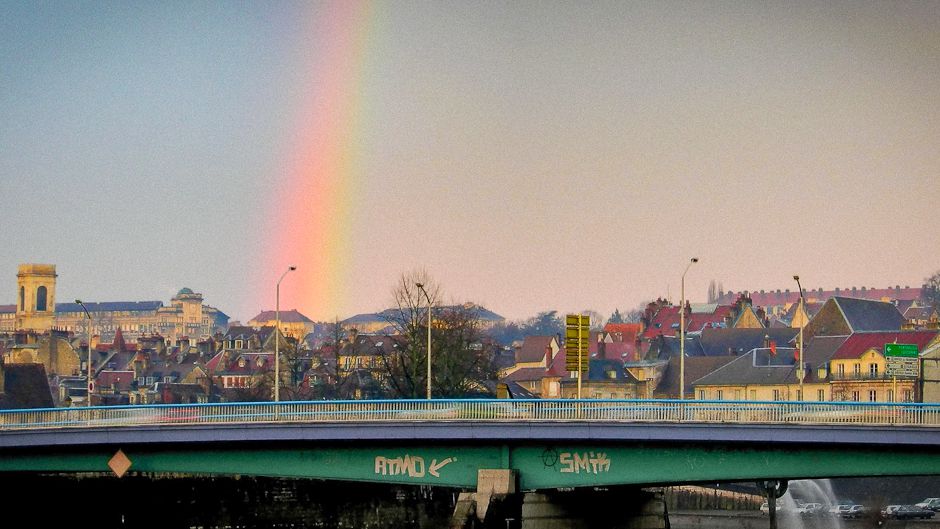 Christina E. is a mother of three who lives in an apartment building in an upscale neighbourhood in Paris. As someone who prepares meals daily, she wishes she had a place besides her household garbage bin where she could put biodegradable waste.

“I feel bad every time I have to throw out vegetable or fruit peels or other organic matter,” she told IPS. “I grew up seeing my family using a compost heap and if I knew of any collective bins in Paris, I would definitely use them.”

If Christina lived in Besançon, a picturesque town in eastern France, she would be able to put her biodegradable waste in a bin provided by the city, and she could even “recuperate” the compost to nurture the plants on her balcony. She could also get a chicken from the town to peck away at the waste.

Located 325 kilometres from the French capital, Besançon is known as the environmental and energy-saving “champion” of France. The area boasts a stunning hilltop citadel — a UNESCO World Heritage site, in fact. It also has the highest amount of social housing of French cities.

As such, it has made noteworthy efforts to involve residents in its environmental actions and plans to reduce energy consumption and carbon emissions by 20 percent by the year 2020, which is also a European Union goal.

“From the beginning, we’ve had a big awareness campaign so that people understand all the steps we’re taking. It’s a participative effort. The citizens are totally involved and understand the objective of cutting energy consumption by 20 percent,” said Nicolas Guillemet, vice president of the greater Besançon area in charge of sustainable development of the environment and quality of life.

In addition to providing compost bins to residential buildings and to private homes with space or a garden, the city also collects the compost and uses it to fertilise public parks and other green spaces. Enterprising residents can also accept a chicken from the town to help consume organic waste.

But this support is only a small part of the environmental efforts being taken by this population of 180,000. Since the town’s priority is to reduce energy as well as cut greenhouse gases, everyone has a role to play, said Guillemet.

Each year, the town “follows” a hundred or so families, studying their daily modes of transportation, their home-heating methods, and other habits. The research is aimed at showing individuals how they can change their actions to use less energy, Guillemet told IPS.

At the end of the study, the findings are released to the public so that others can make similar behavioural changes, he said.

Investing today for tomorrow and after tomorrow

If carrots fail to entice residents, there’s always the stick, where the town adopts tougher measures to motivate residents. Household waste, for instance, is taxed according to how much it weighs – the less waste one produces, the less one pays.

These measures have resulted in a 15 percent reduction of the waste collected for incineration, according to the office of Mayor Jean-Louis Fousseret, a Socialist.

Fousseret is one of the driving forces behind the many changes in the town, but his policies are not without controversy. He has been criticised by opposition politicians for overspending.

A new tramway in the town, scheduled for completion next year, for instance, cost 250 million euros and has caused residents much inconvenience over the past several months. And changing the public street lighting system to use LED bulbs costs 1 million euros a year, according to officials. The estimated savings, however, are 5 million euros annually.

“It’s easy to respond to critics who say we’re spending too much because, yes, it’s a lot of money invested initially,” Guillemet told IPS. “But afterwards, there is a great deal of savings realised. The tramway, for instance, costs millions to create, but it lasts 50 years or more. The same with energy savings.”

“Sustainable development is about long-term vision,” he added. “We’re investing today but it’s for tomorrow and after tomorrow.”

Besançon officials say they were inspired by Germany and Switzerland, which are “way ahead of France” in terms of sustainable energy policy. The town lies close to the borders with these countries, and strong ecology alliances have developed over the years. With German and Swiss help, Besançon has become an example to other French towns, officials say.

At the end of 2012, the city was awarded the “Gold Prize” of the Cit’ergie European Energy Award for “exemplary” achievements in climate and energy action, the first French town to be so honoured.

Despite Besançon’s progress, some experts fear that the town still faces an uphill battle to reduce energy consumption by 20 percent over the next seven years.

“It’s definitely achievable in the public sector, but things will be more difficult in the private sector where houses need to be renovated to be more energy efficient, for example,” he told IPS.

Cypriani said he hoped the tramway would have an effect on the two-percent increase in “déplacement” (transportation) that the town has witnessed, mostly involving cars. He hopes, too, that at the national level, the French government will take steps to reduce electricity use that will have an effect on Besançon.

France is Europe’s leading consumer of electricity for home heating, but Cypriani believes that wood should be promoted more, as it creates less pollution.

In Besançon’s manual of priorities, cutting energy consumption must be followed by producing energy on a local level.

“We want to be self-sufficient in the territory, and that means renewable energy,” Guillemet told IPS. The town is currently investing in photovoltaic panels and assisting residents who want to install photovoltaic or photo-thermal panels on their own property, he said.

Besançon officials have further identified a wind-energy zone and, in four years, an aeolian (wind) energy plan should be implemented. Water is also being explored as an energy source, as the town lies cradled in the loop of the Doubs River, and there are plans to continue using wood in two communal wood-burning heaters.

A D McKenzie reports regularly for the Inter Press Service agency, which includes 370 journalists in 330 locations in over 130 countries worldwide.