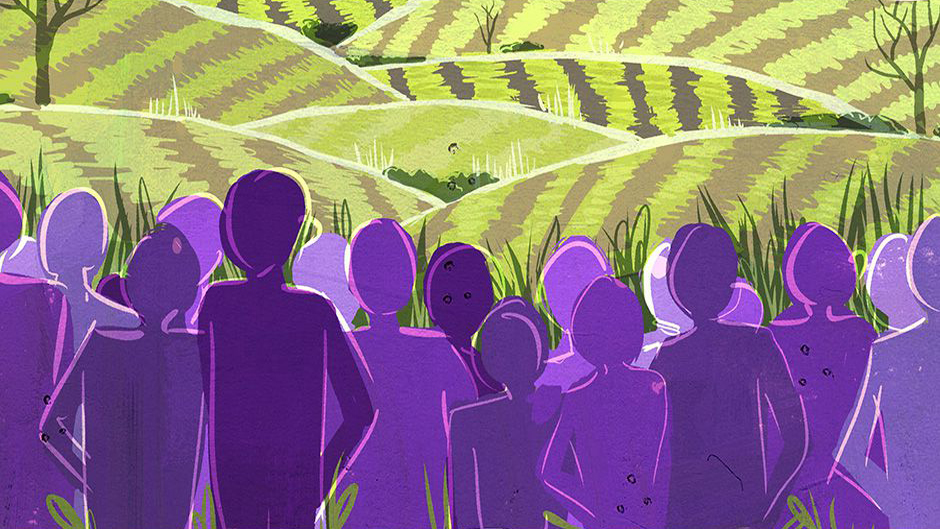 This article originally appeared in The Aspen Journal of Ideas and is reprinted here with permission courtesy of Ensia.

It is peculiar to live in a world where hunger is an endemic problem for half the planet while diet books are best sellers in the other half. This point is often lost in the broader bundle of jargon that now defines the conversation on food security in the 21st century, but it should not be.

A food security expert today will tell you that in order to feed the world’s population, projected to reach over 9 billion people by 2050, we must adopt a sophisticated strategy of “streamlining market efficiencies”, “scaling best practices” and “leveraging disruptive technologies” to put food in the mouths of the poor and the hungry. True. But there is more to this story.

In reality, food insecurity predates public-private partnerships and market-driven solutions by several millennia, and the essence of the issue remains unchanged. Even in the 21st century, chronic hunger and malnutrition are propagated by two forces: inequality and injustice.

This means that food security is as much a moral and political issue as it is one defined by markets and international agreements. Accordingly, we have an obligation to make the case for plugging the gaps in the global food system — not only because of how it will benefit economic growth and political stability but also because it is the right thing to do.

It is therefore time for a clear-eyed moral framework for reaching food security. This means building support among core participants — governments, the private sector, non-governmental organizations and international institutions — for the principle that feeding the world’s growing population is an end in itself and not merely a means to other ends.

Generating returns on investment, exploring new markets and protecting the world’s resources are important benefits that will come from working toward food security. But they are small part of a greater moral good that should remain the fundamental principle of food security. What does this principle look like in practice?

Government is first and foremost a social contract that outlines responsibilities for order and well-being between those who rule and those who are ruled. I therefore believe that governments have a responsibility to feed those who cannot feed themselves. But we must better understand what tools governments can use to achieve that objective.

First, property is everywhere in this discussion, and governments have the power to define the legal architecture of property rights. Food is about agriculture; agriculture is about land and water; and land and water are about property — who owns it, who has access to it, and who cultivates it. As the economist Hernando de Soto has pointed out brilliantly, if we can do a better job of making property rights accessible to all, we can also help the poor to use those rights to obtain credit, make investments and increase their agricultural output. Property rights give poor people a stronger voice and a greater stake in their economies. We cannot expect to increase the agricultural output of the world’s arable land if the smallholder farmers responsible for its cultivation are not invested in its future.

Second, as the providers of social services, governments are in a unique position to structure how issues such as nutrition, agriculture and infrastructure intersect with welfare and social services. One of the resounding lessons from the work of the Food Security Strategy Group at the Aspen Institute is that an integrated approach for reducing food insecurity has a greater impact than separate strategies for each sector. Ethiopia has demonstrated the wisdom of such an integrated strategy in its Agricultural Transformation Agency, a forward-thinking agency designed to reduce food insecurity by mandating collaboration between key government ministries and finance, agriculture, health, relief and social services. The success of this model is evident in the fact that since the strategy’s implementation, Ethiopia has made greater gains toward food security (as measured by the Economist Intelligence Unit’s Global Food Security Index, which is sponsored by DuPont) than any other country.

Third, governments have the power and responsibility to create clear regulatory environments to accelerate technologies that support the safe and sustainable increase of agricultural production. One important opportunity will come later this year, when the United Nations sets out its post-2015 development goals. Part of the discussion about the proper role of the U.N. in food security should include whether we consider access to food a human right. Importantly, this could help reframe the debate on hot-button moral issues such as agricultural subsidies and genetically modified seed.

As the guardians of social order and justice, governments have a compelling moral responsibility to lead the way toward a more food-secure future.

The Green Revolution and its modern-day counterparts have saved countless lives. Yet there are countries with starving populations that for a variety of reasons have decided they will not use any crops that have been exposed to GMOs or are themselves genetically modified. Consensus in the scientific community supports the position that GM crops increase yields and do not pose a threat to human health. While this position could shift, until that happens we have a moral imperative to use these agricultural innovations to decrease hunger and increase profits for farmers in the developing world. Only governments have the authority to drive evidence-based policy reforms that decrease hunger, enhance nutrition and support innovation.

From the legal architecture of land and water rights to the provision of social services and the power to shape and accelerate high-impact technologies, governments possess considerable tools to deploy in the global effort to fight food insecurity. Moreover, as the guardians of social order and justice, governments have a compelling moral responsibility to lead the way toward a more food-secure future.

But government can’t do this alone. Governments are not omnipotent, nor do they possess infinite resources. The two sectors best positioned to complement the tools and capabilities of governments are the private sector and what we may consider the “spiritual” sector or global religions.

Businesses, of course, have the greatest stake in achieving a food-secure future. And it is here where the moral underpinning of food security becomes particularly important. Businesses, including large multinational agriculture companies, stand to gain a great deal in the markets that now exemplify the most endemic and vexing challenges of food insecurity. Yet the path to profitability in those regions is not always confluent with the long-term sustainability and welfare of the most vulnerable communities.

These are the voices of religious authority — from the pope to imams, and everyone in between — who have the power to spur broad-based action on agriculture and nutrition to help the poor and malnourished.

Businesses have a responsibility to share the burden: to do well by doing good. In the agriculture sector, this means making a commitment to developing resources and human capital at a community level so that smallholder farmers, who are mostly women, share the profits of the global rise in agriculture yields by having fair access to water, land and fertilizers.

Even with the public, private and nonprofit sectors fully engaged, it’s in our interests to recognize that another set of voices can mobilize grassroots action on an issue such as food security in a way no other organizations can. These are the voices of religious authority — from the pope to imams, and everyone in between — who have the power to spur broad-based action on agriculture and nutrition to help the poor and malnourished.

Notably, Pope Francis and his deputy, Cardinal Peter Turkson, have been outspoken on this issue, with Pope Francis going so far as to call it a “God-given right of everyone to have access to adequate food.” Moreover, they have mobilized the [Catholic] Church’s development arm, Caritas Internationalis, in a global campaign to end hunger by 2025 by leveraging, for the first time, the worldwide footprint of Caritas Internationalis and its affiliated organizations to present a unified call for systemic change in the global food system.

The pope’s voice and action on this issue, as evidenced by his strong endorsement of the Rome Declaration on Nutrition andFramework for Action, exemplifies how religious leaders can use their gravitas and authority to galvanize support for public sector–led initiatives.

Meeting the complex challenge of achieving food security by mid-century mandates new thinking and action. Yes, it requires “dynamic partnerships”, “models for scalable impact” and “disruptive technologies”, along with a host of other ingredients that would be dizzying to list. But the real challenge is to use the core competencies of each sector to pursue a common goal. Businesses make money — they must find it in their interests to grow in a way that leaves the poor and malnourished better off in the areas in which they work. Governments make laws and uphold order — they must see protecting the poor and malnourished as fundamental to social and political stability over the long term. Religions and other NGOs — such as those focused on empowering women — can share compelling narratives and motivate people to give back, cut back and reduce food waste. In a world where one-third of all edible food never makes it to the mouths of the hungry, we all have an individual moral responsibility to do our part.

The imperative to support those in need is the idea — the larger framework — that unites each of these sectors in achieving food security. We should embrace this sense of shared purpose.

Global Food Security Is a Moral Imperative by Madeleine Albright is licensed under a Creative Commons Attribution-NoDerivatives 4.0 International License.