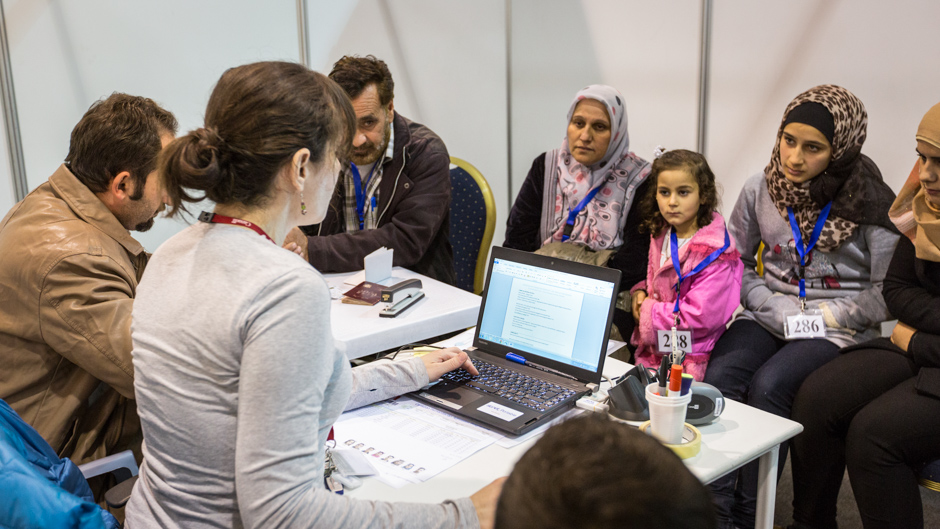 In recent years, the world has seen a rise in the number of people displaced due to violence, conflict, environmental degradation, and economic hardship. These demographic shifts have re-focused interest and debate on the large-scale movement of refugees and migrants. This is the second instalment in a series of information briefs that aim to provide an overview of recent developments in the area of international migration.

The 19 September 2016 United Nations Summit for Refugees and Migrants will be the first time the UN General Assembly (UNGA) hosts a high-level summit to address large movements of refugees and migrants. Across the world, these movements have starkly increased over the past few years.

Recent developments point to a growing willingness by UN Member States to pursue a more integrated global approach to migration and the refugee crisis. In addition to the summit on 19 September, more cohesive models of global migration governance have been developed. These models notably take the form of the Global Migration Group (GMG), an interagency group bringing together experts to promote the application of international instruments and encourage coordinated approaches to international migration, and the Global Forum for Migration and Development (GFMD), a forum for UN Member States and observers to enhance cooperation on migration and development issues. In addition, certain global development initiatives increasingly reference migration in their development agendas. For example, the 2030 Agenda for Sustainable Development underscores that migration is an important component of sustainable development — a facet missing from the former Millennium Development Goals framework.

Similarly, the 2015 Group of Twenty (G20) conference recognised — albeit in an open-ended fashion — that the “scale of the ongoing refugee crisis is a global concern with major humanitarian, political, social and economic consequences”, and that there is a need for a coordinated and comprehensive response to the crisis. Efforts are likely to be further enhanced with the International Organization for Migration (IOM) set to officially become a related organisation of the UN, allowing for deeper cooperation between the Office of the United Nations High Commissioner for Refugees (UNHCR) and IOM as they fulfil their respective mandates.

Recognising the growing need for coordinated and unified action to address large movements of migrants and refugees, the UN Secretary-General held a series of formal and informal meetings in September and October 2015 that sought to strengthen global cooperation on these issues. These meetings subsequently led to the UNGA agreeing in December to hold the 19 September summit on migration and refugees.

As part of the process, UN Secretary-General Ban Ki-moon appointed Special Adviser Karen AbuZayd to work with relevant entities to undertake preparations for the summit, including oversight for the drafting of a report on large movements of refugees and migrants. The report, issued on 9 May 2016, underscored concerns regarding the growing trend of xenophobia in many host countries as well as the disjointed and one-sided migration policies of most states. The report encouraged states to negotiate and pass two global compacts that would address the governance challenges of large movements of refugees on the one hand, and of migrants on the other.

Negotiations for the summit’s outcome document were undertaken in August. The current draft of the New York Declaration on Migrants and Refugees outlines a broad framework on the rights of refugees, asylum seekers, and migrants, in addition to setting a timeline for passing the two global compacts. While international organisations, such as UNCHR and IOM, and most governments have applauded the draft declaration, the response from non-governmental organisations (NGOs) has been more tepid, with many arguing that the draft merely reiterates existing principles enshrined under international law.

Nevertheless, the declaration creates an opportunity for the UN and relevant entities to create a unified global response on large movements of migrants and refugees. As others have noted, some of the explicit (and often implicit) divisions of labour between international organisations and intergovernmental bodies have come at the expense of more cohesive global responses to these challenges.

While most European states ostensibly support the upcoming UN summit, shifts in domestic and regional politics suggest that political sentiments on the refugee crisis and migratory issues are becoming increasingly fragmented. On 5 September 2016, for instance, Angela Merkel’s Christian Democratic Union (CDU) was beaten into third place by anti-immigrant and anti-Islam party Alternative für Deutschland (AfD) in an election in a north-eastern German state. Commentators noted that CDU’s loss was largely a response to Merkel’s “open door” refugee policy (which accepted 1.1 million refugees last year), with the AfD becoming the party of choice for voters dismayed by the chancellor’s policy.

Policy fragmentation is also occurring within the European Union (EU) as a whole, with the latter struggling to come up with a sustainable response to the flow of migrants and refugees, and with EU Member States resisting calls to host and resettle refugees. In May 2106, the EU made a significant push to reform the Dublin system, which determines asylum procedures in the EU. The Dublin system initially drew the ire of international organisations, including UNHCR and the European Council on Refugees and Exiles, who expressed concerns that it negatively impacted the legal rights and personal welfare of asylum seekers, highlighting that the current system placed asylum seekers at risk of refoulement (the forcible return of refugees or asylum seekers to a country where they may be subjected to persecution); increased the likelihood of detention; and resulted in a lack of information-sharing between governments, and between states and asylum seekers.

Despite these concerns, some EU Member States have actively been fighting attempts to reform the current regime. The Czech Republic, Hungary, and Slovakia have vocally opposed EU-mandated quotas, arguing that these deprive them of their sovereignty and encourage more refugees to come. In Hungary, Prime Minister Orban’s government has launched an anti-migrant campaign ahead of a referendum on migrant quotas. Polls indicate that Hungarians are likely to overwhelmingly vote “No” to the question: “Do you want to allow the European Union to mandate the resettlement of non-Hungarian citizens to Hungary without the approval of the National Assembly?”

Strains are also evident in the rocky relationship between the EU and Turkey, with Turkish President Erdogan recently accusing the EU of failing to deliver a pledged 6 billion euros in support of some 3 million refugees living in Turkey.

The G20 response to the migration and refugee crisis was mild earlier this week. While the G20 recognised that “well-managed migration” can bring positive benefits to economies and societies, it pushed discussion on the topic to 2017. Recommendations for the refugee crisis were more substantive, with the G20 urging states to scale up humanitarian assistance, in particular for protracted refugee situations, and reiterating a call for global partners to “share in the burden associated with it”.

However, some NGOs quickly lambasted the G20’s response. Amnesty International characterised the call as “hypocritical” and Oxfam considered the G20’s commitment to start developing a response in 2017 to be “too little, too late”.

North American response to the refugee crisis has become more open and unified. The United States recently welcomed its 10,000th Syrian refugee resettled, fulfilling a promise it made last year despite diverging pledges by the Democratic and Republican presidential candidates on policies regarding migrants and refugees. Canada has been continuously praised for its resettlement efforts, taking in 25,000 Syrian refugees since 2015.

Although NGO enthusiasm for the UN summit remains relatively low, many have commended the initiative by the US president and his co-hosts to host the Leaders’ Summit on the Global Refugee Crisis on the margins of the 71st United Nations General Assembly. InterAction, a group of 43 non-governmental organisations, applauded the initiative. InterAction noted that although the summit focused only on refugees, the framework set for it — expanded humanitarian funding, expanded resettlement, and renewed efforts to increase refugee inclusion and self-reliance — would result in a substantial contribution to managing the refugee crisis.

Other groups, such as the Business & Human Rights Resource Centre, have called on the private sector to play a more active role in generating security and realising basic rights for migrants and refugees.

Global Responses to Refugees and Migrants in a Fragmented World by Bavo Stevens is licensed under a Creative Commons Attribution-NonCommercial-ShareAlike 4.0 International License.