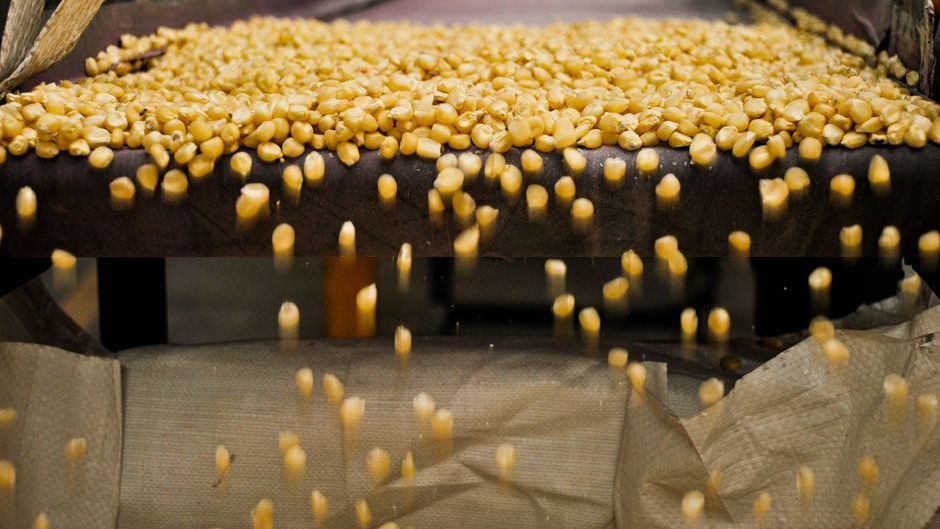 Calls to boost agricultural production in order to meet the demands of a growing global population are now commonplace. Yet, depending on where productivity changes and population growth occur, international trade could be increasingly necessary to get food from farms to consumers.

In a new study, published in Environmental Research Letters, authors Marianela Fader et al offer a nuanced view of this spatial disconnect and its food security implications by considering a valuable thought experiment: what countries could have/can foreseeably meet their food requirements from internal production alone circa 2000 and for contrasting scenarios in 2050?

They investigate the extent to which available renewable water and land resources constrain domestic per capita crop production, assuming current as well as broadly improved yields. The findings convey an intuitive, though often overlooked, point that population growth is likely to increase the reliance of certain regions on food imports unless substantial productivity improvements are realized.

It is unlikely that any nation would be compelled to produce all of its food domestically, but reflecting on potential food self-sufficiency is a worthwhile endeavour.

Importing crops may be matter of choice, but also one of necessity if available land, water and yields limit production. Dependence on food imports can involve uncertainty: production shortfalls arising from drought and other factors have been associated with price volatility — or even restrictions on crop exports — posing challenges to countries anticipating consistent import arrangements.

[quote quote=”Just eight countries comprising 11 percent of the global population produced 70 percent of cereal exports during the past decade.” type=”text” ]

Compounding this uncertainty is that a relatively small number of countries produce the bulk of staple crops for global markets. Just eight countries comprising 11 percent of the global population produced, on average, 70 percent of cereal exports during the past decade, according to 2013 data from the Food and Agriculture Organization of the United Nations. Although trade networks are dynamic, some net-importing countries have developed entrenched relationships with particular producers that entail very large crop transfers.

A central finding of Fader et al’s study is that domestic crop production could theoretically replace imports and allow food self-sufficiency in many countries. Embracing this potential could lessen the need to increase imports as populations grow.

Yet, in their extreme scenario — assuming no yield improvements, no agricultural expansion and high population growth rates — roughly 51 percent of the global population would be import dependent by 2050.

While improbable, this case raises the question of how such a spike in crop demands might ricochet across producing countries. Exporters could alter their production and export rates in response to various internal or external drivers, such as land-use policies, concerns over grain stocks, or climate change impacts.

Another recent study by Samir Suweis and colleagues suggests that water-rich nations are unlikely to maintain their current crop export rates amidst global change, questioning the persistence of global food trade relationships in the absence of mitigative actions.

The uneven role of a relatively small number of nations to the food security of many is apparent when considering the origins of key crops imported by countries that Fader et al estimate have already crossed a resource boundary limiting food self-sufficiency (see figure). 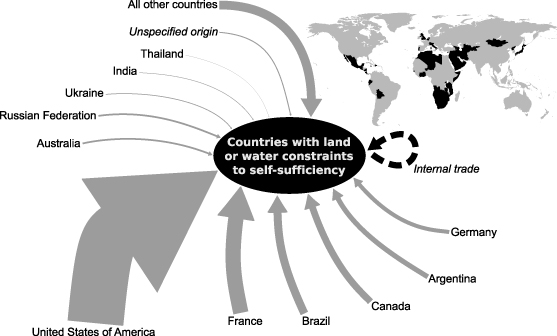 The map of countries exceeding at least one boundary circa 2000, shaded in black, is based on figure 1(B) in Fader et al. The size of the lines indicate the relative quantity of kilocalories imported, calculated using FAO (2013) import matrices and crop kilocalorie contents (FAO 2001) averaged for the period 2000–2010. Internal trade among countries that had exceeded a land or water boundary totalled ~6 percent. Small island nations and 11 countries not reporting import origin data were omitted here.

Such trends would exacerbate direct or indirect reliance on foreign land and water resources. Comparison of global crop productivity simulations with regional crop response models would help to better understand how management interventions and changing climate positively or negatively impact attainable per capita production across regions.

Moreover, the cropland expansion scenarios used in Fader et al ‘s study are optimistic in that they draw on a sizable land base of 13.2 million km2, which, if fully utilized, would be an almost doubling of the 15.1 million km2 under production in 2000 (FAO 2013).

We already use much of the world’s prime arable lands, with stagnating yield trends for key crops in some locations, so realizing equivalent yields from a vast new area is unlikely, according to research from the past few years. Considering how specific farm management and demand-driven feedbacks alter trade patterns would provide valuable juxtaposition to Fader et al ‘s benchmark study.

Ultimately, equity and cooperation among countries may be increasingly critical to regional food security if locations of food production and consumption continue to diverge. Even with large increases in yields and widespread cropland expansion, Fader et al project that up to 30 countries — largely low-income economies — will remain import dependent due to resource constraints.

Food security in poorer countries that are most vulnerable to productivity shocks and price volatility depends on the ability of certain populations to afford imports. Future changes in agricultural commodity prices tied to yield variations could disproportionately impact the welfare of specific households, while possibly benefiting other lower income countries that produce exports.

[quote quote=”Equity and cooperation among countries may be increasingly critical to regional food security if locations of food production and consumption continue to diverge.” type=”text” ]

In the event that import dependence rises markedly from 16 percent of the global population circa 2000, cooperative trade policies may be pivotal to alleviating food insecurity of the most vulnerable net-food importing countries.

Quantifying the capacity of countries to meet their per capita crop requirements underscores the importance of truly widespread yield improvements, particularly given the already concentrated nature of export production.

Fader et al’s study offers new insight on how the growing spatial disconnect between where people live and where food is grown may dictate either increasingly entrenched dependence on foreign production or immense cropland expansion throughout net-importing countries. Framing this challenge in terms of potential domestic crop production reveals that even small yield improvements could go a long way toward easing both.

This post is an adapted version of an Environmental Research Letters Perspective under the terms of the license Creative Commons Attribution 3.0. Please see the original for full references.

Graham K. MacDonald is Postdoctoral Research Scholar with the Global Landscapes Initiative at the Institute on the Environment, University of Minnesota.