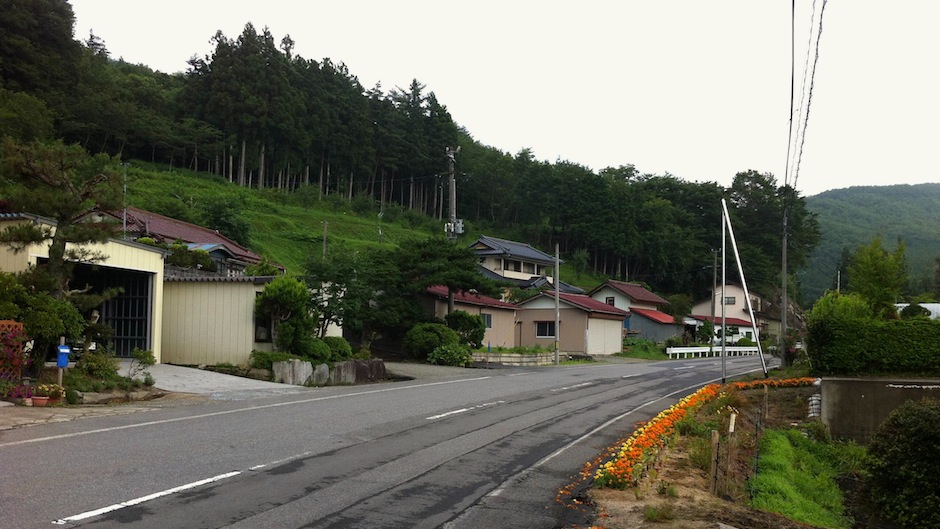 Spread along a narrow meandering highway in Fukushima Prefecture known as National Road 288, Miyakoji village has a population of 3,128. The main part of town concentrates a post office, a fire department, a library, a kindergarten, three elementary schools, a junior high school, a supermarket, a health center, a clinic, various shops, and even a taxi company.

Less than five kilometers to the east however, Miyakoji gradually fades into a handful of red roofed houses that spread across the green fields. Other than a liquor store and a soda vending machine, people passing by will find almost no services here. The air feels clean and pleasant. To the west, rice paddies dominate the views and the lush trees are reminiscent of a once active forestry industry.

The product of merging smaller villages, Miyakoji came into modernity in1889, and for more than a hundred years it led an uneventful life. Its first important administrative change came in 2005, when the prefectural authorities decided to merge Miyakoji with the neighboring towns of Funehiki, Ogoe, Takine and Tokina forming a larger entity that was named Tamura. When looked at on a map, Tamura City exhibits a somewhat irregular shape that resembles a sea bream, one of the types of fish that is caught off the coast of Fukushima.

But sea breams — like Fukushima, Tamura, and Miyakoji — face an uncertain future: their ecosystems have become heavily contaminated after Japan’s most serious nuclear disaster. This environmental contamination deeply affects human life. Whether things will ever go back to normal in this region — and whether going back would be advisable at all — is a matter of debate and much uncertainty.

Following the 11 March 2011 nuclear catastrophe, massive amounts of radioactive materials such as Iodine 131, Cesium 134, Cesium 137, and Strontium 90 were released into the atmosphere. Nuclear reactor meltdowns forced the Japanese government to issue evacuation orders for all residents living within a 20 km radius of the Fukushima Daiichi power plant and Miyakoji fell into that radius. Local residents were told to evacuate but not why; they did not know where to go, or how long they would be away from their homes. Because a proper evacuation plan and contingency measures were not in place, thousands were affected by the nuclear fallout.

This generated the concern of many people across Fukushima, especially among mothers of young children as a child’s thyroid gland is much more susceptible than an adult’s to developing cancer as a result of radiation exposure. Medical authorities told the public there would be no immediate health effects of exposure to radiation, and specialized doctors repeatedly claimed it is safe to be exposed up to 100 millisieverts per year. However, such claims were disputed by other scientists in Japan and the rest of the world.

Radiological jargon aside, what became clear for mothers is that doctors have no way of demonstrating that the radiation will have no pernicious effects on their children’s health. The official over-reassurance about there being no problems with radiation angered Fukushima residents. They felt it was irresponsible of the authorities to say so and it created a deep mistrust that is still ongoing.

The Japanese government tried to convince its people that things were under control at the Fukushima plant and that radiation levels posed no health threats. But this attitude backfired: poor risk communication greatly amplified uncertainty. Rather than finding reassurance, nuclear evacuees felt they had been deceived by the government and the nuclear industry.

In the inevitable confusion of a disaster scenario, the contradictions in the discourse of the medical community did not help. For instance, people would be informed one thing regarding the acceptable levels of radiation only to be told another shockingly different story just days after. As a result, trust in the authorities was badly damaged, and profound disbelief of health policies permeates public perceptions to this day. 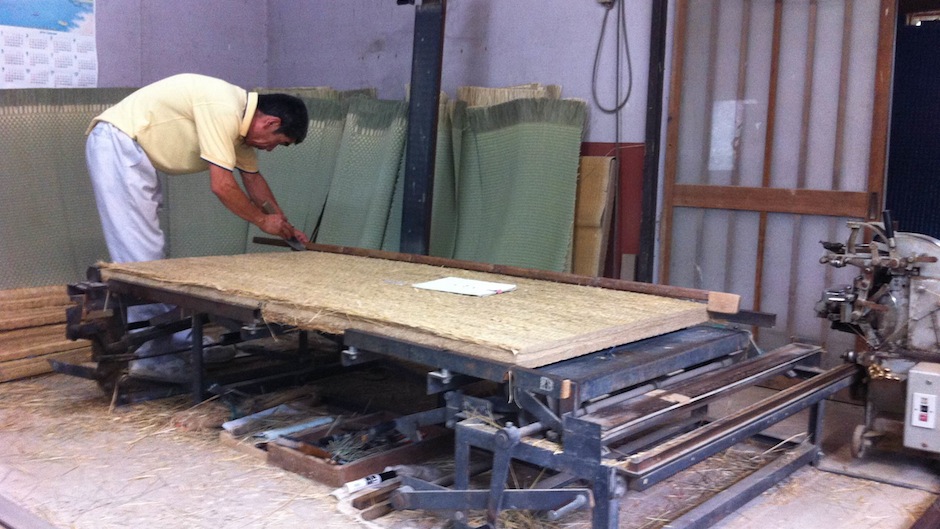 Kyoichi Konnai, who runs a tatami shop in a now half-empty section of Miyakoji, believes the levels of radiation will not affect him too much given his age (55) but he worries about his grandchildren. Photo: Pablo Figueroa.

“We can’t trust the government,” says 55-year-old Kyoichi Konnai, who runs a tatami shop in a now half-empty section of Miyakoji. “Radiation here has lowered just slightly after decontamination, which was done in a reckless manner,” he tells me.

Konnai has first-hand knowledge of decontamination policies. He used to be a clean-up worker at stricken Fukushima plant. Although he believes the levels of radiation in Miyakoji will not affect him too much given his age, he worries about his grandchildren.

“The government says there will be no immediate health effects but future generations may suffer from cancer, reproductive impediments, and so on.”

Many other families share this concern. When I visited Miyakoji in September 2014 the government had lifted evacuation orders for this area and reclassified it as safe. However, less than 30% of the village, mostly elders, had decided to resettle there.

Among the issues surrounding health governance in Fukushima are transparency, openness of information, and scientific objectivity. To trace health effects of radiation among children, the government launched the Fukushima Prefectural People’s Health Management Survey. But critics have pointed out that the objectives of the survey may be biased: in their view, the study is intended to ease the anxiety of the population and to convince skeptical people that the health impact of the accident will be negligible.

In a study titled “Thyroid Cancer in Fukushima: Science Subverted in the Service of the State”, the authors argue that “researchers believe that the study will not detect physical effects of the accident; rather, the survey is being conducted to calm the anxiety of the population”. Indeed, this would be a controversial starting point for a scientific study. If the frame of the study is not designed to detect effects that would confirm or reject a hypothesis, the results can create even more mistrust among people.

One thing that worries parents is the results of the thyroid screening test. Many of them have complained that the structure of the survey is potentially dismissive of the health problems. The survey results are presented in the following way: children without symptoms are A1. Those having nodules of a size under 5 mm and cysts under 20 mm are A2 and considered “normal”; they do not undergo immediate further testing. Children with nodules over 5.1 mm and cysts over 20.1 mm are B, and the ones given a C are advised to take the confirmatory examination immediately.

The problem is that parents receive no detailed explanation about what all of the above means and this is extremely worrisome for them. What is more is that, until recently, they could not obtain the original echography of the thyroid screening, just a copy in very bad quality. Neither could they get the complete set of results in their file: to do so, they had to go through a cumbersome administrative process. Apparently this has started to change but according to non-profit organization Iwaki Radiation Measuring Centre, most parents may not be aware of this yet. Lack of transparency in the survey has been denounced by the organization Human Rights Watch as anticonstitutional. Articles 13 and 21 of the Constitution of Japan state that patients have a right to receive the full results of a health examination.

Data presented in a report on the results of the screening for thyroid cancer released on 24 August 2014 indicates that those with a result of A1 or A2 were 99.2% of the population. It is to be noted, however, that 47.7% are A2, meaning almost half of the screened children presented nodules under 5 mm and cysts under 20 mm in their thyroid gland. How to interpret this data is a contentious matter.

The need for responsible risk communication

Addressing issues of health governance in Fukushima means acknowledging the reasons for people’s fears of radiation. People’s perceptions do matter and should not be dismissed as purely irrational. What communicators of risk in Japan need to learn is that the public wants to be informed responsibly; that is to say, citizens don’t appreciate false reassurances or half-truths. Whatever level of certainty the government had about the acceptable levels of radiation, that’s exactly what they should have told the public. Rebuilding trust between doctors and patients implies taking people’s fears into account, giving them appropriate explanations, taking the time to clear out mothers’ doubts, and making medical information transparent and accessible. 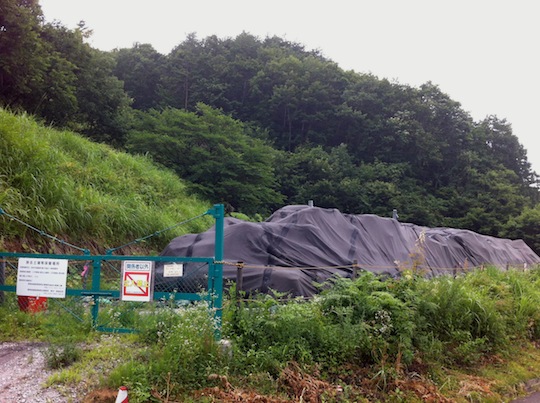 The countryside along the Miyakoji highway looks pure but not far from here large amounts of radioactive soil removed from the nearby areas during the decontamination efforts are wrapped into huge plastic bags piled up in temporary nuclear dumpsites. Photo: Pablo Figueroa.

Most crucial is that the nuclear industry, the government and the medical community establish fluent channels of cooperation to engage in ethical and responsible risk communication with the public, which is a two-way activity rather than a one-way, source-to-target instruction. There needs to be a change both in the mindset of the authorities and people, if they are to rebuild broken trust.

A difficult road ahead

Seen without the filter of the nuclear disaster, the countryside along the Miyakoji highway looks pure, natural. These romantic panoramas however, conceal a disturbing reality: not far from here large amounts of radioactive soil — land that has been removed from the nearby areas during the decontamination efforts — are wrapped into huge plastic bags piled up in temporary nuclear dumpsites, out of the public view.

The government wants people to come back to Miyakoji, but for the former inhabitants it’s a difficult decision to make. As for early December 2014, only 133 individuals composing 53 households had returned to town — just 39.1% of the total number of registered residents. Radiation and uncertainty about the future and a disintegrating social fabric make it hard for people to resume their lives. Some of them, especially the elders, want to move on by living again on land to which they feel very much attached. But the ghost of radioactivity is not easily cleared out and may linger for a long time to come.

Pablo Figueroa is an Assistant Professor at the Center for International Education at Waseda University, in Tokyo, Japan. He is interested in contemporary issues of Japanese society and culture, including governance, natural and man-made disasters, and risk. Pablo’s research currently focuses on risk communication and health governance of the Fukushima nuclear accident.