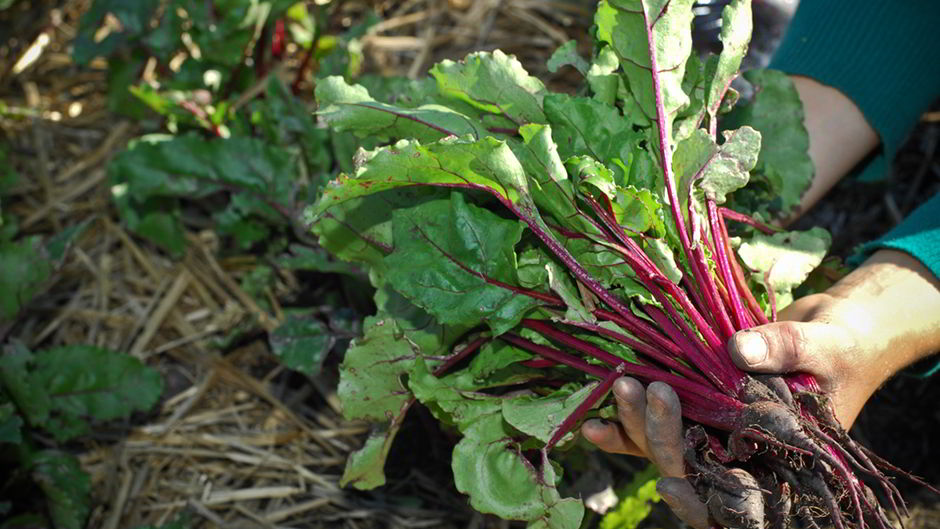 Quite an old concept, and one ascribed to by such notable persons as Mahatma Gandhi and naturalist Henri David Thoreaux, “voluntary simplicity” is making a comeback in the Global North.

With climate change and oil depletion issues looming large and recession hitting hard, more people are realising that our way of life is unnecessarily resource-intensive.

Of particular concern to such “slow livers” or “downshifters” in rich industrialised countries is their reliance on a food system that is dependent on massive fossil fuel inputs. (Not to mention the health impacts of a diet based on chemical-drenched produce, processed foods and hormone-filled animal products).

Truly tackling the problem would, according to the Post Carbon Institute, require a “systematic reinvention of the [US] food production and delivery system” at a broad level, and perhaps the hot new documentary Food Inc. will have viewers agreeing.

Meanwhile, individuals are showing a growing personal interest in the origin and impact of their own food. Thanks to this new breed of “locavores”, the North American local food movement has become surprisingly vibrant and farmers markets are enjoying new-found popularity. The trend has also hit Japan (though this is partly due to food safety concerns after several labelling and tainted food scandals) where it is not uncommon to see a farmer’s photo on the label of fresh supermarket vegetables.

While communal and home gardens still make up only a fraction of the developed world’s food supply, their popularity is also expanding, as witnessed by the astounding number of bloggers chronicling their backyard efforts towards edibles independence.

Examples of low impact food trends include everything from balcony gardening, the Obamas-inspired rebirth of “victory gardens“, to homesteading, guerrilla gardening and freeganism. Here is an introduction to some interesting movements and inspiring people.

In developing and emerging market countries, urban gardens are more an issue of food security and food justice rather than carbon footprints. However, since cities cover only 2% of the Earth’s surface while consuming 75% of its resources, in the global drive to lower emissions, the spread of urban agriculture to the industrialised world is essential.

City dwellers find that communal gardens not only supplement their diet but create social ties with neighbours too.

These days, garden plots are hot. In Berlin, there are 80,000 urban farmers and in the UK there are wait lists for space in allotments. In the struggling ex-automotive centre of the US, a “Grown in Detroit” cooperative of urban farmers are not only feeding themselves, but selling surplus produce as well.

“This need not be a marginal activity in a place like Detroit,” said Michael Hamm, professor of sustainable agriculture at Michigan State University. “The possibilities for economic development become real.”

A recent study by one of his students found that the city has enough suitable vacant land to grow 76% of the vegetables and 42% of the fruits Detroiters need for a healthy diet.

City dwellers find that communal gardens not only supplement their diet but create social ties with neighbours too. As one resident told a Madrid newspaper: “Now we have something to talk about in the elevator.”

Amber Westfall agrees there are added benefits. An office manager at a holistic health care clinic and budding yoga instructor, she took the plunge into growing food in the spring and now spends about 6-10 hours a week at a municipal allotment in Ottawa, Canada.

“I think of the plot as my back yard,” she told us in an e-mail interview last week. ” I don’t go there just to garden.  I like hanging out there, reading, doing yoga, inviting friends for picnics.”

The 33-year-old lives in an apartment that is a 15-minute cycle away from her 93 square meter plot at what she describes as “an incredibly diverse place, very multicultural. Lots of new Canadians, a wide range of young and old — the Hope Garden.”

Amber has been chronicling her gardening learning curve, as well as her weekly harvests, on her blog Unstuffed,  which is an interesting look at efforts to live ever more simply and resiliently. Her interest in low impact food began when she embarked on a “Buy Nothing New” year in 2008, during which she reduced her consumption as much as possible.

“Since food was one of the few things I obviously continued to buy new, I thought about food a lot,” she said.  “I thought about the origin of food, how it is grown, what’s in it, who or what grows it, in what conditions, how it is shipped.”

She turned to food issues authors like Michael Pollan, Vandana Shiva and Wendell Berry and the web (eg., The Ethicurean) to educate herself. Some of whom wrote “so eloquently about the joys of eating locally and seasonally, and growing and preserving their own food” that they invoked nostalgia and Amber found herself turning to her grandmother.

“Memories came back from when I was young, of my grandmother’s lush gardens, the jams and pickles she made, the cool stone crocks of things fermenting in the basement,” she explained.  “I had long conversations with her about how she did all those things, rediscovered a bit of my heritage, and picked up some sage wisdom about the way things were done back in the day.”

Walk on the wild side

The historical record has only a handful of examples of long-term sustainable societies, all of which were based on agriculture and hunting and gathering. And since there is not yet proof of a sustainable industrial society, it is safe to assume that some knowledge of old fashioned ways may be important. For example, skills in the gathering category come in handy when you are hungry, broke or want to lighten your foodprint even further.

Amber, for one, developed an appetite for foraged plants at a wild edibles workshop last summer. This spring she took a 6-week course that taught her to recognize and harvest wild vegetables, fruits, and teas where they grow — a practice called wildcrafting. Botanist Martha Webber took Amber and fellow students trekking through local woods and fields, collecting free food they had never before noticed.

“Each night we finished with a wild feast, the menu depending on what we foraged earlier”.

“She taught us how to identify fiddle heads, garlic mustard, linden leaf, ramps, morels and more,” Amber said. “Each night we finished with a wild feast, the menu depending on what we foraged earlier.”

While continuing to enjoy wildcrafted dishes like steamed nettles and dandelion fritters and study up on “wild ethics“, Amber has now branched out. She is doing a year-long herbalism apprenticeship, learning which plants have medicinal value and how to prepare them.

Every year, Japan throws a staggering 19 million tonnes of food into the garbage — more than three times the world’s total food aid.

“There is a lot of waste in Japan, not just food,” says artist and blogger Ojisanjake (which is Japanese for Uncle Jake), who is a freegan. “I’ve found that people are only too happy if you help them by taking something they would otherwise throw away.”

Originally from the UK, 55-year-old Jake has been in Japan for eight years after living in several countries, including five years spent with indigenous people where he says he learned a lot. A freegan “since I was a young hippie in the sixties”, Jake does not rescue food (or dumpster-dive) like some freegans but says he grows a lot of his food, gets some from neighbours and occasionally buys some from locals.

“For a living, I live!” Jake replied when asked about his day job. “I find it impossible to separate out different compartments for my life… everything I do includes labour, leisure, education, entertainment, spirit, art, etc. I grow food, chop firewood, renovate my home, make masks, paint, write, sell a little local products, do a little tour guiding, teach a little English.”

“I think freegan is just a new word for how we humans have lived for most of our history, i.e., cash poor,” he said.

Greening brains and skilling up

Becoming informed is the first step in comprehending the problems with industrial food production. Author Michael Pollan’s book In Defense of Food reveals just how programmed we are in industrialised society when it comes to food.

“That anyone should need to write a book advising people to eat food could be taken as measure of our alienation and confusion,” he writes. The book examines how — instead of eating just the whole foods that our bodies needs — our diet has been co-opted by science and corporations that are unnecessarily processing our food, creating myriad health issues and wasting energy.

However, knowledge is one thing and hands-on action is something else. One can start easily by cutting down on food mileage (counters are available online), finding local organic producers or farmers markets, and by foregoing meat a few days a week (or at least learning to eat it ethically).

On the growing front, while anyone can stick a pot or two of herbs on a windowsill, city folk with no gardening experience might find anything more is too intimidating. But it doesn’t have to be. Obviously beginners are not likely to dive straight into homesteading (going back-to-the-land) but check out our lifestyle sidebar for various easy alternatives.

It seems many agree with one blogger who said that “it is time for the consumer to step up and be responsible for what is put in their mouth.”