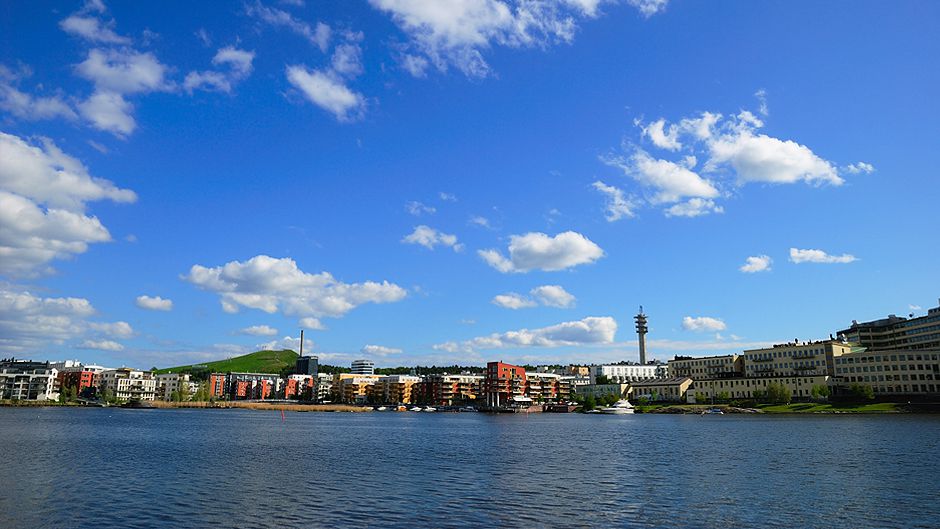 It is often said that our greatest successes arrive after our darkest hours.

What was once potentially a temporary Olympic village, is now a permanent and attractive lakeside community of 25,000 people and will be increasing to 35,000 residents in 2015. With 11,000 flats and 10,000 working people, Hammarby was deliberately designed so that residents commute to work using public transport, bicycles and carpools rather than by individually driving cars.

In 1990, well before a global discussion on climate change was taking place in the mainstream media, the Stockholm City Council began detailed planning for Hammarby with sewerage and service planners.

To date, the project has managed to reduce emissions by a significant 30-40%, although still below its original 50% target. Hammarby’s success has even helped Stockholm win the European Green Capital 2010 award.

The Hammarby Model was presented by Malena Karlsson to an international audience at The Great Transformation – Greening the Economy  conference in Berlin recently. Karlsson works for the energy saving Stockholm Glashusett (or Glasshouse) building that functions as the information centre for the Hammarby district.

She believes that the key to the village’s success is that eco-features are built directly into the design of the whole project.

“Seventy-five percent of the environmental goals are built into the buildings,” Karlsson recounted.

In contrast with more bottom-up approaches, where environmentally conscious citizens band together to live sustainably, Hammarby doesn’t rely on the environmental awareness of its citizens.

Even if citizens are not eco-conscious when they enter Hammarby, they will be after living there.

“There is a recycling room in every building,” boasts Karlsson.

All these rooms contain refuse chutes that are linked by underground pipes through which vacuum suction carries waste to a central collection station. Food waste is converted into “biogas — the purest environmental fuel there is”, as Karlsson calls it. Biogas, in addition to sludge from waste water, is used by the town’s buses and is also clean enough to naturally fertilise the area’s fields.

Hammarby village’s waste system does not emit many emissions because both incinerated household waste and treated wastewater is extracted and used to heat houses. Other features include a solar panel experiment that has yielded 50% of energy needed for supplying heated water.

Quality of life was also in the forefront of the minds of the town’s planners. Nature parks and a close proximity to water are central features of the complex, and are not just token inclusions.

“We have a holistic approach and do not just focus on carbon alone. We have green areas for biodiversity and well-being,” Karlsson said.

According to her, the integrated recycling system is also designed so that different waste categories are collected at different times. Fewer trucks enter the area simultaneously, thereby reducing the risk of accident. Another ubiquitous town feature is the water system that is designed with low flushing toilets and aerated taps.

Hammarby reflects the notion of beauty through simplicity — although some of the architecture can be considered ultra-modern, the village proves that good planning is just as important as good technology.

“None of it is outrageously high-tech; it’s just all thought out,” wrote environmentalist and writer Bill McKibben after he visited the town back in 2008.

However, not everyone will be pleased with changes to rural and urban landscapes resulting from new eco-town developments. Protestors in Britain in 2008 were concerned that proposed eco-towns would take up large amounts of open countryside, damage biodiversity and change the rural character of their communities.

UN Habitat predicts that by 2050, a whopping 5.3 billion people, or 70% of the world’s population, will live in urban areas.

Surely if the globe is to avoid catastrophic climate change, we will need to see many more Hammarby-style arrangements in both today’s and tomorrow’s high-emitting urban centres. The encouraging news is that plenty of other cities are implementing progressive sustainable urban development policies.

Public transport-friendly Munich, which aims to be majority dependent on renewal energy as early as 2025, has a designated ‘green zone’ wherein cars will be fined if they do not meeting the required emissions criteria.  Munich Deputy Mayor Hep Monatzeder categorizes his city as an example of where “policy dominates the private sector” and not the other way around.

This sort of thinking goes against the very market-orientated approaches, typical of Western civilization in the twentieth century. The availability of cheap fossil fuels has entrenched development of inefficient car-dependent suburbia in North America in particular, but also in other parts of the world we would not suspect, like Egypt.

Notable urban cities in the developing world are also gaining recognition, especially Curitiba in the south of Brazil which recently won the 2010 Globe Sustainable City Award. The signature feature of this city of almost 2 million people is the renowned bus system that is used by 32% of Curitibanos daily.

“I think it would be a good idea”

The evidence from these examples is clear: for innovative urban design strategies to succeed in the long term, they have to be supported by both city administrations and citizens.

“Hammarby’s success has been achievable because of integrated planning,” said Karlsson.

Hammarby’s talents will be on display when Stockholm hosts the Building Sustainability conference in October this year.

“The world has enough to cater for everyone’s need, but not everyone’s greed.”

But perhaps another famous Gandhi remark is also relevant here. When asked what he thought of Western civilization, the pacifist Indian replied, “I think it would be a good idea.”