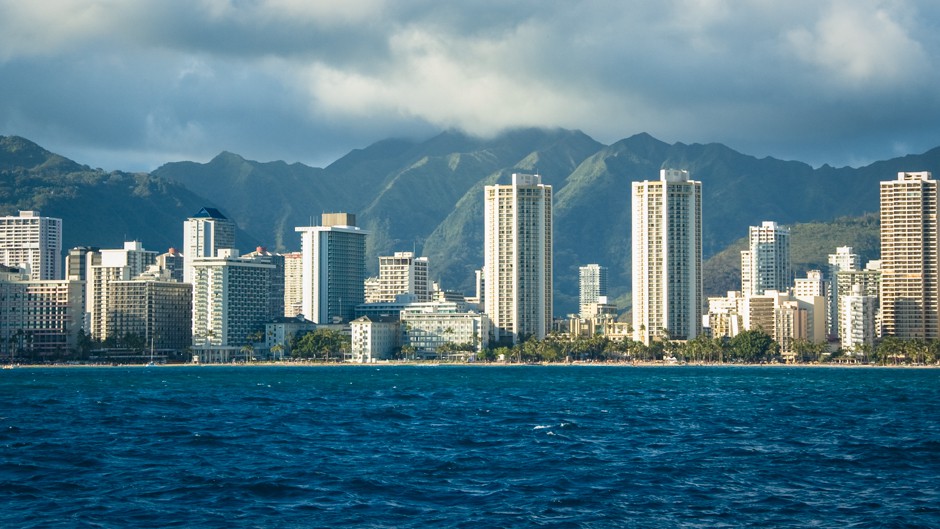 Like many islands, Hawaii is incredibly dependent on petroleum. It meets 85% of its energy needs by burning petroleum, according to State figures.

The distinguishing factor between Hawaii and the continental United States is that Hawaii relies on petroleum for electricity generation. Whereas the US as a whole meets only 3% of its electricity needs this way, Hawaii is at nearly 80%.

Oil-dependence is a common characteristic of islands. Fiji, for example, meets over 50% of its electricity through petroleum and Puerto Rico, over 90%. The use of petroleum for electricity is a common trait amongst islands because it is easily transportable and provides a firm source of power.

Although Hawaii is the most oil-dependent State in the US, the US Department of Energy recently shifted its view regarding Hawaii’s energy portfolio from being an “outlier” to a “model” — for the US and beyond. With the highest electricity rates in the country and immense potential for a suite of renewable energies including solar, wind, geothermal, and ocean energy, Hawaii was chosen as an ideal location to test and embark on transformative clean energy projects.

In January 2008, the Hawaii Clean Energy Initiative (HCEI) was launched by the US Department of Energy and the State of Hawaii.  HCEI aims to achieve a 70% clean energy economy by 2030. The goals for electricity are to achieve 30% energy efficiency and 40% renewable energy by the year 2030, and both of these goals are now codified within State law.

The State and the primary electric utility, the Hawaiian Electric Company, have entered into a voluntary agreement to expand a wide range of renewable energy types. Large wind farms, which represent the dominant indigenous energy source within the agreement, are intended for the islands of Lanai and Molokai and planning is underway to bring wind power to the most populated island, Oahu.

The idea of building an undersea cable, bringing power from less populated islands with greater renewable energy potential to the urban core of Honolulu on the island of Oahu (which holds roughly three-quarters of the resident population), was first debated in the 1970s. Although a 30-megawatt geothermal plant has been operating for more than two decades, started as a pilot project, geothermal was never brought to its initially intended scale (of nearly 500-megawatts) in part because it was seen to be a violation of Hawaiian cultural and religious beliefs.

Current plans to lay down cable have raised similar issues regarding the cost and environmental impacts, as well as the impact of wind turbines on local communities. This discussion has also renewed the idea of large-scale geothermal and the concomitant cultural dialogue.

The State recently completed a Bioenergy Master Plan.  Like conventional fossil fuels, bioenergy is appealing because it is a firm source of power and is easily transportable between islands.  Although Hawaii has a 150-year history of growing sugarcane and was once one of the world’s largest pineapple exporters, the plantations began a rapid decline in the second half of the 20th century.  The last sugarcane plantation on the island of Kauai is scheduled to close in August 2010.

A local biofuel industry is seen as potentially renewing currently idle agricultural lands.  However, indigenous sources of biofuels, such as ethanol from sugarcane, are estimated to be relatively quite expensive and are unlikely to develop without substantial government support.  A 10% ethanol blending mandate for motor fuels was implemented in 2006, for example, and has to date been met with imported sources.  As such, early discussion of and support for biofuels have waned considerably, due to a reluctance to switch from one imported fuel source to another.

The island of Oahu is likely to have more potential for solar photovoltaic, given the extensive rooftop real estate. To nurture the development of solar projects, the State gives a 35% tax credit in addition to the 30% federal subsidy for the cost and installation of units. There is, however, currently a restrictive net-metering cap (that limits the ability to sell power back to the electric utility) of 1%, which may impede large projects.

Nonetheless, there are new rules being considered by the State’s Public Utilities Commission to set a fixed price for renewable energy purchased by the electric utility (i.e., feed-in tariff) and to decouple the sale of electricity from utility profit margins.  These efforts are crucial to changing the incentive structure of the utility away from making money on the sale of kilowatt-hours to a fixed fee for transmission and distribution.

Already investors are feeling an attraction, with two companies recently signing a letter of intent committing to the process of structuring a solar project financing fund that could be as large as $50 million.

“With Hawaii’s feed-in tariff expected to go into effect this year, we believe that a dedicated pool of project capital would provide real competitive advantage in Hawaii’s rapidly evolving PV market,” said the lead company’s chairman/CEO.

Hawaii’s potential for ocean energy is also strong and a number of projects are underway regarding wave energy and ocean thermal energy conversion (OTEC). To-date however, none are yet commercially viable.

Setting standards for transportation fuels and technologies presents a more amorphous challenge.  There is a general move towards the electrification of ground transportation. With limited driving distances, electric vehicles may have particular promise. The 2009 state legislative session passed a law requiring large parking lots to incorporate charging stations, and the first opened a few weeks ago in Honolulu.

This is a small step toward establishing the necessary infrastructure for electric vehicles.Several companies, including Better Place and Phoenix Motorcars, have expressed interest in launching operations in Hawaii.

In Hawaii, like anywhere else, one of the largest challenges will be how to manage intermittent energy sources like solar and wind power within the existing electric grid. This issue is particularly pertinent to areas, like islands, with relatively small and isolated electricity grid systems.

The Hawaii Natural Energy Institute (HNEI) is modeling electricity grids on several islands to better understand how they need to be upgraded to accept increasing levels of intermittent renewable energies, as well as resiliency measures in the move toward electric vehicles. HNEI is also running several demonstration projects with technologies to help integrate renewable energies — such as “smart grid”, electric vehicles, and battery storage.

While the State’s efforts have been largely focused on increasing Hawaii’s energy security, greenhouse gas emissions reductions should likewise be considered a co-benefit of HCEI. Fearing Hawaii’s increasing reliance on oil resulting from the loss of biomass from the declining agricultural sector, a concerted effort was made to diversify Hawaii’s electricity portfolio in the early 1990s — and a coal plant was opened on the island of Oahu.

With hindsight and considerably more knowledge of the deleterious impacts of burning fossil fuels, it is imperative to constantly assess greenhouse gas emissions impacts within energy policy.

Like many of its Pacific island neighbors, Hawaii will be affected by the impacts of climate change; particularly in rising sea levels, ocean acidification and native forests threatened by invasive species.  HCEI establishes lofty goals for the State — with high hopes of breaking free of the typecast on islands and oil dependence.

Assistant ProfessorUniversity of Hawaii at Manoa

Dr. Makena Coffman is an Assistant Professor of Urban and Regional Planning at the University of Hawaii at Manoa. She specializes in environmental planning and policy related to renewable energy and climate change.