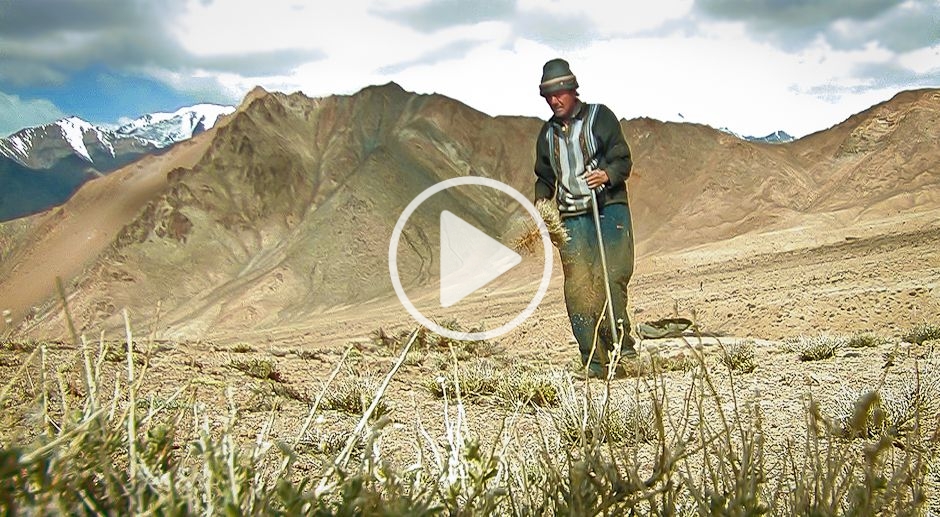 ‘Roof of the World’ is the Persian expression for the Pamir mountains in Tajikistan, which are among the highest in the world. On the high plateau of the Eastern Pamirs, where the average elevation is 3,500 m, winters are harsh and long and temperatures reach -50°C. Here, a small shrub called teresken is one of the few plants adapted to the semi-arid conditions.

Over the past 20 years, teresken has been cut for use as firewood. As energy supplies have become scarce since the end of the Soviet era and the import of fuel increasingly expensive, teresken has become major source of energy for heating and cooking for many of the 14,000 inhabitants of the Eastern Pamirs.

Around the district center of Murghab, which is home to half of the region’s population, an area of 70-80 km in circumference has been nearly cleared of vegetation. In rural settlements where livestock breeding is the main occupation, dried animal dung is used to supplement the teresken to help get people through the cold season that extends from September through May, or even June.

“Local communities are aware of the problems connected to the use of teresken, and they know that their livelihood depends on it.”

How is it that the people of Eastern Pamirs must now struggle so hard for fuel?

Before the Russians arrived in the late 19th century, there were no permanent settlements in the region. The nomadic Kyrgyz tribes whose livestock grazed in the pastures relied on natural resources for energy, just like they do today. But back then population numbers were much lower and anthropogenic pressure was lightened by a complex system of seasonal migration across the mountain ranges.

For the Soviets, Pamir was a strategic buffer zone with Afghanistan and China. So they brought in troops, and with them came the roads, telephone lines and electrification needed to support a military presence. Military and road construction camps meant opportunities for paid labour and sales of local produce. Combined with a state policy inducing settlements in the region, this led to a big jump in the population.

In the early 1990s, the Soviet political system collapsed and the economic structure crumbled with it. Within a few months, state employment plummeted from 100% to a few selected posts in schools, medical centers and government offices. In the Eastern Pamirs, where arable land is practically non-existent, livestock obtained in the course of privatization often became the only source of food and income. Imports of coal and diesel to the region almost ceased and, when available, can now only be purchased at the expensive market price, which few can afford.

This is how the majority of the population ended up relying on teresken as firewood. As shown in the video-brief, to collect enough fuel for the winter, relatives and friends combine resources to rent a truck so they can venture further and further into the mountains to find enough teresken.

Those who are lucky enough to own livestock can supplement their teresken needs by burning animal dung from the stable for heating and cooking. But even very rich households with a hundred animals can only meet half of their energy needs with dung, whereas an average family only owns around ten goats and sheep.

The use of teresken at this scale for this long has left its mark on the state of the region’s ecosystems, and the goods and services they provide to both people and wildlife, as well as for the global community.

Khudodod Aknazarov, Professor at the Pamir Biological Institute in Khorog, has tested more than a 1,000 different plant species for their potential use as fodder crops in the Eastern Pamir over the past several decades. He has found that teresken is one of two plants native to Eastern Pamir that are best suited to the local conditions.

Weather observations show that temperatures during the summer months are lower now than in the 1960s. The reduced temperature in the already short vegetation season has negatively affected the potential for natural seed-based reproduction of a number of alternative fodder crops.

Teresken itself grows slowly and may take many years to reach a reproductive stage. If conditions are unfavourable, its seeds may stay in the ground for up to twenty years before germinating. It is adapted to the specific climatic conditions of the region like no other plant.

The de-vegetation of vast areas of land here in the Eastern Pamirs, and their subsequent direct exposure to the sun, wind and rain (as well as to livestock trampling) are therefore leading to an irreversible loss of soil. This leads to a drop in the productive potential of the mountain ecosystems of the region, which directly affects local livelihoods and well-being.

Furthermore, they are contributing to desertification, loss of biological diversity and release of carbon stored in local vegetation and soils, which affect the global environment.

“Technological solutions, while essential for resolving the energy problem in the Eastern Pamirs, are insufficient for a sustainable change.”

Local communities are aware of the problems connected to the use of teresken, and they know that their livelihood depends on it. Those who cut teresken are now leaving the seeds of the plants in the fields in order to support a recovery. This is one of only a few measures they can take themselves, but they are not sufficient.

The most urgent actions needed are the insulation of houses and the distribution of energy saving technologies, such as more efficient cooking stoves. Local NGOs and donor agencies working in the Pamirs are developing diverse solutions. Establishing local production lines and creating market-based mechanisms for the distribution of energy saving technologies could greatly contribute to a change for the better.

Alternative energy sources, such as sun and wind, have a potential that is still largely unexplored. Cheap solar panels from neighbouring China have already entered the local market and are in use in some of the better-off households, while efforts are being made to distribute solar panels free to the poorest households with the hope of alleviating poverty. This improves the comfort and standard of living of the population but does not directly address the problems stemming from the use of teresken as fuel. On the contrary, it may extend the heating hours into the evening, as solar energy is used mainly for lighting and TV, without providing a substitute for teresken.

Larger scale applications of solar and wind energy are potentially useful for public or private enterprises but are not yet affordable on a smaller scale. The region has huge hydropower potential but given the scarce and dispersed population in the region as well as its poverty, both new construction and reconstructing the Soviet era power station in Murghab are currently economically unreasonable.

Hot springs can be found in many locations in the Pamir mountains, and are sometimes used for thermal spas, heating and growing vegetables in greenhouses. A more efficient use of this energy source could provide far more families with heat and fresh food, and might allow for exploring new sources of income generation, provided the necessary investment is mobilized. Hot springs also indicate the potential of geothermal energy yet to be explored.

“If we destroy the teresken this will lead to desertification”. Prof. Arknazarov

Technological solutions, while essential for resolving the energy problem in the Eastern Pamirs, are insufficient for a sustainable change. Widespread poverty is the key underlying challenge in the remote mountain region. Alternative energy sources may remain unaffordable for the majority of the population for years to come unless parallel efforts are made towards reducing poverty.

The primary source of income in the Eastern Pamirs is livestock breeding. So ensuring a sustainable livelihood for local inhabitants requires preserving the unique mountain ecosystems whose productive and protective functions are currently being undermined not only by the use of teresken but also by widespread overgrazing.

A trans-boundary initiative of the governments of Kyrgyzstan and Tajikistan, coordinated by the United Nations University at the regional level, is currently working towards addressing the interlinked problems of poverty and land degradation in the Pamir-Alai region through an integrated approach. The PALM project supported by the Global Environment Facility and a network of 15 national and international partners, is tackling barriers to sustainable land management in the region across governance levels.

In the framework of PALM, national working groups are strengthening the regional and national strategic and policy environment for sustainable land management. In parallel, research and advisory agencies are developing more targeted approaches for engaging with local communities in addressing the critical land use and management issues they face.

At the same time, target communities are developing their own land use and management plans and implementing sustainable land management micro-projects with the support of project facilitation. On-going activities provide local communities a chance to adapt to the changing conditions of life on the roof of the world.

Whether they are successful depends on the effort and commitment of the multiple stakeholders to think and act outside the box of old frameworks, to restructure existing roles, and to change established practices. While that sets the bar high, so are the stakes, both for local communities and for the global environment.

Energy Crisis In The Pamir Mountains by Nevelina Pachova is licensed under a Creative Commons Attribution-NonCommercial-ShareAlike 3.0 Unported License.

Nevelina holds a Master’s degree in International Development with a focus on environmental economics from the International University of Japan. She facilitates the implementation of the Innovative Land Use and Management Sub-Programme at the UNU. In particular, she is closely involved in the implementation of a GEF/UNEP Project on Sustainable Land Management in the Pamir-Alai Mountains in Central Asia (PALM), as well as in the initiation and development of other initiatives on innovative and sustainable resource use and management situated at the science-policy interface.