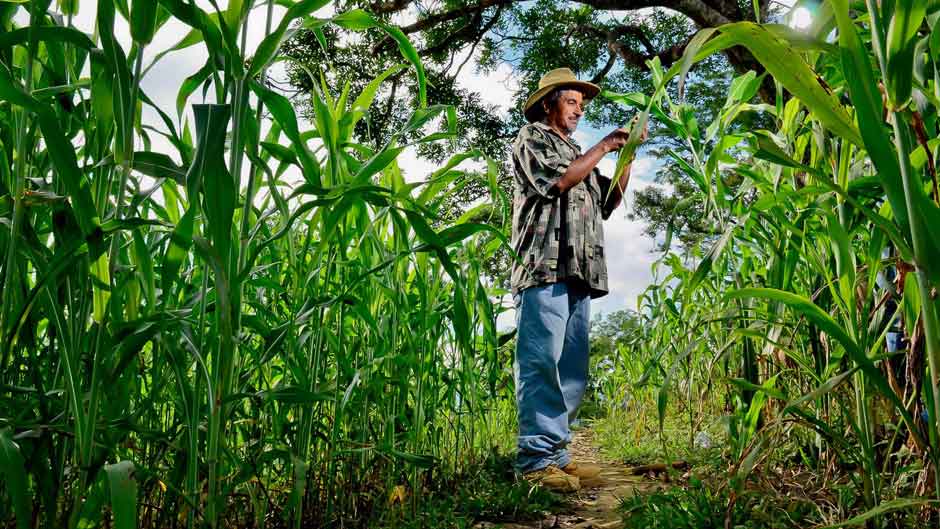 Agroforestry — the integration of trees and shrubs with crops and livestock systems — has strong potential in addressing problems of food insecurity in developing countries. Done well, it allows producers to make the best use of their land, can boost field crop yields, diversify income, and increase resilience to climate change.

To date, the uptake of agroforestry has been constrained partly because it has lacked a natural ‘home’ in policy space, but that may be changing thanks to a growing body of evidence of what it can achieve, and how to make it work. The Food and Agriculture Organization (FAO) last month published a guide to advancing agroforestry on the policy agenda with case studies of best practice, and is due to hold a conference on forests and food security and nutrition in May.

“In recent years we’ve seen increasing interest in agroforestry as an important component of sustainable land use and development,” says Douglas McGuire, team leader on the FAO’s Forest Resources Management team. “The many advantages it offers are being better understood.”

Much of that new understanding has come from the FAO itself and from the World Agroforestry Centre (ICRAF), which has built up a body of research on issues such as the use of particular tree varieties and how they can improve soil quality, complement specific field crops, and generate new income streams for smallholders.

For example, one of the major potential benefits of on-farm trees is their ability to replenish nutrient-depleted soil, and the results of a 12-year study by ICRAF published in September 2012 showed how the planting of a particular tree variety — Gliricidia — as a fertiliser tree alongside maize improved the stability of harvests of this staple food crop in sub-Saharan Africa.

The study, based on farming systems in Malawi and Zambia, found Gliricidia to be particularly effective at drawing nitrogen from the air and fixing it in the soil, reducing the need for large doses of manufactured nitrogen fertilisers. The leaves shed by the trees also replenish the soil, increasing its structural stability and capacity to store water.

Another fertiliser tree — Faidherbia, an indigenous African acacia — has also been found to be useful in agroforestry systems thanks partly to its unusual phenology. Faidherbia goes dormant and sheds its nitrogen-rich leaves during the early rainy season, when crops are being planted, and resumes leaf growth in the dry season. That means it fertilises crops at a useful time, but doesn’t compete with them for light, nutrients or water. Several studies have found Faidherbia-maize inter-cropping to increase maize yields, by as much as 400 percent in one area of Malawi.

This doesn’t mean that particular tree varieties should necessarily be pushed as “good” for all farming systems; rather, it’s important to use the right trees in the right place. “There are often trade-offs involved, and these need to be carefully assessed and balanced, according to the objectives one is trying to achieve,” says McGuire. “Soil fertility enhancement, erosion control, food production, wood production, and shading are all factors. Systems where wood production may be a main objective might not be the most favourable to enhancing soil fertility, but that may be an acceptable trade-off under the given circumstances.”

Even where certain trees can bring clear benefits, they are often a long-term investment. Resource-poor smallholders can be reluctant to allocate land to trees when it might take years to reap the rewards. But depending on the objectives, certain varieties or planting techniques can speed things up.

“Calliandra and leucaena are two leguminous trees which are known to deliver relatively quick pay offs for use as fodder for livestock,” says Frank Place, impact assessment adviser at ICRAF and co-editor of the FAO guide.

“The fodder shrubs can be planted in blocks or along internal or external boundaries and are fully productive in less than two years. They are cut and the leaves fed to cows, and the trees regrow for subsequent rounds of feeding. We have found that 500 trees are enough to provide daily inputs of the high protein fodder to a dairy cow.”

Another potential way of encouraging farmer buy-in is the use of payment for environmental services (PES). The FAO guide points out that “there is no agroforestry success story if incomes decrease considerably” and suggests that farmers introducing trees could be rewarded for the ecosystem services they provide.

Costa Rica provides a case study in how PES can be used as part of an agroforestry strategy. Through Fonafifo, its national forestry financing fund — which includes a specific agroforestry component — 10,000 contracts have been signed with smallholders over the past eight years, paying them to plant more than 3.5 million trees on farms. A 2010 study of the scheme found that 78 percent of farmer participants reported a rise in income levels as a result of taking part.

Access to markets is also an important way of ensuring the sustainability of agroforestry schemes. Tree fruits and improved milk yields from feeding cattle can improve household food security, but better access to supply chains can help smallholders reap greater financial rewards from their improved productivity.

“Tree products, apart from export crops like tea, coffee, and cocoa, do not enjoy the same level of investment in market information systems, market infrastructure or support in government programmes as do crops,” says Place. “There are many indigenous fruits such as baobab with high potential demand but very poorly organized value chains.”

One recent exception to this has come from the Allanblackia tree, a native African tree whose seeds contain an oil which has been found to be useful in food manufacturing. The oil first came to the attention of Unilever in 2000, and since then a supply chain based on smallholder production has been built through the Novella project — a private/public partnership including the ICRAF, the Netherlands Development Organisation (SNV), the World Conservation Union (IUCN), and Unilever.

Research by ICRAF on Allanblackia has enabled smallholders to grow superior varieties of the tree which fruit within four or five years, rather than the 15 or so years it would normally take for wild trees. The tree has also been found to complement existing cocoa field crops: while Allanblackia trees are growing, the cocoa trees provide the shade they need, and when they’re grown, they in turn act as shade trees for cocoa. They also provide harvests at different times of the year, ensuring more regular income for smallholders. By 2009, around 10,000 smallholder farmers, mostly in Ghana in Tanzania, had planted 100,000 Allanblackia trees, and the project has expanded to Liberia, Nigeria and Cameroon. According to ICRAF, the scheme could eventually generate $2 billion (£1.32 billion) a year for smallholders, about half the value of west Africa’s cocoa crop.

The potential of agroforestry is well documented, though structural challenges remain. Issues of land tenure and forest codes, for instance, still discourage smallholder investment in trees in some places. The challenge for development actors is to ensure that the multiple benefits of integrating trees into land-use systems are heard in the food security debate, so that more of what we know can be put into practice.

This article was originally published by the Guardian on 26 February 2013.