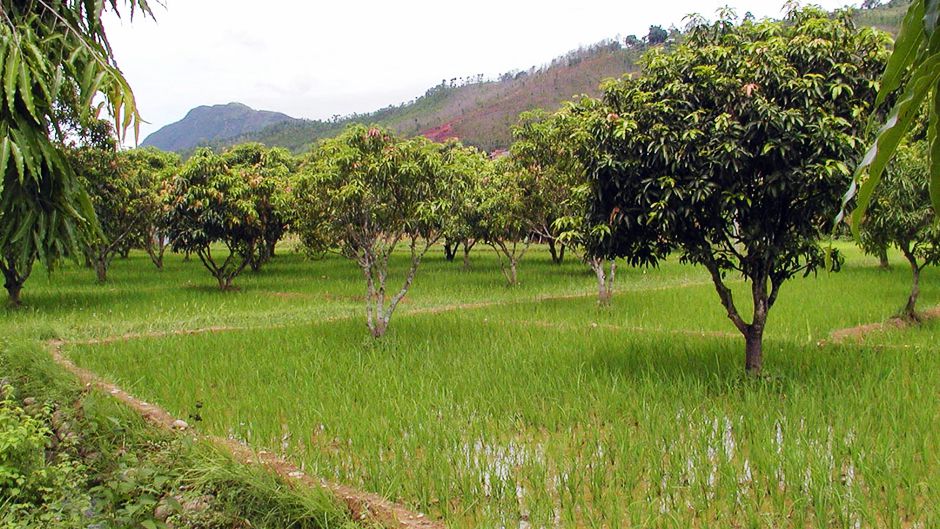 Our food system is not sustainable. Not in some ambiguous, unhealthy for the environment sort of way. We’re talking sustainable as in “able to be sustained.”

And we’re talking in the near future. Although many designers, ecologists and farmers are beginning to finally look at solutions, only time will tell if these solutions will come fast enough.

Before we look at these solutions, however, why exactly is there so much concern these days about our food system being unsustainable?

The evidence is in the market. World wide, food prices went up about 32 percent from 2005 to November 2009, as indicated by the Food and Agriculture Organization of the UN (FAO) food price index. In short, according to the FAO, another 100 million people have been pushed into hunger in 2009, largely due to higher food prices.

A report by Purdue University agricultural economists for the Farm Foundation notes that, although food prices have come down since historic highs last year, the main drivers of food prices remain unchanged. These drivers include the prices of fertilizer, water, electricity and livestock feed, among myriad other complex factors.

For example, in Canada, fertilizer prices went up 60 percent in 2008 alone, and numbers are similar elsewhere. Food prices here are more stable than in many other parts of the world, although prices in the 12 months to February 2009 were still up 7.4 percent according to Statistics Canada.

Such examples beg the question: when will the average person in rich countries finally begin to wake up and stop taking their food for granted?

What exactly is the problem, and what can we do? Besides the obvious surface problems, many people believe a fundamental shift must occur in the way we design (or fail to design) our life support structures, such as our food system.

Designer and architect William McDonough and chemist Michael Braungart noted in their book, Cradle to Cradle: Remaking the Way We Make Things, that we are accustomed to thinking that industry (e.g., industrial agriculture) and the environment are incompatible. It is our very perception of this conflict that is the problem, they believe.

“What if humans designed products and systems that celebrate an abundance of human creativity, culture, and productivity? That are so intelligent and safe, our species leaves an ecological footprint to delight in, not lament?” McDonough asks. He has designed many completely non-toxic, infinitely recyclable and biodegradable products, from chairs to whole buildings, which back up his optimism about such a society being possible.

It’s possible with our food systems too, and many people around the world are demonstrating it, including Sustainable Harvest International and the World Agroforestry Centre.

The problem, when it comes to food, is that we don’t think of a farm as an ecosystem, and we don’t design them as such. Even conventional organic farms lack the stability of a healthy, permanent ecosystem, and they usually require many outside inputs (such as fossil fuels and organic matter) that are fundamentally unsustainable.

Unfortunately, about 40 percent of the world’s agricultural land is now seriously degraded. UN figures indicate that an area of fertile soil the size of Ukraine is lost every year because of poor farming practices. And it’s happening everywhere.

To put it bluntly, a new system of agriculture is needed to prevent mass starvation. No soil = no food.

Imagine a different food scenario, for a moment. Imagine a system that uses vertical space, like a forest, to achieve higher yields. Imagine all of the species in the system, from forest canopy, to understory, to shrubs, vines, smaller plants, ground covers and roots, all yielding food and/or medicine.

Then, imagine your favourite foods interspersed among garden clearings in this edible wilderness, receiving nutrients, protection from wind and pests, mulch, minerals, and everything else they need from the companion trees and plants around them. Imagine a food forest. These forests exist.

Natural forests build organic matter very quickly, not only protecting soil from erosion, but actually creating it. Their biomass yields are far beyond a modern farm system, and what’s more, we can (and do) mimic them, but with species yielding edibles and medicinals. And we can do it in the city as well as rural areas.

There are even options for large scale industrial systems, which can employ alley cropping techniques that are being researched at the University of Guelph in Canada, the University of Missouri in the US, and many other places around the world. This involves planting valuable tree and other perennial crops in rows, with traditional or new crop choices in the alleys between for mechanical harvesting.

Ecologically designed food systems typically use a diversity of perennial tree and non-woody crops, which provide permanent cover and protection from erosive wind and water forces.

At the same time, this diversity leads to many root depths, shapes and sizes, which stabilize the soil and improve its structure, while minimizing competition. This fosters better water penetration (which prevents erosive runoff), and allows more oxygen into the soil, both of which feed the life of the soil, which in turn feeds the plants.

Woody and non-woody perennials also have deeper root systems than annuals, which means they have a lot more potential for capturing and recycling nutrients (significantly reducing the need for outside inputs).

Their litter contribution to the soil’s surface is also, typically, much greater than traditional crops (which still have a place). This free layer of protective mulch is then slowly broken down by decomposers (insects, worms, bacteria, fungus) into soluble plant nutrients. On top of this, these decomposers are the nutrients, and their life and death cycles make these nutrients available to plants consistently over time.

Other management practices in a sustainable food system that decrease the erodibility of the soil include no-till practices and the absence of heavy machinery, especially when the soil is wet. This lessens compaction (which decreases water infiltration and increases erosive runoff), and helps maintain ideal soil structure for root growth and health.

The concepts and principles outlined here are only a small part of the complex interactions and forces at play in an ecologically designed food system. Such ecological principles can be used on any scale.

Given that resources are not infinite, and many are quickly running out (like our soil, our fertilizers, and our main energy sources), it might be wise for us to think about learning to design systems to grow at least some of our own food within urban areas, while designing our rural farms to be truly sustainable as well.

And while we’re at it, we’ll be creating a world that not only supports life, but gives meaning to it. Our goal, as McDonough puts it, should be “a delightfully diverse, safe, healthy and just world, with clean air, water, soil and power – economically, equitably, ecologically and elegantly enjoyed.”

Trent Rhode is an ecological designer and gardener, teacher, journalist and researcher living in Peterborough, Ontario, Canada. He has a background and education in communications and sustainable land use practices, and has been studying ecology and natural farming since 2004.