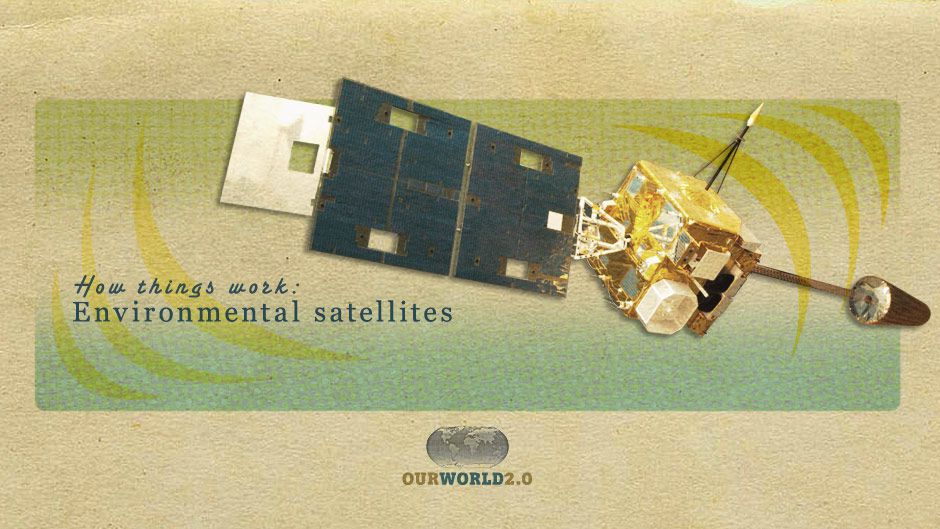 Satellites provide invaluable services to society. They have brought together people from different continents by providing an instantaneous link through satellite telephone and television signals.

Another important application of satellites, perhaps one we think less about, is the continuous monitoring of the global environment. Recently, the world has seen shocking pictures of the BP oil spill from SkyTruth, an NGO that promotes the use of remote sensing for environmental protection.

Yet, as this article will illustrate, the range of environmental uses for satellites goes far beyond weather forecasting and human-made disaster monitoring.

Evolution and types of satellites

Satellites have come a long way since the Soviet Union launched Sputnik 1, the first ever artificial satellite, into space on 4 October 1957. Sputnik 1 was a significant scientific achievement. Measuring just 22 inches in diameter and weighing 184 pounds, it circled the Earth every 95 minutes, travelling 29,000 kilometres an hour at an altitude of 900 km.

The Sputnik 1 launch elicited interesting reactions, most of which turned out to be wrong. At the time, military experts said that satellites would have no practical application in the foreseeable future. On 1 April 1960, the US launched TIROS-1, the world’s first weather satellite. It spent only 78 days in orbit, but its impact endures today.

[quote quote=”From 1960 on, there have been continuous improvements in instruments and technology and the number of uses for satellite data has also increased.” type=”image” image=”2208″ ]

“This satellite forever changed weather forecasting,” says Dr. Jane Lubchenco, Administrator of the US National Oceanic and Atmospheric Administration (NOAA). TIROS-1 had very limited capabilities: two cameras and two video recorders. But from 1960 on, there have been continuous improvements in instruments and technology. The number of uses for satellite data has also increased.

There are two basic types of satellite orbits: geostationary (“geo” for short) and polar-orbiting. Up until 1975, all satellites had an orbit around the poles. Polar-orbiting satellites fly at low altitudes, circling the Earth once every 100 minutes, and covering the entire planet. Three polar-orbiting satellites can observe the entire planet every six hours. This orbit allows a closer look at the Earth, producing images and measurements with a high spatial resolution. These satellites are always on the move and therefore do not allow continuous observation of a particular geographical area.

In order to provide continuous observation capabilities, geo satellites were developed. These fly at high altitudes — 36,000 km — over the equator and move at the same speed as the Earth’s rotation. By hovering over the same spot, they can observe a particular area continuously. However, geo satellites are limited in that, due to the Earth’s curvature, they cannot observe the polar regions.

Fortunately, polar and geo satellites complement each other, combining the former’s worldwide coverage and high resolution with the latter’s continuous coverage.

Satellites are ideal for observing the global environment as they are capable of revealing and monitoring remote environments, hidden features, and even events that the human eye cannot detect. They provide reliable data 24 hours a day, seven days a week on the following atmospheric phenomena that are essential for weather forecasting:

Satellites provide the following data on the oceans:

The following land features can also be observed via satellites:

Satellites can be owned and operated by government agencies, international organizations, or by the private sector. One of the most advanced polar-orbiting commercial satellites, the GeoEye-1, provides images with a resolution of 0.5 metres.

As SkyTruth president John Amos points out, in reference to Google Earth, “[r]evolutionary imagery that was basically spy technology a few years ago is suddenly at everybody’s fingertips.”

Satellites are ideal for monitoring climate change because they can monitor the concentration of greenhouse gases in the atmosphere, such as aerosols, water vapor, carbon monoxide (CO), carbon-dioxide (CO2) and methane.

Japan launched Ibuki (known in English as the Greenhouse Gases Observing Satellite, or Gosat), the world’s first satellite specifically designed for this purpose, in January 2009. Ibuki is a polar-orbiting satellite that can measure greenhouse gases at 56,000 points worldwide, providing the most comprehensive view of concentration of these gases so far.

[quote quote=”Satellites are ideal for observing the global environment as they are capable of revealing and monitoring remote environments.” type=”image” image=”2222″ ]

Deforestation is a significant source of greenhouse gases, and reduces biodiversity. Satellites are ideal to monitor forest cover worldwide. There are global databases containing satellite images for the past 30 years, making it possible to detect trends and areas where deforestation occurs. Thus, satellites can assist the UN Collaborative Programme on Reducing Emissions from Deforestation and Forest Degradation in Developing Countries (UN-REDD) to achieve its objectives.

Validation of satellite measurements — that is, verification with ground observations — is very important. Processing raw data and transforming it into satellite images and applications requires complex formulas called algorithms. Validation of satellite images and products should be conducted periodically. Calibration, or the process of verifying the accuracy of measurements, is equally important. Satellite instruments can be calibrated by comparing them to other satellites, as well as to ground observations.

Next generation and beyond

Over the next decade or so, our capabilities to observe the global environment will improve dramatically. Satellite agencies in Canada, China, India, Japan, Russia, the United States and Europe are working hard to bring into operation the next generation of satellites.

These satellites will have significantly better sensors that will allow more accurate weather forecasts. They will also generate higher resolution images, and more measurements to advance our understanding of the global environment, in turn enabling scientists to develop better climate change models.

The US, for instance, is currently developing the next generation of polar and geostationary satellites. The Joint Polar Satellite System (JPSS), developed and managed by NASA and the National Oceanic and Atmospheric Administration (NOAA), will constitute the most advanced Earth observation satellite system ever built.

[quote quote=”Over the next decade or so, our capabilities to observe the global environment will improve dramatically.” type=”text” ]

JPSS will generate high-resolution images and measurements of the entire planet every six hours. The volume of data generated by these satellites will be so large that conventional software and data analysis systems would be swamped. In order to handle this stream of data, new software and worldwide network of 15 antennas to downlink the data are being developed by Raytheon, a private company, under a contract awarded by NOAA.

NOAA and NASA are also jointly developing the new Geostationary Operational Environmental Satellite (GOES-R) that will provide faster scanning and higher resolution images of the atmosphere, land, and oceans in the Western Hemisphere. GOES-R will also detect lightning events in the entire Western Hemisphere in real time, which will allow more accurate weather forecasts and more warning time for severe thunderstorms, hurricanes, and tornadoes. Other countries are also in the planning stages for developing satellites with similar capabilities.

Finally, the Group on Earth Observations (GEO) was launched in response to calls for action at the 2002 World Summit on Sustainable Development. Drawing on satellites from countries around the world, GEO is currently building the Global Earth Observation System of Systems (GEOSS) to provide the most comprehensive view of the state of the global environment. GEOSS will collect and disseminate data on the planet’s weather, climate, biodiversity, ecosystems, agriculture, energy, health, disasters, and water.

The importance of satellites, as well as the number of applications for their data, is likely to increase in the near future. Satellites will play a significant role in monitoring the factors and impact of climate change, and provide valuable inputs to promote a more environmentally sustainable development.

The opinions expressed herein are those solely of the author and are not made on behalf of his employer.