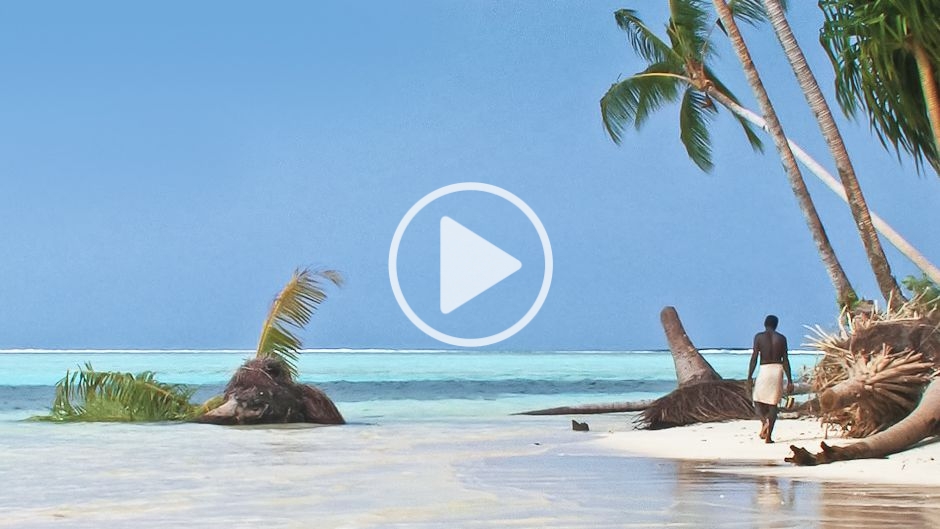 For some time now, Carteret Islanders have made eye-catching headlines: “Going, going… Papua New Guinea atoll sinking fast”. Academics have dubbed us amongst the world’s first “environmental refugees” and journalists put us on the “frontline of climate change.”

So perhaps you have heard how we build sea walls and plant mangroves, only to see our land and homes washed away by storm surges and high tides. Maybe you can even recognise the tragic irony in the fact that the Carterets’ people have lived simply (without cars or electricity) — subsisting mainly on fish, bananas and vegetables — and have therefore not had much of a “carbon footprint”.

You might know that encroaching salt water has contaminated our fresh water wells and turned our vegetable plots into swampy breeding grounds for malaria-carrying mosquitoes. Taro, the staple food crop, no longer grows on the atoll. Carteret Islanders now face severe food shortages, with government aid coming by boat two or three times a year.

However, the story you have not likely read is the one of government failure and the strategy we developed in response, so as to engineer our own exile from a drowning traditional homeland.

Carterets’ people are facing, and will continue to face, many challenges as we relocate from our ancestral grounds. However, our plan is one in which we remain as independent and self-sufficient as possible. We wish to maintain our cultural identity and live sustainably wherever we are.

While we call on the Papua New Guinea government to develop policy, we are not sitting by. Instead, we now want to see the media headlines translate into practical assistance for our relocation program. And we hope our carefully designed and community-led action plan can serve as a model for communities elsewhere that will be affected by climate change in the future.

Situated 86 km Northeast of Bougainville, the main island in the autonomous region of which the Carterets form part, our atoll is only 1.2 meters above sea level. They say evacuation of the islands was inevitable as for many, many years erosion has been doing its work.

“King tides”, or particularly high tides, are now doing worse. Originally the Carterets were six islands, but Huene was split in half by the sea and so now there are seven. In 1995 a wave ate away most of the shorelines of Piul and Huene islands. Han island, as shown in the video-brief, has suffered from complete inundation.

What climate change’s exact role is, even experts are hard put to answer. Debate has raged over whether the islands are sinking, if tectonic plates play a role, and whether sea levels are in fact rising.

We do not know much about science, but we watch helplessly as the tides wash away our shores year in and year out. We also know that we are loosing our cultural heritage just as the sea relentlessly wipes out our food gardens.

We do not need labels but action.

To relieve the land shortage caused by eroding shorelines, in 1984 the government resettled 10 families from the Carterets to Bougainville, but they returned to the atoll in 1989 in flight from what began as a protest by landowners against a mining company and escalated into civil war. Since that time, and despite many promises, very little has been done by the Bougainville or PNG government to assist Islanders’ relocation efforts.

Tired of empty promises, the Carterets Council of Elders formed a non-profit association in late 2006 to organise the voluntary relocation of most of the Carterets’ population of 3,300.

The association was named Tulele Peisa, which means “sailing the waves on our own”. This name choice reflects the elders’ desire to see Carteret Islanders remain strong and self-reliant, not becoming dependent on food handouts for their survival.

After much hard work, the first five fathers moved to Tinputz in April, onto land donated by the Catholic Church. These fathers are already building gardens so that their wives and children can join them later when there is food.

“I have volunteered to relocate as I would like my family to be able to plant food crops like taro, banana, casava, yams and other vegetables that we cannot grow on the island,” said Charles Tsibi. “I also want my family to grow some cash crops like cocoa to sustain our future life here in Marau, Tinputz.”

According to a recent Tulele Peisa survey, 80 other families would like to move immediately and 50 wish to move later on. Twenty families have already relocated on their own. Thirty families remain unsure about relocating.

Tulele Peisa’s plan is for Carteret Islanders to be voluntarily relocated to three locations on Bougainville (Tinputz, Tearouki and Mabiri) over the next 10 years. Our immediate need is for funding so that we can accomplish the initial 3-year phase of our Carterets Integrated Relocation Programme (download the paper for details).

The list of objectives is long and challenging but our plan is holistic so we have faith it will succeed.

Firstly, the three host towns have a population of 10,000 and we are cognisant of the many complexities involved in integrating the Carterets’ people into existing communities that are geographically, culturally, politically and socially different. Therefore exchange programs involving chiefs, women and youth from host communities and the Carterets are in progress for establishing relationships and understanding.

We also need to get on with implementing agricultural and income generation projects (like the rehabilitation of cocoa and coconut blocks), as well as education, health and community development training programmes.

“The plan is slow to achieve but covers all areas dealing with human relations and has adaptation alternatives, such as small cash income activities for relocated families,” said elder Tony Tologina, chief of the Naboin clan.

On the long term, we want to build the capacity of Tulele Peisa to be certain it can carry out its objectives and also develop it as a resource agency for the Carterets and host communities on Bougainville.

Forever linked to our reefs

An important part of the programme is that it will also set up a Conservation and Marine Management Area that will let Carteret Islanders make sustainable use of our ancestral marine resources.

To keep the links between the relocated Carterets’ people and their home island, sea resources and any remaining clan members (who are not yet relocated), the plan includes developing an equitable sea transport service for freight and passengers.

“In the future, we will keep coming to these reefs and manage them as our fishing ground,” explained community youth leader Nicholas Hakata. “When our children come back, they will have a connection to their heritage.”

“We have fully documented our process since beginning our plan and will continue to, for the sake of developing a model relocation programme,” said Thomas Bikta, a chief from Piul Island.

“At the same time, we are developing and formulating a Carterets relocation policy that we will advocate to the Autonomous Bougainville Government and the rest of the world,” Bikta added.

We also intend to build an alliance of vulnerable Pacific communities impacted by climate change who can lobby and advocate for justice and policies that recognise and support those affected.

We think the Papua New Guinea government must set an example of such policies by re-developing the Atolls Integrated Development policy and beginning a recognized financing mechanism similar to REDD (Reducing Emissions from Deforestation and Forest Degradation in Developing Countries). The committee or board of which must include all relevant stakeholders, including community representation and other expertise, not just government officials.

A new UNU-EHS report, In Search of Shelter, details how climate change is having grave effects on peoples around the world.

“The impacts of climate change are already causing migration and displacement,” the study states. By mid-century, “the prospects for the scope and scale could vastly exceed anything that has occurred before.”

This video brief and article complements the on-going Indigenous Peoples Climate Change Assessment. It forms part of the work of the UNU-IAS Traditional Knowledge Initiative. UNU would like to thank the Christensen Fund for their support for this initiative.

Tulele Peisa executive director Ursula Rakova was born on Han, the main island of the Carterets. After leaving the atoll to study social administration at Papua New Guinea University, she became a pioneer in the environmental movement, working for non-governmental organizations such as the Individual and Community Rights Advocacy Forum, Environment Law Centre and OXFAM. At the request of a group of Carteret Island chiefs, she decided to return home in 2006 to help form Tulele Peisa. Ursula received the Pride of Papua New Guinea award in 2008 for her outstanding contribution to the environment.