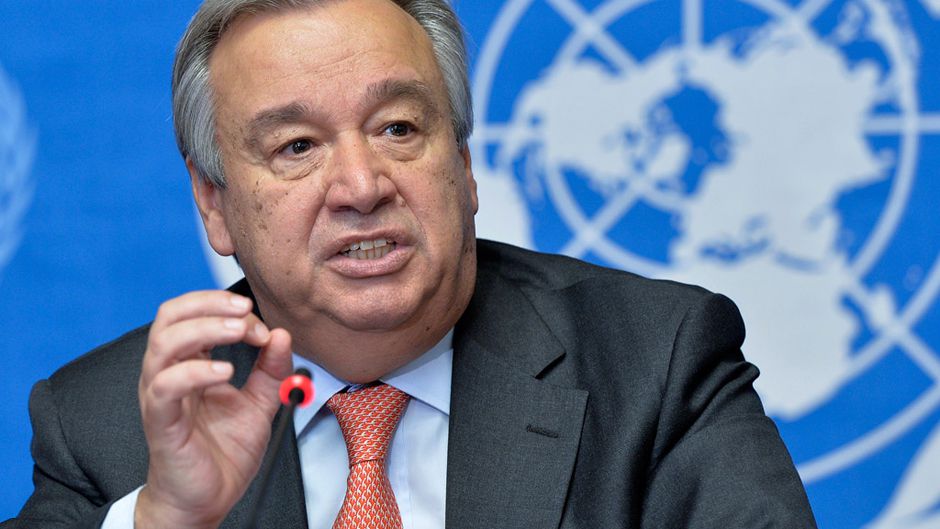 The global humanitarian system has reached its limits in dealing with the upward trend in forced displacement due to mounting pressures from conflicts and persecution around the world, the head of the United Nations refugee agency warned today, calling on the humanitarian community to “think out of the box” when it comes to funding emergency response.

In a briefing to the UN General Assembly’s main social, humanitarian and cultural body (Third Committee), António Guterres, UN High Commissioner for Refugees, said that at the end of 2013, more than 51 million people were in displacement due to multiplying conflicts, climate change, population growth, urbanization, food insecurity and water scarcity, and events indicate that this number will be even higher by December of this year.

“The humanitarian community is scrambling to respond, but every new crisis clearly shows that the system has reached its limits,” he stressed.

“To those who trigger and prolong conflicts, leaving humanitarians to clean up the mess, it is time to stay that this must stop. We can no longer pick up the pieces,” he added.

Presenting his agency’s report, Mr. Guterres said that one of the reasons for the system reaching its limits is that humanitarian funding is close to bankruptcy. While funding has increased, the needs have grown much faster, causing the gap to widen.

At the end of 2013, more than 51 million people were in displacement due to multiplying conflicts, climate change, population growth, urbanization, food insecurity and water scarcity, and events indicate that this number will be even higher by December of this year.

To address the growing shortfall, measures must include continuing the strong investments already being made in building partnerships with emerging donors, as well as further expanding opportunities with the private sector and reviewing the relationship between humanitarian and development funding.

“It is also essential to think out of the box and be more creative when it comes to funding emergency response,” he said, noting that, in the future, humanitarian response should be able to rely partially on assessed contributions.

Such action could minimize the dramatically increasing gap between needs and available resources in humanitarian response, he said. Under the leadership of Valerie Amos, UN Under-Secretary-General for Humanitarian Affairs and Emergency Relief Coordinator, the UN Office for the Coordination of Humanitarian Affairs (OCHA) is now commissioning a study to explore how this might work.

The total international humanitarian budget reaches just 10 percent of what is available globally for development cooperation, Mr. Guterres continued. In the current global context, development funds are not accessible quickly enough in many situations where they are needed, forcing humanitarian actors to act as substitutes for the absence of structural assistance.

“Humanitarian assistance only gets a fragment of the resources, but it often has to cover things it really should not,” he said.

As such, development agencies, donors and international financial institutions should work together to increase flexibility and complementarity between short and longer-term interventions, as well as be present on the ground from the very beginning of a crisis.

“It is in our common interest, and our collective responsibility, to ensure that ‘bridging the gap’ is more than a slogan. But this requires strong political leadership to change the objectives, the priorities, and, above all, the organizational culture of development cooperation,” he stressed.

The most important way in which the humanitarian system must change course to avoid a complete failure of humanitarian response in the future is conflict prevention.

Another factor is the need to building an effective universal partnership for humanitarian action, Mr. Guterres said, expressing hope that the upcoming World Humanitarian Summit in Istanbul can be used to work towards a universal approach to humanitarian values and principles.

“The present multilateral humanitarian system is essentially a Western creation,” he said.

“But today, what is needed is a truly universal partnership that can draw on the totality of efforts and resources to meet humanitarian needs,” he added. There was some encouraging progress in Africa, Mr. Guterres noted, including the recently launched voluntary return operation of some 30,000 former Angolan refugees from the Democratic Republic of the Congo (DRC). In the Americas, a comprehensive initiative for Colombian refugees is being implemented in Ecuador, combining improved livelihood opportunities, resettlement and facilitated labour mobility in the region.

Mr. Guterres concluded his address by emphasizing that the most important way in which the humanitarian system must change course to avoid a complete failure of humanitarian response in the future is conflict prevention.

Conflict prevention and conflict resolution should always be led by the countries affected, although countries require stronger international support, including in mediation and stabilization efforts, he said.

“This extends far beyond the realm of humanitarian action, and essentially comes down to a question of international political resolve to address the root causes of displacement,” he said.