India Plans to Convert Water Pumps from Diesel to Solar 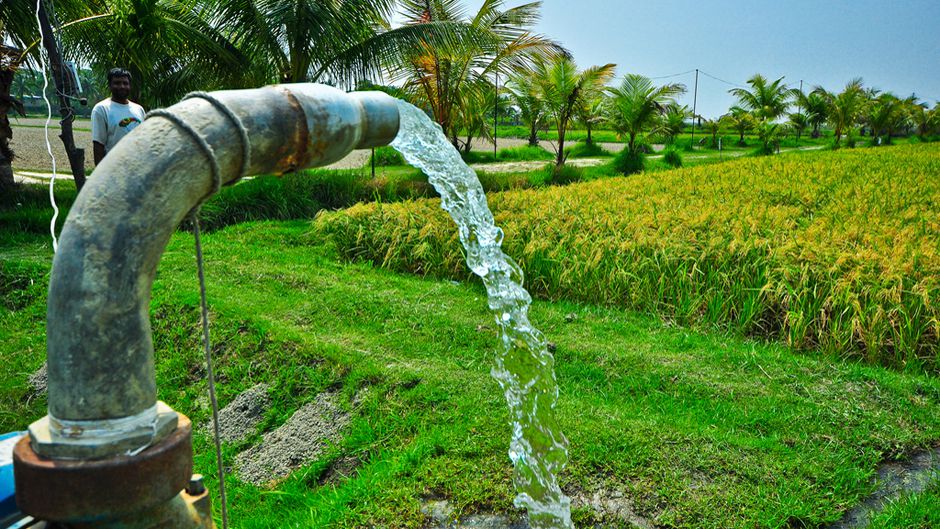 The Indian government is aiming to swap out 26 million fossil-fuel-powered groundwater pumps for solar-powered ones, Bloomberg reports.

The pumps are used by farmers throughout the country to pull in water for irrigation, and currently rely on diesel generators or India’s fossil-fuel-reliant electrical grid for power. Pashupathy Gopalan, the regional head of SunEdison, told Bloomberg that 8 million diesel pumps already in use could be replaced right now. And India’s Ministry of New and Renewable Energy estimates another 700,000 diesel pumps that could be replaced are bought in India every year.

“The potential is huge,” said Tarun Kapoor, the joint secretary at the ministry. “Irrigation pumps may be the single largest application for solar in the country.”

The program works by subsidizing the swap, and operates in different capacities in India’s various states, sometimes subsidizing the solar pumps up to 86 percent. Thanks to that aid, and the dramatic collapse in prices for solar power, the pumps pay themselves off in one to four years, according to Ajay Goel, the chief executive officer of Tata Power Solar Systems Ltd., a panel maker and contractor. And Stephan Grinzinger, the head of sales for a German solar water pump maker, told Bloomberg the economics will only get better: diesel prices will rise and spike during farming season, and economies of scale will help the swap program.

Two-thirds of India’s electricity is generated by coal, with natural gas and hydroelectric making up most of the rest. But the monsoon season is growing more erratic — likely due to climate change — making power from the hydroelectric dams less reliable as well. Coal is growing in economic cost for India, so power plants often sit idle, and the coal that is easy to reach would require displacing major population centers.

The national grid that relies on those fuels has seen few updates since it was constructed in they 1960s. It’s also under growing stress from India’s rising middle class, which is adopting air conditioning and running water in massive numbers — all in a country prone to heat waves, again thanks in part to climate change. As backup, many Indian residents and businesses rely on diesel generators, which leaves them vulnerable to the fuel market and contributes to fossil fuel emissions.

Even when the grid is working, around 300 million of India’s 1.2 billion inhabitants don’t have access to it. When it’s not, rolling blackouts are common. Many farmers are able to draw only four hours of power a day from the grid, and that often at night. Heat waves in 2013 were accompanied by widespread blackouts, and a two-day grid failure in 2012 left over 600 million Indians without power.

Ironically, thanks to the kind of distributed and sustainable generation the swap program represents, many of India’s rural poor actually faired much better during the blackout than the grid-dependent middle-class. It’s one of the strengths of solar in particular, even before climate change is considered: a more decentralized power system, based around “microgrids” and individual power generation, rather than a centralized system reliant on the good function of large, singular power providers. In India in particular, sunlight is most plentiful at the times when demand tends to peak. That leaves the power system more adaptable, less prone to central failures, and thus more hospitable to those still struggling to overcome poverty in particular.

Jeff Spross is a reporter and video editor for ThinkProgress.org. Jeff was raised in Texas and received his B.S. in film from the University of Texas, after which he worked for several years as an assistant editor in Austin and Los Angeles. During that time Jeff co-founded, wrote and produced The Regimen, a blog and podcast dealing with politics and culture. More recently, he has interned at The American Prospect and worked as a video producer for The Guardian.