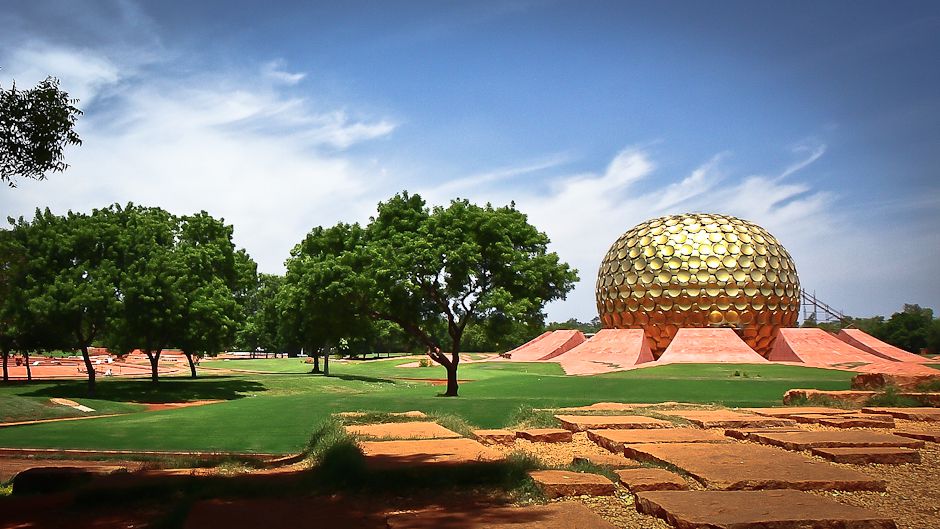 Summers on the eastern Indian coast are hot and dusty with temperatures often shooting up to 40 degrees Celsius. The red sand in this eastern part of the state of Tamil Nadu is crisscrossed with tiny streets that link together different settlements and villages. It’s an experiment that began 50 years ago — Auroville or the “global village.” Back then, there was nothing much here apart from dusty, red sand. Today, huge banyan, fig and cashew trees provide much-needed shade for Auroville’s estimated 2,000 inhabitants.

No two houses are the same in Auroville. The settlements are as diverse as the inhabitants who include architects, environmental activists and hippies. Reed and thatched huts rub shoulders with roofs made of tetrapak while others look like ships with sails or Indian temples. A few owners also seem to have a penchant for the Bauhaus style.

Auroville’s founding can be traced back to an idea by the French traveler Mira Alfassa who wanted to establish a city of peace, a place where people from all over the world would leave in harmony. That plan was even supported by the UNESCO at the end of 1996. The “global village” is named after Sri Aurobindo, an Indian philosopher who was Alfassa’s yoga teacher.

Gilles Guigan, who lives in Auroville today, remembers that an invitation was sent out to all foreign embassies in Delhi as well as state governments in India to attend Auroville’s founding. Several representatives came for the opening ceremony. Some 5,000 people came to the city in the south Indian state of Tamil Nadu at the time and many stayed on. 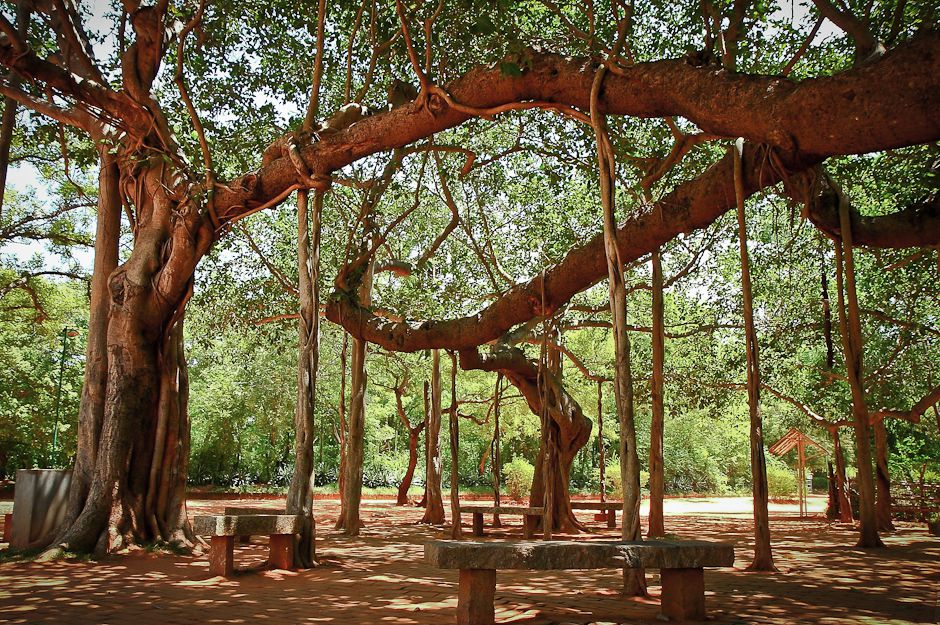 These first inhabitants began planting trees which finally spawned the world’s largest and most ambitious reforestation project which won financial support, among others, by the Indian government from 1982 to 1987 which provided funds worth $100,000. Today, some two million trees thrive here.

In order to underscore the place’s harmony with its natural surroundings, architect Roger Anger originally planned the “city of the future” without cars. Indeed, few cars do travel through the forested area though the air buzzes with sounds of numerous scooters and motorbikes. In the last few years, they’ve been joined by several electric-powered vehicles, buses and a few small cars.

Lalit Bhati has lived in Auroville for the last 14 years. The city planner first heard of the model city while he was studying. He visited the place while on his first job in order to familiarize himself with Auroville’s economic system. “I talked to a lot of people and found them really inspiring,” Bhati says. 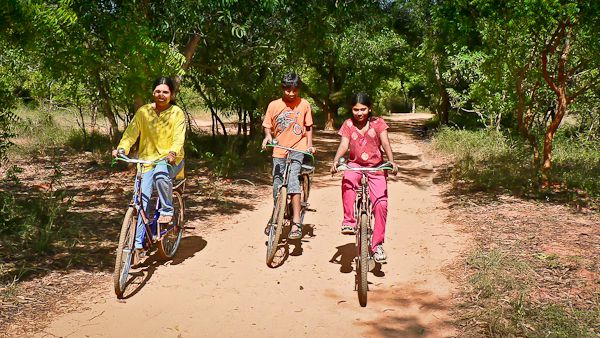 Auroville is trying to be free of car emissions with many residents switching to bicycles but also motorbikes. Photo by Pandiyan.

He liked the ideas of Sri Aurobindo and Mira Alfassa to shape a “conscious” community in which people in all stages of life viewed themselves as students and teachers. “I was looking for my purpose in life and was sure that it was higher than just how it related to my life.” For him, it was a big challenge to work on Auroville’s further city planning concept and at the same time experience first hand the dynamics of a collective community life.

When Dutch national Jos van den Akker came to Auroville in 2001, the place was considered a pioneer in the use of solar energy and ecologically-friendly construction. At the time, van den Akker himself was working in the field and he thought it logical to stay on. But it wasn’t just solar energy that drew him. Living in a community, sharing things and constantly engaging with the people you live together was what proved the trigger.

“Perhaps it had to do with the fact that I’m single — I have no family and that’s why I like living in other communities.” 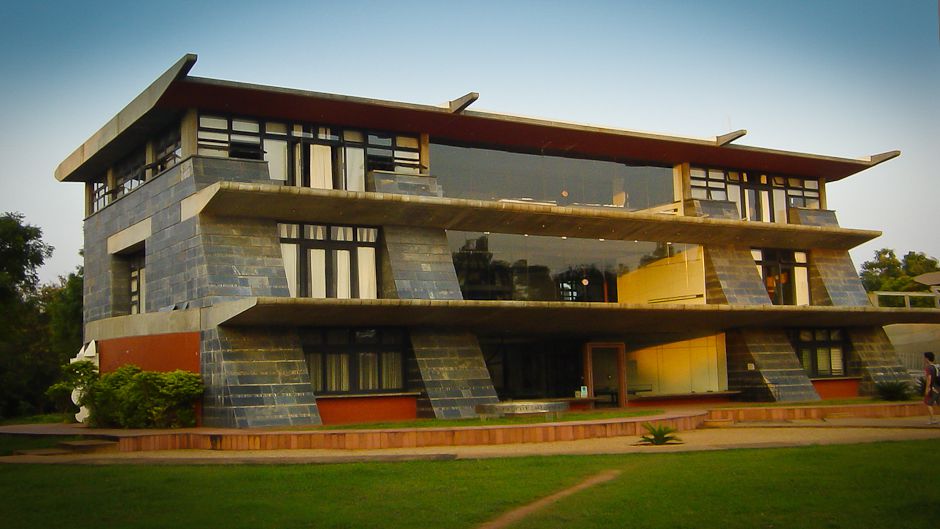 Auroville’s town hall was financed by funds from the European Union. Photo by Benjamin Chun.

But it’s not always an easy thing to do since all residents have to take decisions together in a consensus in a general assembly. There is no president or member. “If something has to be decided, all have to agree. That’s simply not realistic. Someone is always against it and blocks the decision,” van den Akker says, adding that it’s ineffective and finally few things are ever decided.

It’s a view echoed by Lalit Bhati. “Yes, the decision processes are slow,” Bhati says. “That can at times be really frustrating.” However, about six to seven years ago, residents did set up neighborhood committees that deal with smaller problems such as tensions between inhabitants. “Even utopia isn’t free of problems,” Bhati says. Auroville is finally a “living laboratory,” he says, just as Alfassa had once expressed. A place in which people are exposed to evolution just as they are in the rest of the world. This process is by no means over and will probably never be, he adds.

“Auroville is unique,” political scientist Karen Litfin from the University of Washington who’s currently writing a book on so-called ‘ecological villages’. There are several thousand of them all over the world. But, Auroville, she says is more than just an eco township though it belongs to the Global Eco-village Network. “Above all, Auroville is a spiritual community and the environmental activities are a result of the teachings of Sri Aurobindo,” Litfin says.

But an utopia — in the sense of a perfect place — is not what Auroville is, Litfin argues. “But it’s striving to be that, to be the best place that can advance humankind — and humans, after all, aren’t perfect.”