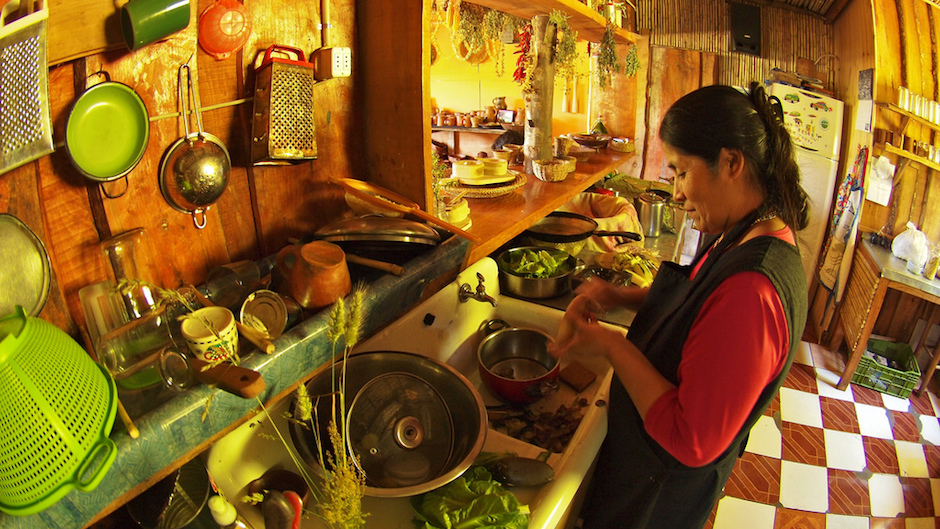 Plato wrote the familiar phrase: “a true creator is necessity, which is the mother of invention.” Maybe it is not surprising, then, that the most novel proposals for how to solve the current crisis and all the damage it has wrought on people and the planet aren’t coming from Wall Street or the World Bank; they’re coming from the places that have suffered the most at the hands of the economic downturn, the tsunamis and other natural disasters, the loss of farmland to drought and industrial farming, and the gobbling up of forests and natural resources by corporations.

At a recent series of events organized by Focus on the Global South, Lilak, and other allies in the Philippines, indigenous leaders and representatives of different social movements and sectors met to debate an idea they call “vivir bien“. It is a Spanish phrase meaning “to live well” that is understood to many native communities in Latin America — where the terms are actually sumac kawsay, suma qamaña, and ñandereko. The Kichwa leader from Ecuador Blanca Chancoso shared her take on this philosophy with delegates from the Philippines, India and Thailand. Most of them could think of a phrase in their own mother tongue that encapsulated the same values of social peace and harmony and balance between human beings and nature that Chancoso described.

She explained: “We say that living well isn’t just about having a computer or two televisions at home… living well is having at least the right to smile, with health, with food, with enough space so that we don’t have to think about sacrificing others so that someone else can live better, but rather, that we may all live well.”

And while the various similar indigenous concepts we discussed are centuries old, they are not relegated to the past. “Vivir bien” is a living philosophy, something that indigenous and non-indigenous scholars continue to develop, and something certain governments, like those of Ecuador and Bolivia, have begun to take seriously and put into their constitutions in reference to indigenous rights and pluri-cultural values.

That said, many at the conference warned of the danger of using “vivir bien” to romanticize indigenous groups or co-opt their political struggles. They noted the contradictions between “vivir bien” the extractive industries actively promoted by Ecuador, Bolivia and other states.

What is “vivir bien,” and why is it relevant now? First and foremost, it provides a powerful counter-argument to the capitalist model of development that has become so accepted that it can seem like the only path. Capitalism is a system that pursues endless economic growth, where business owners generate profits to reinvest to gain more profits. When things get hairy, capitalism delves further into the exploitation of resources and laborers or, increasingly, it creates fictitious value (as in futures trading).

The reality is of course that economies can’t grow endlessly, and the notion of “vivir bien” acknowledges this fact. It takes a holistic view, where the wellbeing of one household or one individual is connected to the wellbeing of others. Nobody can “win” at living well, because it’s about living in harmony with other people and the natural surroundings for shared survival and satisfaction.

Once we start to look closely at the meaning of “vivir bien,” it becomes quite clear that capitalism is by nature unsustainable. There is no real “green” way of going about capitalism when the engine of development demands more grist for its mill each year. And yet the system has become so ubiquitous that it has permeated and controlled even our food systems — what we should eat, how food is produced and distributed.

In Thailand, for example, the corporation C.P. Foods has in the last 15 years opened about 6,500 7-Eleven stores (roughly one for every 10,000 citizens), where their slogan roughly translates to “Think of us when you are hungry”. And, increasingly, people do, choosing packaged foods over natural foods and opting for the microwave instead of the local market. This scenario contributes to the decline of small farming, which was once a backbone of the economy.

We think of “vivir bien” as something opposed to capitalism, but in fact, it goes beyond other “-isms,” too. That includes socialism, a system that can also treat nature as merely a source of raw materials without its own inherent value.

A key part of “vivir bien” has to do with redistributing resources to promote equality. Not just resources like money or food, but the sources of wealth, like land and technology. There are many indications that the gap between the rich and the poor is widening, but few solutions are being offered.

To really “live well,” people need decent employment, a living wage, freedom from violence, social protections like proper healthcare systems and access to essential services like water and sanitation. For does one person really “succeed” if their lifestyle causes others to suffer?

The indigenous leaders, members of women’s organizations, trade unionists and other delegates at the conference talked about “vivir bien” in a very practical way. Not as a wholesale rejection of current levels of industrialization, or of modernization in itself, but to highlight the limits to growth and contradictions of the current system. They suggested that there are ways to move toward achieving social harmony and restoring the balance in the Earth’s natural cycles. They talked about building up local economies and systems of exchange, about promoting employment outside of predatory industries in areas like restoring polluted ecosystems, recycling and renewable energy.

Some unanswered questions remained after the discussions, for example on the issues of whether “vivir bien” provides insights into how to pursue redistribution at the global level, or how it can be used in alliance building and campaigns to challenge the capitalist order. Participants expressed a desire to keep exploring the issues.

These kinds of conversations between indigenous representatives and other sectors in Latin America and Asia are becoming more common, and they suggest that the time has come for us to seize on alternatives to capitalism to help solve the climate crisis while we still can.

Boaventura de Souza Santos, a Brazilian scholar who was one of the organizers of the World Social Forum once described “vivir bien” in an interview, saying: “This is new, it cannot be expressed in English or Spanish or Portuguese or French in adequate terms, because it comes from a non-colonial language. And the Global North is going to hear about this… sooner or later, they will acknowledge there are different ways of seeing the future, in non-developmental ways, not in quantitative ways, but other ways of caring for life, human life and all life on the planet.”

That is certainly our hope.

Indigenous Ideas about “Living Well” Can Help Heal the Planet by Megan Morrissey is licensed under a Creative Commons Attribution-NonCommercial-NoDerivatives 4.0 International License.
Permissions beyond the scope of this license may be available at http://focusweb.org.

Megan Morrissey is the communications officer at Focus, repsonsible for online, media relations, and editorial tasks. Her experience includes working as a communications advisor at the Embassy of Venezuela to the United States and at the Mission of Bolivia to the United Nations. Megan has a Bachelor’s degree from McGill University in anthropology and Latin American studies and a Master’s from Georgetown University’s School of Foreign Service.