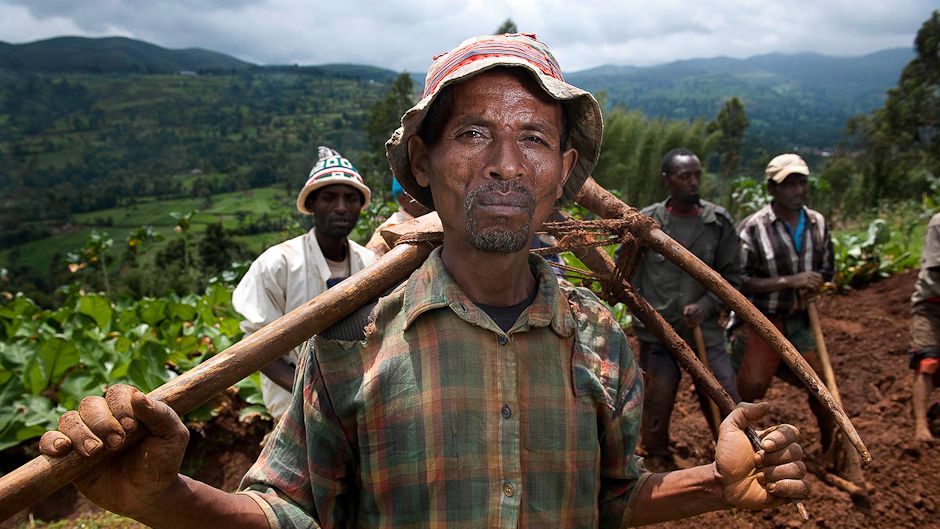 While international communities discuss and predict the potential impacts of climate change on the world at large — sea-level rise, coastal erosion, more intense storms, increasing avalanches and landslides, for example — these effects are already a grim reality for indigenous peoples and local communities around the world.

But they are not just sitting back and waiting while governments debate possibilities and promises. Indigenous peoples are at the vanguard of climate change and are actively using their traditional knowledge and survival skills to test adaptive responses to climate change.

Climate change is not new

There is nothing new about the challenge of living with a variable and changing climate. Indigenous peoples have millennia of experience in collecting and applying local environmental information to help their communities plan for, and better manage, the risks and impacts of the natural variability and extremes of climate.

What is new is the threat of human-induced climate change, and the need to adapt to its adverse effects. This type of change is much faster, results in broader climate variability, and is being accompanied by a rise in global mean temperature due to heat being trapped by increasing atmospheric greenhouse-gas concentrations.

The value of traditional wisdom

As a result of their close relationship with the land, indigenous peoples have been observing and reporting the impacts of global warming for several decades, and are ahead of the game in coming up with solutions to cope with and adapt to these changes.

Integrated agricultural systems based on indigenous knowledge and traditional practice provide many examples of sustainable and adaptive systems with potential to survive and mitigate major climactic change. Indigenous peoples in Guyana, for example, are moving from their savannah homes to forest areas during droughts and have started planting cassava on moist floodplains too wet for other crops.

In the context of climate change research, indigenous communities are proving an important source of climate history and baseline data and local scale expertise. There is a growing recognition that indigenous traditional knowledge offers information and insight that complements conventional science and environmental observations, as well providing a holistic understanding of environment, natural resources and culture.

The integration of both traditional wisdom and new technologies to adapt to climate change impacts offers a path to new partnerships and innovative ways of thinking.

Examples range from the incorporation of ‘hard’ forms of technology into traditional activities — such as the use of GPS systems by Inuit to capture information from hunters, which are then combined with scientific measurements to create maps for use by the community — to the integration of indigenous knowledge when predicting the impact of climate change on biodiversity. One example of the latter is how, in Papua New Guinea, Hewa knowledge of birds that would not tolerate habitat alteration or shortened fallow cycles was recorded in a way that is useful for conservation purposes.

Because indigenous peoples are often overwhelmingly dependent on the environment for daily living, their communities are among those most adversely affected by climate changes. On the flip side, indigenous communities usually have remarkable adaptive capacities to survive in inhospitable environments and difficult circumstances. Indigenous adaptive strategies in the agriculture sector typically take advantage of traditional knowledge held by the community to reintroduce indigenous agricultural techniques that may have fallen out of favour, and promote sustainable natural resources management practices.

Farmers in the dry tropics are particularly vulnerable since they not only produce food under very harsh conditions, but also make a living out of farming. Traditional pastoral systems preserve natural ecosystems through extensive ranching and rotational grazing and by using a variety of livestock. The Maasai, for example, distinguish between those plants that are good for increasing milk and those that fatten livestock and improve their condition. This knowledge is particularly important during exceptionally dry years when the Maasai must make decisions about where to graze, which grasses recover faster than others and, based on the availability of resources, what stock should be culled first.

The double-edged sword of carbon trading

Market-based mitigation measures such as carbon emissions trading are an issue that continues to be debated in the international community. However, there is a risk that these measures will be implemented in a manner that violates the rights of indigenous peoples.

Certain Clean Development Mechanism and Reducing Emissions from Deforestation and Forest Degradation projects have seriously threatened indigenous peoples who refused to hand over their territories for the purpose specified in the projects. Others have suffered when, for example, hydro-power plants have flooded their lands (Burma and Thailand), geothermal plants have displaced their sacred sites (Philippines) or nuclear power plants affected their health (North America).

On the other hand, some indigenous communities see economic benefits from taking part in carbon trading projects, especially when they have already developed, over thousands of years, sustainable neutral and carbon negative livelihoods.

Several indigenous communities have actively participated in setting up schemes to benefit from payment for ecosystem services and carbon trading regimes. As an example, in 2007 oil company ConocoPhillips agreed to pay a group of indigenous peoples in northern Australia AUD $1 million a year for 17 years, to offset 100,000 tons of the refinery’s greenhouse emissions. The group will use traditional fire management practices (for details see the Fighting carbon with fire videobrief) that have been scientifically shown to reduce greenhouse emissions as compared to naturally occurring wildfires.

Make no mistake. Despite having the smallest carbon footprints in the world, indigenous peoples are extremely hard hit by climate change. Early effects already being experienced are severe and include land and natural resource degradation; impacts on food security and food sovereignty; health issues; cultural and spiritual impacts; demographic changes (including displacement from their traditional lands and territories); economic impacts and loss of livelihoods; water shortages; and loss of traditional knowledge.

But in spite of these impacts, indigenous communities are willing and able to share with the rest of the world the lessons they are learning from the successful adaptive and mitigation strategies as they trial them. The majority of these efforts are based in some way on their traditional ecological knowledge, whether they involve modifying existing practices or restructuring their relationships with the environment.

Benefiting from the knowledge base

Effective adaptation planning relies on the best available knowledge base, and the urgent need to respond to the pressures of climate change has put a premium on the generation, interpretation and use of information in this regard.

The United Nations University’s Traditional Knowledge Initiative has produced a compendium with a wide-ranging overview of more than 400 projects. Advance Guard: Climate Change Impacts, Adaptation, Mitigation and Indigenous Peoples contains over 400 case studies and research activities specifically related to climate change and indigenous peoples. It provides a sketch of the climate and environmental changes, local observations and impacts being felt by communities in different regions, and outlines various adaptation and mitigation strategies that are currently being implemented.

The final version of the publication will be released in January 2010, but an advance reading copy is being made available here (please see the “Download the paper” box in the right hand colomn of this page). All of the examples in this article are discussed in further detail and referenced in the compendium.

Comments and suggestions welcomed by 15 December for incorporation into final publication to tki@ias.unu.edu. Final publication will be available in January 2010 on the UNU Institute of Advanced Studies website.

Indigenous Innovation at Vanguard of Climate Change by Kirsty Galloway McLean is licensed under a Creative Commons Attribution-NonCommercial-ShareAlike 3.0 Unported License.

Kirsty Galloway McLean is an Adjunct Fellow at the UNU Institute of Advanced Studies where she is working on climate change and traditional knowledge, and the Principal of the environment information consulting company BioChimera. She holds degrees in science (biochemistry and molecular biology) and arts (cognitive studies) from the Australian National University, and has been working in international science policy for over 20 years.