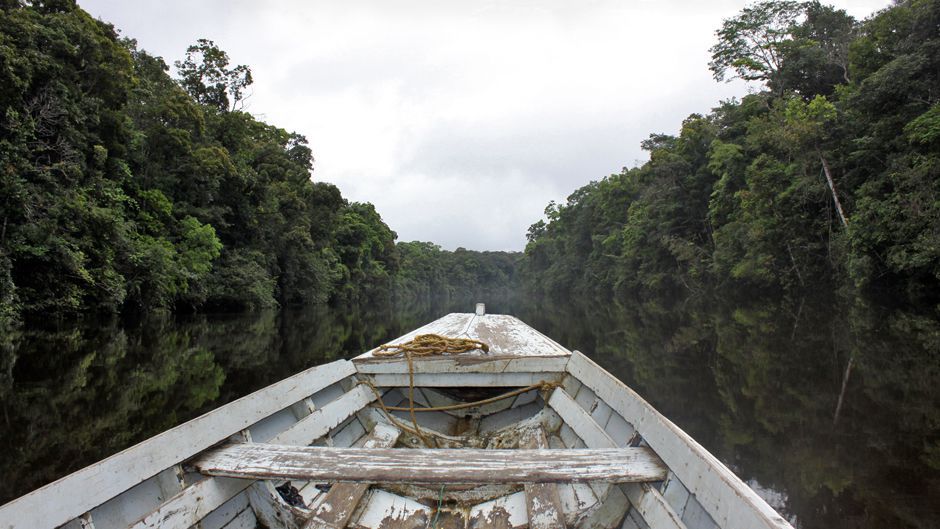 Indigenous people govern about half of all remaining undeveloped land on the planet. New research with indigenous people in the Amazon suggests they may outperform satellites in measuring the true carbon storage potential of the rainforest.

That finding could influence how indigenous people in Guyana and elsewhere manage their forests and may lead to greater opportunities for these communities to engage in carbon offset programs.

The project, described in the journal Forest Ecology and Management, grew out of efforts to engage indigenous peoples to gain better understanding of ecosystems that have been relatively undisturbed by modern civilization. 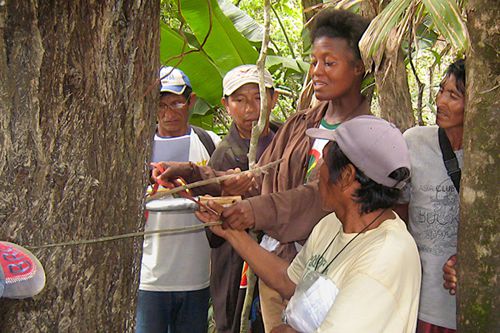 The late Kye Epps teaches Wapichana field researchers how to measure tree diameter, information that can then be used to calculate a tree’s biomass and carbon storage. Photo: Han Overman.

But, the first challenge was teaching people with little to no exposure to the outside world just what carbon is.

Coauthor Kimberly “Kye” Epps, a postdoctoral scholar at the Stanford University’s School of Earth Sciences (who passed away during the project), developed lesson plans to explain to the people of Guyana that all life is based on carbon, that the black charcoal from a burnt twig is primarily carbon, and how the carbon-laden smoke enters the atmosphere and ultimately affects the global climate. The plants and trees suck carbon from the atmosphere, she explained, and store it in their trunks and leaves.

“Kye’s innovative lessons helped get them to where they not only understand what carbon is, but also understand its global implications and how much they actually hold themselves on their land,” says senior author Jose Fragoso, a senior scientist in the biology department at Stanford. “When they realized its importance, they became very invested in the work.”

Next came lessons on establishing survey plots, cataloging plant species, and learning how to measure plant trunk circumferences, which is a standard measurement used to calculate biomass and thus how much carbon is contained in the plot.

“The people know the trails really well, and some of them will walk two days to get to their plot and make measurements,” Fragoso says. “They can make really good measurements in really isolated areas, where government workers would never get to. Generally, professional scientists will not travel these distances on foot to verify carbon estimates.”

While satellite observations would most likely identify each of these plots as “forest” and assigned them a standardized value for carbon storage, the field workers identified 11 habitat types with trees, each of which requires a different set of calculations for determining its carbon storage potential.

Because they could be more specific about the biomass of each vegetation type making up a plot, they were able to calculate that forests in Guyana contain 20 to 40 percent more carbon than previously estimated. The difference can affect a number of different areas.

For one, it means that climate models that include blanket estimations of carbon storage in lands governed by indigenous people might be missing significant data.

These areas probably play a much larger role in the global climate than previously assumed, Fragoso says, and indigenous people need to be better represented at global climate talks. These land-owners have more carbon storage at their disposal to sell as carbon credits to governments and corporations looking to offset their greenhouse gas-producing activities.

“Having a good measurement of carbon storage really helps them to enter into discussions with the national government and surrounding communities,” Fragoso says. “This helps them to both prevent global climate change while also benefiting, and that is something that the people we worked with were very interested in.”

This is the first model for turning indigenous people into field researchers capable of producing scientifically rigorous calculations for carbon, says Fragoso, who is now planning to share the concept with other indigenous nations around the world.