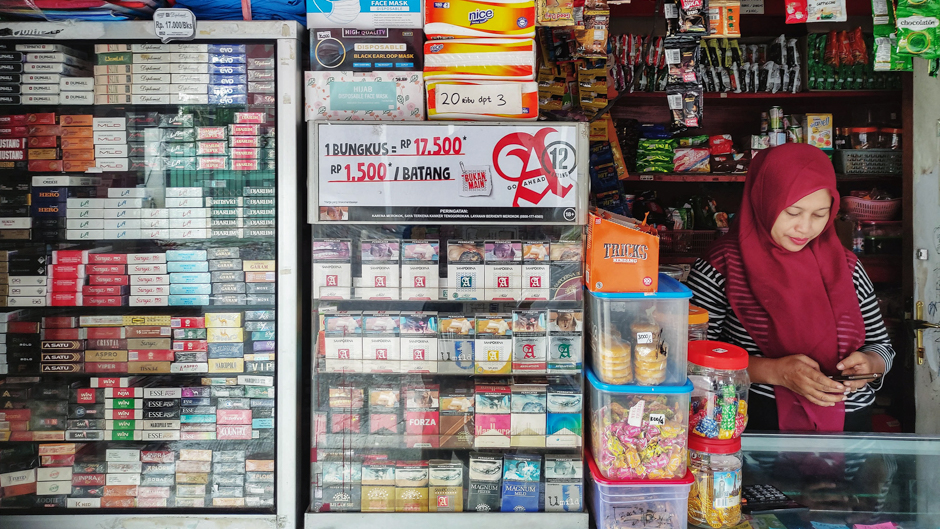 Indonesia has been described as “Disneyland” for the tobacco industry. Lax regulation has led to some of the highest smoking rates in the world, children and young people are blatantly targeted. Now, a new youth advocacy coalition is working to stop the industry’s free ride.

Images of chain-smoking Indonesian toddler Aldi Suganda flashed around the world in 2011, and the situation is just as disturbing today: 19 percent of Indonesia’s 13- to 15-year-olds (most of them boys) are tobacco consumers – compared to 7 percent of that age group globally. Three quarters of Indonesian children see tobacco advertising and nearly two thirds are exposed to second-hand smoke.

Although the sale of tobacco products is prohibited at educational facilities by law, many schools are geographically surrounded by tobacco retailers with outdoor advertisements. Single cigarette sticks can also easily — and cheaply — be bought at these shops. Most retailers do not refuse to sell cigarettes to adolescents. Worse still, Indonesian tobacco plantations profit from child labour and expose their young workers to hazardous chemicals, dangerous conditions and financial exploitation.

It is no coincidence Indonesia is among only nine countries not party to the World Health Organization’s Framework Convention on Tobacco Control (FCTC). It is the only Southeast Asian country not to have signed. Against the might of the tobacco industry’s resources, the Indonesian government has struggled to overcome political barriers and sign the FCTC or ratify stronger tobacco-control policies.

Tobacco companies have used strategy for political gains such as forming lobbying alliances and legally countering public health regulations using trade laws and international agreements. They use deceptive corporate social responsibility (CSR) narratives to claim they have made social and economic contributions, and the government has given them multiple CSR awards. This ‘CSR-washing’ strategy seeks to deflect public attention from the industry’s negative impacts, portraying Big Tobacco as supporting education for children and preventing child labour.

Since 2010, young advocates in Indonesia have pushed for at least four of the six measures in the WHO’s MPower framework for reducing tobacco demand.

Young people can wait no longer. The Indonesian Youth Coalition for Tobacco Control (IYCTC) is campaigning for change. Formed in 2021 when more than 43 organisations and communities came together, the IYCTC has documented promising practices in tobacco-control advocacy by various youth movements. Young advocates have held public demonstrations against international tobacco-sponsored events and pro-tobacco regulations. They have organised seminars, mass social gatherings, and public campaigns for FCTC ratification. They have also pushed for tobacco advertisements to be fully banned and for the Supreme Court to review an Indonesian Broadcasting Bill that has loopholes that the  industry exploits to advertise during television broadcasts.

Since 2010, young advocates in Indonesia have pushed for at least four of the six measures in the WHO’s MPower framework for reducing tobacco demand. They have called for protections from tobacco smoke; warnings about the dangers of tobacco; bans on tobacco advertising, promotion and sponsorship; and increased taxes on tobacco products. They have also conducted multiple studies to strengthen evidence-based advocacy efforts against the tobacco industry’s CSR-washing, especially those targeting children.

Young people are at the centre of the tobacco-use issue. They are targeted and harmed by the industry, and they are important actors in demanding and driving change. Globally, tobacco control policies and programmes targeting young people have been proven cost-effective. Moreover, empowering youth advocates and strengthening youth-led initiatives are crucial in the fight against tobacco use.

Wider support from the public and policymakers would help young people to offer their maximum contribution while having their rights protected, their voices heard and their safety guaranteed.

This article was originally published under a Creative Commons Attribution 4.0 International license by 360info.

Putri Widi Saraswati (she/they) is an Indonesian public health professional and medical doctor. She is currently working as a research intern at the United Nations University International Institute for Global Health.