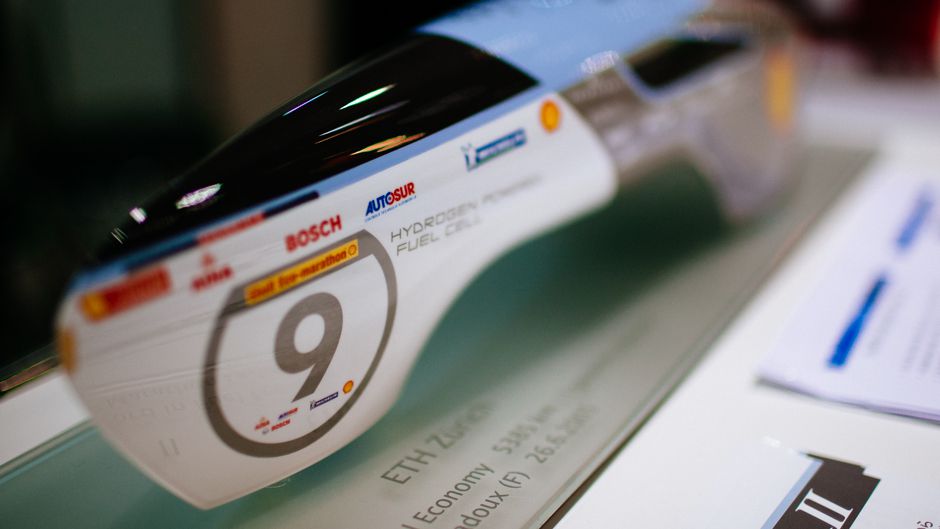 The recent moves by the Obama administration to raise fuel efficiency for cars are an important step in the right direction. How about taking a gigantic leap?

Most people would probably shake their heads and warn, “Don’t push your luck.” While others might say: “Great idea! I wonder how far I can take this?”

The latter attitude is the type that led students and professors at the Swiss Federal Institute for Technology (known as ETH) in Zurich to develop the most fuel-efficient car in the world, known as the PAC-Car II.

Our World 2.0 came across this marvel in February at the 5th International Hydrogen and Fuel Cell Expo in Tokyo (which returns in 2010). On the crowded expo floor, where over 500 exhibitors and 63,000 attendees swarmed, we managed to find our way to the booth showcasing the PAC-Car II.

We were intrigued by a large poster that boasted: “World Record in Fuel Efficiency”. Our curiosity led us to discover that the car, on the hydrogen equivalent of 1 liter of gasoline, covered an astounding distance of 5,385 km. That landmark was achieved back in 2005, when the car won the Shell Eco-Marathon and was recognized by the Guinness Book of Records.

On the Cutting Edge

We decided to dig a little deeper and found out that the whole story began in 2002 when students and professors at ETH learned about the eco-marathon — a challenge to students from around the world to design, build and test vehicles that travel further using less energy.

The ETH team decided that participating would be a true test. But they set themselves an even greater goal — they would introduce the first ever hydrogen-powered car to the competition, with the aim of showing that this cutting edge technology had “reached the needed maturity to power a car in a safe, compact, very efficient and clean way.”

Using PowerPac, a fuel-cell system developed in conjunction with Paul Scherrer Institut, the PAC-Car I was ready in time to compete in the 2003 eco-marathon, where it covered a distance equivalent to 1,701 km/l of petrol.

By the time the May 2005 eco-marathon came around, the car had been completely redesigned and was able to cover almost double the distance.

Project director Professor Lino Guzzella remarked that both PAC-Cars have “probed the actual fuel economy limits of road vehicles,” and that he is convinced that “some of the ideas that have been generated in this project will eventually show up on the road.”

To make sure that this happens, his team has put together a 339-page book that summarizes the vehicle’s design and construction issues.

We caught up with Prof. Guzzella via e-mail to ask a few questions. It is clear that the PAC-Car II shows that the fuel cell technology used is now mature, but we wanted to know his views on the potential for a bigger shift in society from fossil fuels to hydrogen, and how to speed up this transition.

“One major problem is the production of hydrogen,” said Prof. Guzzella. “Unfortunately, so far, all attempts to produce hydrogen have been hampered by high cost and low efficiency.”

“I believe that the next hurdle to be taken is here: a low-cost and efficient form of hydrogen production. Other problems are system cost and reliability, but here progress is visible.”

A central part of the PAC-Car II has been the sharing of the knowledge gained, and certainly the book helps to do this. However, we wondered whether the team had already witnessed the influence of this project in relation to the commercial sector.

“The distance between PAC-Car II and the regular car on the street is huge, and it will take some time to bridge that gap,” replied Prof. Guzzella.

“However, the most important contribution we made with the project is the many (several dozens) of students who have been involved in the project in some aspect, and who have learned how to design more fuel efficient cars. These students are now out in industry and at work on similar problems.”

Optimistically, the team has not been content to rest on their success to date, but has tried to build on these achievements.

“The number of students entering our department has been constantly increasing over the last five years,” said Prof. Guzzella. “I attribute that growth to projects such as PAC-Car II and others made by my colleagues here at ETH.”

“These projects have been used to showcase our work and they have kindled a desire for knowledge and innovation among young high-school students such that they chose to be part of that quest for a more sustainable energy supply in the future.”

One of the most influential lessons that Prof. Guzzella and his team learned from this experience was the power of innovation to motivate and inspire. “The most important thing was the fun we had doing that project,” reflected Prof. Guzzella.

Another crucial lesson is that carefully targeted public investment in frontier technologies spearheaded by innovative people can truly make a difference. The Swiss Department of Energy’s financial support to the project is evidence that societies can benefit if governments are prepared to open their minds and their checkbooks.

For the ETH team, the good work does not stop here. There are always new challenges. How about storing energy with compressed air, rather than batteries, as a way to cut costs for hybrid vehicles? That is an exciting idea.

Seems it is not just an idea. Prof. Guzzella and his colleagues are already working on it.

So pay attention car makers and governments everywhere. The future is coming fast, if you are willing to take the leap, that is.

Intelligence to Fuel Cars of the Future by Brendan Barrett is licensed under a Creative Commons Attribution-NonCommercial-ShareAlike 3.0 Unported License.