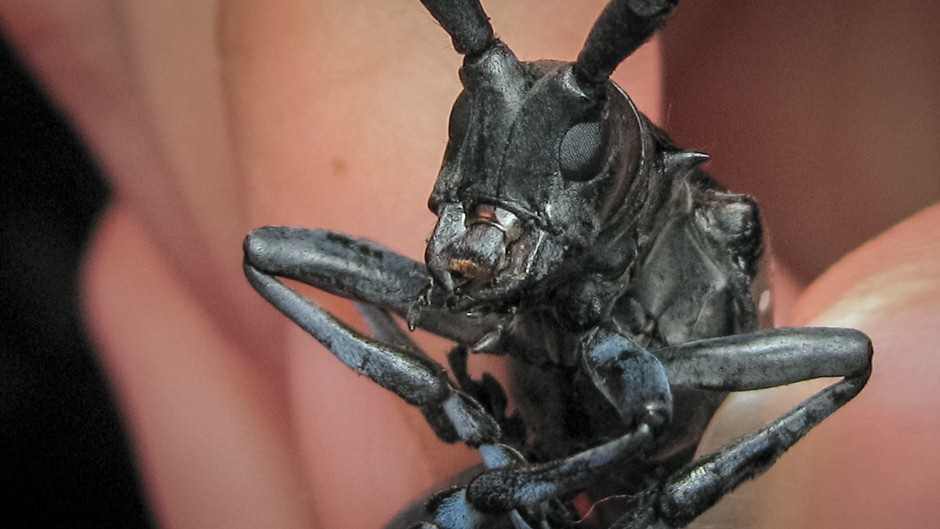 In this International Year of Biodiversity, the myriad forms of life on our planet have far too many things to fear.

The list includes emerging wildlife diseases (such as avian flu), climate change, the increasing harvest of natural resources by local communities, and the expansion of extractive industries.

But near the top of the threat list is another type of beast that tends to rage into new territories, strangling or devouring other life forms in its path. Invasive alien species are those that find their way into foreign ecosystems and decrease the abundance and richness of native species via competition, predation, hybridization and indirect effects. The invaders change community structure and alter genetic diversity for the worse.

Ranging from disease and plants, to rats, cats, fish and goats, these havoc-causers are not just threatening a growing number of other species over wider areas, but are sounding a loud ‘Code Red’ for some already in danger of extinction.

At this crucial juncture, a new report has been released by scientists from the Centre for Invasion Biology, BirdLife International and the International Union for Conservation of Nature (IUCN),  entitled Global indicators of biological invasion: species numbers, biodiversity impact and policy responses.

In it, the authors remind us that the Convention on Biological Diversity’s (CBD) 2010 Biodiversity Target is “to achieve by 2010 a significant reduction in the current rate of biodiversity loss at the global, regional and national level, as a contribution to poverty alleviation and to the benefit of all life on Earth”.

But only nine of the 22 biodiversity indicators within the CBD framework are currently considered to be fully developed, the study states. Furthermore, the goals designed to reduce species threatened by invasive aliens has not been achieved.

This failure is partly due to a lack of standardised data, which is why the contributing partners are publicly sharing the study’s data through the IUCN’s Red List of Threatened Species (see graphic) and via the Global Invasive Species Programme website.  The report encourages “the scientific community and others to contribute information to these datasets to keep the indicators up to date and as accurate as possible.”

The report concludes that its findings offer the evidence and insight for plotting a way forward, and advocates better work in the near future.

The study looked at 57 countries and found that there are an average of 50 non-indigenous species negatively impacting the biodiversity of each country. The number of invasive species ranged from nine in Equatorial Guinea to 222 in New Zealand.

In total, 542 species were documented as encroaching on environments that were not their own, including 316 plants, 101 marine organisms, 44 freshwater fish, 43 mammal, 23 bird and 15 amphibian species.

According to Professor Melodie McGeoch, the report’s lead author, these numbers are underestimated since “regions with low development status and little investment in research have lower than expected numbers of invasive aliens”.

Here are just a few examples of what species are being wiped out, by who, and where:

The report attributes the expansion of the problem to a substantial rise in international trade over the past 25 years. However, the authors also note that while most countries have made international commitments to tackle the threat, only half have introduced appropriate legislation and even fewer are taking enough on-the-ground action.

Another of the study’s authors, Dr. Stuart Butchart from BirdLife International, points out that there has been some progress improving the status of some threatened species on the IUCN Red List, but he cautions against complacency.

“This [report] shows that although we are winning some battles in the fight against invasive species, current evidence suggests that we are losing the war.”

[quote quote=”The 2009 annual update of the IUCN’s Red List of Threatened Species brought it to an all-time high of 17,291 lifeforms threatened with extinction.” ]

Indeed, at a time when the planet is experiencing a mind-boggling rate of species extinction (around 30,000 species per year — which breaks down to an even scarier statistic of more than three species per hour) every single loss is alarming. Or at least should be.

“Our planet may be going through its sixth great extinction event, but you would not know it to read today’s headlines,” the UK environment secretary said Monday as he announced plans to call on world leaders to adopt biodiversity pricing, as suggested by biologist Dr. Gretchen Daily here on Our World 2.0 last week.

Polishing off the invaders

Though the problem is very serious, with adequate international action (be it monetary or legislative, or optimally both) invasive alien species can be successfully controlled.

The Black-vented Shearwater, a seabird native to Natividad Island off the coast of Mexico, was under threat from cats, goats and sheep. But these non-native predators have been eliminated and the status of the bird dropped from Vulnerable to Near Threatened on the IUCN Red List. Similarly, the Red Fox population in south-western Australia has been controlled over the last decade, allowing the Western Brush Wallaby to recover enough to be downlisted to the status of Least Concern.

“It’s likely to be more cost effective to prevent the spread of invasive species in the first place than to tackle the biodiversity crisis once they have become established,” says Dr. Bill Jackson, IUCN’s Deputy Director General and Chairman of GISP.

“With sufficient funds and political will, invasive species can be controlled or eradicated. This will allow native species to be saved from extinction, but countries need to dramatically improve the way they deal with the problem.”

On a lighter note, Our World 2.0 likes an innovative grass-roots idea circulating on the internet of late that addresses both the biodiversity and food security issues at the same time.

It seems Louisiana’s Department of Wildlife and Fisheries and some Cajun chefs have launched a campaign promoting the eating of silver carp, a fish originally from Asia. Rebranded “silver-fin” by the campaign, these carp can weigh up to 23 kilos (50 pounds) and are a menace well-known in the United States due to their headline-catching propensity for leaping several feet out of the water. Sometimes they even jump into boats and injure boaters.

Both silver and bighead carp threaten Louisiana’s native freshwater species that also feed on plankton, as they do. Asian carp were introduced to the US in the 1970s to help manage aquaculture ponds and wastewater lagoons. But as wild creatures are inclined to do, they soon escaped, eventually spreading into Louisiana waters and are now commonly found in the Mississippi, Red and Ouachita rivers and the Atchafalaya basin.

Inspired by the Louisiana campaign, a popular US outdoors magazine asked its readers what other invasive species they might be tempted to savour, and what their recipe would be.

After all, is it not only fair that to help beat ‘em, people should feel free to eat ‘em? Check out your country in the Global Invasive Species Database and let the menu-planning begin. What invaders of your local area look tasty to you?