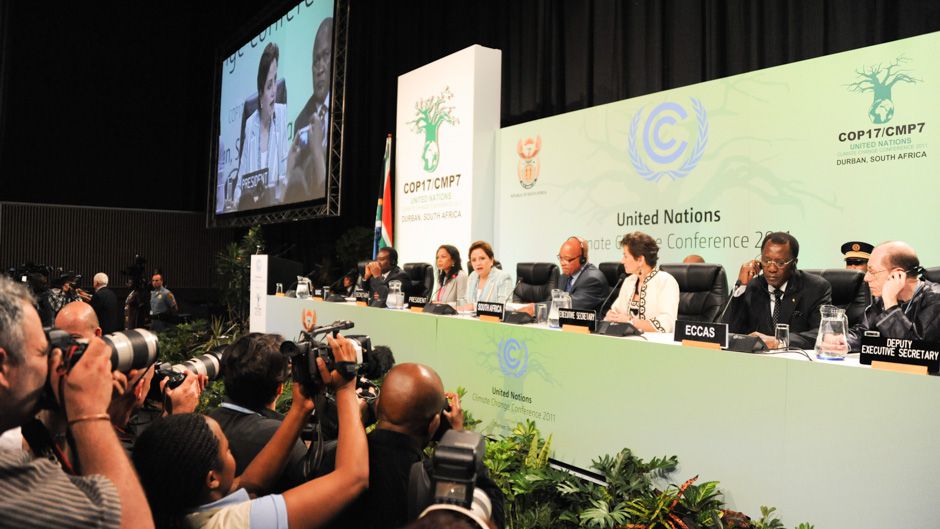 The recent United Nations climate change conference in Durban — described by the New York Times newspaper as “the 17th in a series of habitually quarrelsome and mostly unproductive gatherings since the same countries met in 1992 in Rio de Janeiro” — predictably did not achieve many results.

One important part of this year’s conference was the the Green Climate Fund that was agreed to at the Copenhagen summit in 2009, and which is intended to provide US$100 billion a year in public and private financing by 2020 to assist the world’s poorest countries in mitigating and adapting to the environmental threats posed by climate change.

Although there are still a number of important unresolved issues including its legal status and relationship to the UN Framework Convention on Climate Change (UNFCCC), decisions taken on the fund in Durban could be seen as a hopeful step forward.

Of course, this is not the first time a UN sponsored international environmental conference ended with promises of future money and technology for the developing world.

More than two decades ago in 1989, the UN General Assembly declared the importance of identifying “ways and means of providing new and additional financial resources, particularly to developing countries, for environmentally sound development programmes”. Three years later, the UN estimated the overall cost of implementing the ensuing Agenda 21 plan in the developing world was to have been around “$600 billion, including about $125 billion on grant or concessional terms from the international community”.

It is unclear how much of the promised $600 billion has been transferred to the developing world but it is worth noting that the UN request to the wealthy Organization for Economic Cooperation and Development (OECD) countries to contribute 0.7 percent of GDP to development assistance has been consistently ignored.

Sadly, compared to past international environmental conferences, the chances of raising the necessary and promised Green Climate Fund money are severely constrained by the rapidly deteriorating geo-political context in which the usual sustainability leaders like the European Union (EU) that champion big global initiatives like Agenda 21 and can be counted upon to lobby the typically reluctant United States are being severely hobbled by their own persistent domestic and regional problems.

The entire question of whether the EU will continue in its current form is starting to be asked by a number of observers — an unthinkable scenario as recently as a couple of months ago.

While it is hard to be optimistic about the future of the UNFCCC, the Green Climate Fund can be a real opportunity to move forward on global climate governance and bring real economic and technological dividends to the developing world. Four critical issues and questions will determine whether this opportunity will be realized.

First, can the Green Climate Fund help the most vulnerable population in the developing world adapt and help manage the diverse risks associated with climate change?

Whereas there are more than two dozen developing countries with economies that are expanding rapidly enough to reduce poverty quickly, thirty-five developing countries with a combined population of nearly a billion people (or what the Oxford economist Paul Collier refers to as the “bottom billion” are consistently lumped together at the bottom of the annual United Nations Human Development Report country index.

Second, can the Green Climate Fund be designed organizationally to reconcile the competing interests of the Fund’s many interest groups and stakeholders? Whenever billions in scarce investment capital is at stake there will be no shortage of stakeholders trying to shape the terrain of what constitutes the Fund’s “success”.

The Washington D.C.-based policy think tank, the Center for American Progress, has argued that the management of the Fund will need to have “independence from the UNFCCC bureaucracy to make the most cost-effective funding decisions” and need to be “performance-based and data-driven”.

While these are important recommendations, the more relevant question is how precisely to make that so? Should the Fund operate more like a typical investment fund with professional managers and analysts?

There is no doubt that some donor countries would prefer that model while many other countries, particularly those in the developing world, would see this as evidence that the wealthier countries (who will have to take the lead in providing the necessary investment capital) are more interested in placing unreasonable if not unnecessary conditions on fund disbursement.

In the case of the US, any tight linkages between the Green Climate Fund and UN bureaucracy will make it that much harder to mobilize the necessary domestic political support to financially support the Fund. Though similar anti-UN sentiments exist in the EU, it is nowhere as strong as in the US.

Role of the private sector

While we should continue to have debates on the legitimacy of something like the Keystone pipeline project, there is no question that some form of private sector financing will be needed to complement the existing national development assistance programmes as well as international environmental financial mechanisms like the Global Environment Facility.

In a recent working paper, Katherine Sierra, a Senior Fellow on Global Economy and Development at the Brookings Institution and former Vice-President of Sustainable Development at the World Bank, highlights the importance of using public funds to help transform the market conditions for private investments and to identify innovative mechanisms to attract private sector investors in climate change projects in the developing world. For instance, public funds can be used to reduce the overall cost of deploying clean technologies in the developing world and to lower the transaction costs to attract greater private capital to green infrastructure projects.

So the question is no longer if but how the private sector can be engaged as investors and partners in realizing the broader goals of the Green Climate Fund.

The fourth matter to consider is how effectively the Fund will be managed in terms of institutional transparency, accountability and impact.

Since 1960, wealthier countries in Western Europe, and North America and Japan have given out US$3.2 trillion in Official Development Assistance (ODA). ODA is now a $200 billion industry with $122 billion coming from the traditional wealthy OECD countries; $53 billion to $75 billion coming from private donors (e.g., foundations and private companies) and $14 billion annually coming from emerging economy donors including China, India, Brazil, Turkey and the Republic of Korea, among others.

According to one recent report by the International Institute for Environment and Development — which provides a scorecard of which countries are leaders or laggards in terms of providing new and additional funding as part of the 2010–12 “fast-start climate finance” program agreed upon in Copenhagen — even the highest ranked countries (Japan and Norway) need to go much further in terms of climate finance transparency.

Whether the Green Climate Fund eventually has the capacity to disburse $100 billion or some fraction of that amount, what is much more important is whether and how effectively the Fund can be managed in terms of institutional transparency, accountability, and impact.