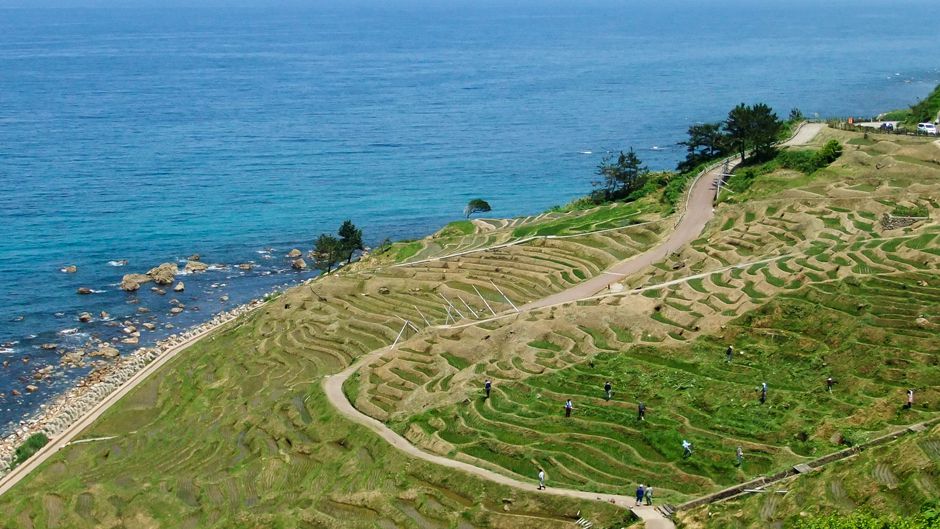 Today there is widespread awareness of the food challenges posed by a growing global population and exacerbated by ecological problems resulting from the industrialization of the world’s food system and the changing climate. But academics and policymakers are increasingly finding hope in local knowledge, looking to ingenious agricultural systems that reflect a profound relationship with nature and have played a role in the evolution of humankind.

For over a decade, one particular initiative has been building international will and capacity around the dynamic conservation and adaptive management of agricultural biodiversity and traditional knowledge systems throughout the world. Globally Important Agricultural Heritage Systems (GIAHS) is an initiative of the Food and Agriculture Organization of the United Nations (FAO) that aims to boost food and livelihood security and agri-“cultural” survival.

Since GIAHS was launched as a Global Environment Facility project in 2002, eight sites were designated as GIAHS, including the Ifugao Rice Terraces in the Philippines, the Hani Rice Terraces in China (previously featured on Our World 2.0), and Andean Agriculture in Peru.

Since 2009, there have also been strong calls — by the United Nations University (UNU); FAO; the Japanese Ministry of Agriculture, Forests and Fisheries (MAFF); and local stakeholders — to share good sustainable agriculture practices accumulated for centuries in developed countries. One such system that has been emerging in global discussions is that of the Japanese concept of satoyama. Satoyama is defined as human-influenced natural environments, such as farmlands and secondary forest, that people have developed and maintained sustainably over a long time and 20 % of Japan could be considered as satoyama.

Reflecting this mood for wider recognition of traditional practices all over the globe, satoyama gained international recognition at the 10th meeting of the Conference of the Parties to the Convention on Biological Diversity (COP10) held in Japan in 2010. At this summit, the International Partnership for the Satoyama Initiative was adopted in a decision on the Sustainable Use of Biodiversity.

In parallel, the idea emerged that Japan’s sustainable agriculture systems could be recognized as GIAHS. Thanks to the ground research conducted by UNU in partnership with the Hokuriku Regional Agricultural Administration Office of MAFF, in particular, and local governments, two Japanese candidate sites were identified for inclusion in the global list and were subsequently inscribed as GIAHS sites at the GIAHS International Forum in Beijing last month.

Sado Island (Niigata prefecture) and the Noto Peninsula (Ishikawa prefecture) were chosen as the first GIAHS designated sites from Japan (and from the developed world overall) because of their exemplification of satoyama and its accompanying benefits to enhance sustainable agriculture and agro-tourism effects.

Traversed by two mountain ranges with a broad plain in the middle, Sado Island — located off the shore of Niigata Prefecture — is characterized by a variety of landforms and altitudes that have been ingeniously harnessed since at least the Yayoi period 1,700 years ago. The satoyama landscapes on Sado Island hold a variety of well-regarded agricultural biodiversity grown in paddy and other fields — such as rice, beans, vegetables, potatoes, soba (buckwheat), and fruit — as well as livestock, wild plants and mushrooms in the forests, and diverse varieties of seafood in the coastal areas. 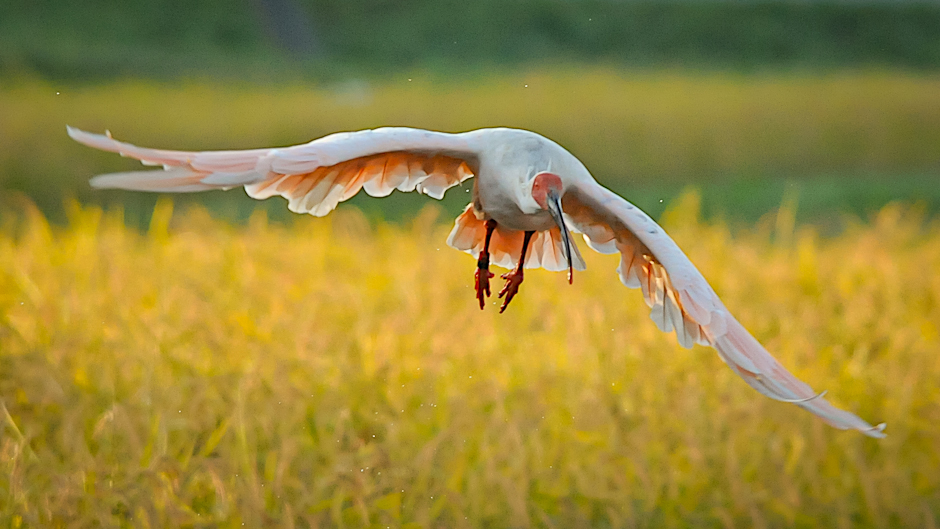 “Sado island is witnessing a revival of traditional practices over the past decade or so, catalyzed by its efforts to reintroduce the crested ibis into the wild.”

Sado’s recognition is in part due to this diversity of landscapes harnessed for production of varied agriculture products that have been produced and maintained by communities inhabiting the island over centuries.

For example, pressures on food production during the gold rush of the Edo period (1603-1868) led to the development of rice terraces on hill slopes, which contribute to the landscape’s aesthetic appeal, as well as to the feeding ground of Japanese crested ibis (Nipponia nippon). This adaptation allowed the satoyama on Sado to be the last habitat of the wild bird, culturally valued in Japan, that feeds on insects and worms in the paddy fields and roosts on the tall trees.

However, arguably due to human activities, including the use of agro-chemicals in farming, the number nonetheless began decreasing drastically in the late 1950s and reached just 5 in 1981.  These were captured and placed in the Sado Japanese Crested Ibis Conservation Center to begin a captive breeding program. Though the last of Sado’s wild birds died in 2003, the Center has to-date bred 139 ibis and released 60 ibis in total during 2008-2011, in collaboration with China, which hosts a population of over 1,000 birds.

After a period of systematic promotion of conventional agriculture in Sado, similar to the rest of Japan during and after World War II, the island is witnessing a revival of traditional practices over the past decade or so, catalyzed by its efforts to reintroduce the crested ibis into the wild.

In the course of developing sustainable farming with low pesticide input, Sado has developed a local brand of rice certified as “ibis friendly farming” with added-value. Now it is expected that a “Sado model”, leveraging its GIAHS recognition, that integrates the agricultural biodiversity preservation system with the ibis-friendly farming system, can be disseminated from the island and be applied to other regions in Japan and beyond.

Similar to Sado, Noto Peninsula has a rich history and culture that dates back over 2,100 years and, according to archaeological surveys, an agricultural system that can be traced to the Nara Era over 1,300 years ago. The peninsula is characterized by a mosaic of managed socio-ecological systems (satoyama), such as terrestrial-aquatic landscape ecosystems comprised of secondary woodlands, plantations, grasslands, farmlands, pasture, irrigation ponds and canals; and satoumi, marine-coastal ecosystems comprised of seashore, rocky shore, tidal flats and seaweed/eelgrass beds. 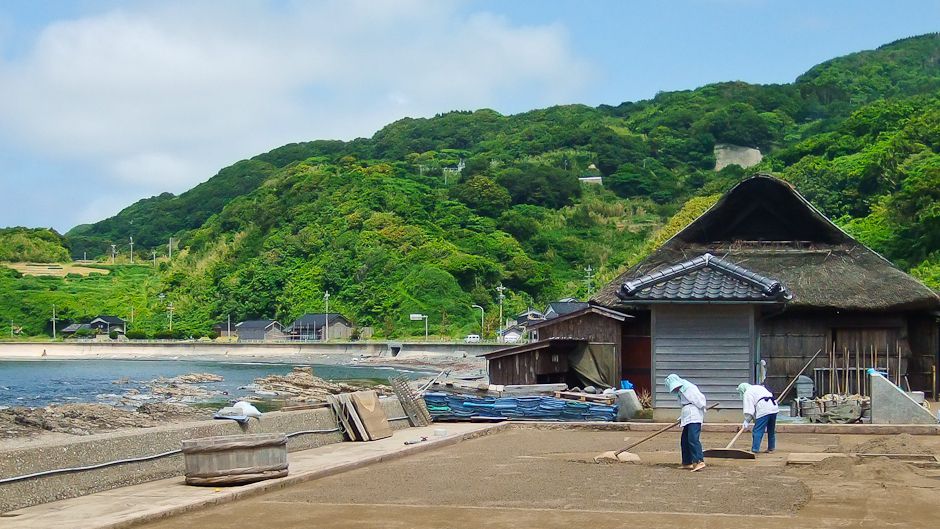 Today, indigenous animism, feudal era based hereditary resource use rights and practices, along with contemporary regulations and laws influenced by Western thought coexist and influence views regarding nature, resource use rights and practices on the Noto peninsula. The Ama divers, featured previously on Our World 2.0, constitute an example of this.

Within Japan, Noto is well known for its traditional customs based on indigenous Shinto and Buddhist traditions such as planting and harvesting festivals that focus on protection of marine life and coastal peoples’ livelihoods. In fact, the region has embraced Oku-noto Aenokoto, an agricultural rice planting and harvest ritual unique to the Noto region that was already inscribed on the UNESCO Representative List of Intangible Cultural Heritage of Humanity. Perhaps this existing recognition explains why four major cities and four towns in the Noto region were passionately united behind the region’s submission to the GIAHS panel.

Sharing knowledge with those in need

There is growing recognition of the potential of and respect for traditional knowledge and cultural practices as a tool for sustainable agriculture and land management. In reality, however, the communities of Sado and Noto, like many in Japan, have faced the challenges of aging population and depopulation and the resultant impacts on their regional economies.

To revitalize the regional economy of rural areas of Japan, through maximising traditional knowledge for landscape and agro-ecosystems as well as managing satoyama, there must be a move towards better co-benefit schemes that entail broader stakeholder involvement, and collaboration between/beyond sectors. For example, the GIAHS designation will benefit the emerging agriculture and tourism in synergy, bringing more opportunities rather than income generation from agriculture sector only. 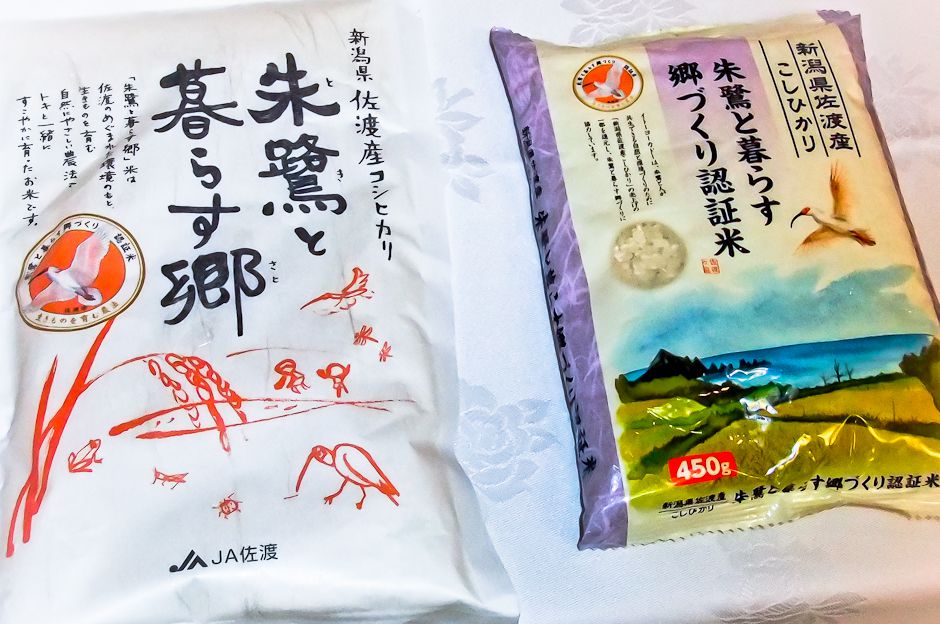 In the course of developing sustainable farming with low pesticide input, Sado has developed a local brand of rice certified as ‘ibis friendly farming’.

GIAHS branding is also highly expected to activate the communities in Sado and Noto to share their knowledge with other areas in need of revitalisation. There exists the will among citizens and organisations involved to generate and develop new business models (beyond agricultural and aqua-cultural businesses) that, combined with tourism, will broaden livelihood opportunities and can be applied to other rural areas and regions.

Additionally, there is a linkage among Sado and Noto, namely the Japanese crested ibis. Considering the two sister sites as GIAHS, there has been high expectation and a visionary plan to restore the environment for ibis in Noto. The revitalization of rural areas of Japan is expected to be driven by making best use of what is had — local resources such as agriculture, history, and traditional culture — and also by collaboration with GIAHS sites in other parts of the world.

The authors wish to thank all key players and participants for their huge efforts to realize the GIAHS initiative in Japan, particularly the mayors of Sado City, Koichiro Takano, and Nanao City, Bunpei Takemoto, who leads the Noto Regional Association for GIAHS Promotion and Cooperation, comprised of four cities and four towns (Suzu City, Wajima City, Nanao City, Hakui City, Noto Town, Anamizu Town, Shika Town, and Nakanoto Town). We are also grateful to Mr. Yutaka Sumita, Mr. Masahide Nakagawara, and their colleagues of the Hokuriku Regional Agricultural Administration Office for their excellent support and commitment. Without their dedication and endeavours, the GIAHS inscription would not have been possible.

Luohui Liang is an Academic Programme Officer of the Global Change and Sustainability Section at the United Nations University Institute for Sustainability and Peace (UNU-ISP), Tokyo. Previously he was the Managing Coordinator of the UNU global initiative on People, Land Management and Environmental Change (PLEC) (1998 to 2002), an Honorary Research Fellow at the University of Aberdeen, Scotland (1995-1996) and a Land Use Planning Officer at the Yunnan Bureau of Land Management, China (1987-1998). His research interest covers sustainable management of land and biodiversity in agricultural landscapes.

Shimako Takahashi, a Visiting Research Fellow of UNU-ISP, currently works for Japan International Cooperation Agency Headquarters. From 2004 to 2011, she has contributed to UNU’s agrodiversity research projects, the GIAHS Initiative (India and Japan), and University Network for Climate and Ecosystems Change Adaptation Research (UN-CECAR), with a focus on community-based agricultural resource management and indigenous knowledge. Previously she worked with the FAO, UNDP Viet Nam, and the National Institute of Genetics in Japan.