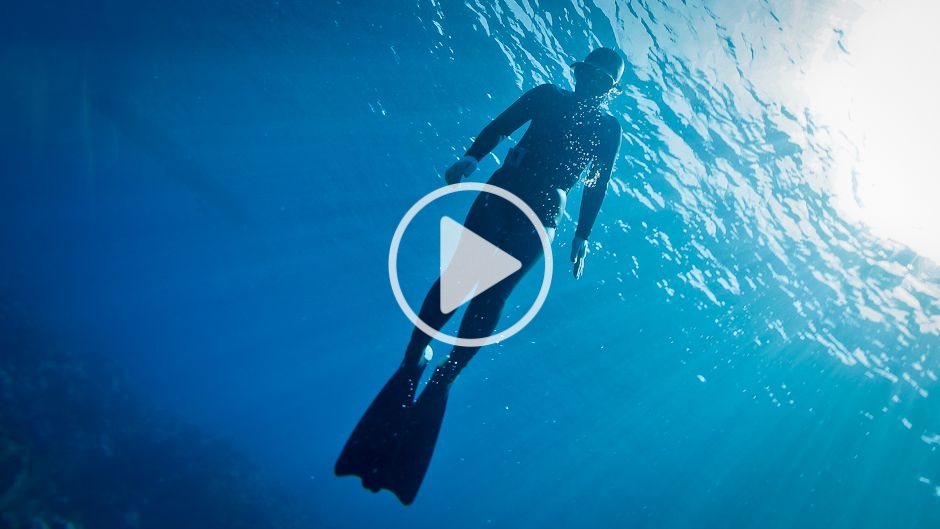 Remote lands are often treasure boxes full of local lore. Along the far-flung peninsulas of the Japanese archipelago, local legend claims that the ama-san, women free divers, were once seafaring gypsies of the north-eastern Asian seas.

Ethno-historians echo the possibility that ama divers travelled with the currents from continental Asia across to southern Japan where they split into two distinct nomadic communities; one travelling to the Pacific Ocean coast, the other moving northwards along the Japan Sea coastline. The legend continues, recounting that one group was carried north by a typhoon, to then be shipwrecked and left to survive on the rocky shores of Noto Peninsula on the Japan Sea.

To this day, descendants of the shipwrecked ama-san continue a seasonal semi-nomadic lifestyle, as shown in the video brief that accompanies this article. In the winter months they stay close to mainland shores, diving for namako (sea-cucumber) and oysters.

Come spring, a few elders move to Hegura Island, an outpost island 50 kilometres from the peninsula shores. Younger ama-san follow during the monsoon rains in late June and for three months a year, the ama divers claim their hereditary rights to dive for abalone in the waters around Hegura Island; local historical records show that the claim was bestowed to their female ancestors by Lord Maeda during the feudal Tokugawa era (1603-1867).

“As it is with many remote areas in the world, the tides of change went almost unnoticed in the ama community of Hegura Island.”

Feudalism was abolished in 1867 and a new era embracing western thought, laws, science and technology swept through the Japanese archipelago. And yet, as it is with many remote areas elsewhere in the world, the tides of change went almost unnoticed in the ama community of Hegura Island. Their rules of social order, fishing rights and resource management based on collectivism and kinship persisted.

Beyond decisions of community-based resource use and management are also questions about technology and lifestyles. Whether to allow automobiles, vending machines and other technologies that may impact island lifestyles are questions that have been on the ama’s community agenda in more recent years. Some of the older ama-san say that the discussions their elders had about adopting technologies, a type of debate that was new many decades ago, seem very standard now.

“Technological innovations can potentially alter natural abilities, and it was this that the ama-san questioned.”

Visual acuity, lung capacity and hunter instinct are the defining elements of ama divers. Technological innovations can potentially alter these natural abilities, and it was this that the ama-san questioned. To what degree do you enhance natural abilities in securing marine resources? Will this potentially lead to exhaustion of the very resources that sustain you?

These questions were first asked at the turn of the 20th century when diving goggles were introduced. Some cautioned about the potential dangers of overfishing resulting from increased visual ability, and therefore the use of goggles was initially limited to one hour per day. As time passed however, goggles became standard diving gear.

The next innovation debate focused on wet suits, followed by flippers (both are used today). Like the goggles, initial concern about potential negative impacts on marine resources faded with time. The next debate was about whether or not to allow oxygen tanks. Collective voting resulted in a ‘no’ verdict. Five decades have passed since this decision was made, and not once has it been questioned nor challenged among the ama-san of Hegura Island.

There is a hint of pride in their voices and one cannot help but wonder if the decision was influenced by pride in their identity of being free divers, more than a scientifically-based understanding that adoption of oxygen tanks could potentially lead to over-harvesting and eventual exhaustion of the marine resources sustaining their community. Just how much the psychology of cultural identity coloured the collective ‘no’ of the Hegura Island ama-san is unclear.

Yet, the traditions passed on from mother to daughter are not only about techniques for increasing lung capacity, learning how to read ocean currents, and where to find the best quality abalone. They also include questioning how lifestyles could potentially be changed by indiscriminate adoption of technologies all in the name of progress. So perhaps the decision to reject the use of oxygen tanks grew simply from the sense of belonging that daily interaction in the marine web of life has instilled in the hearts of the ama-san.

This video brief was produced by the United Nations University Media Studio’s Kaori Brand in partnership with the UNU Institute for Advanced Studies.