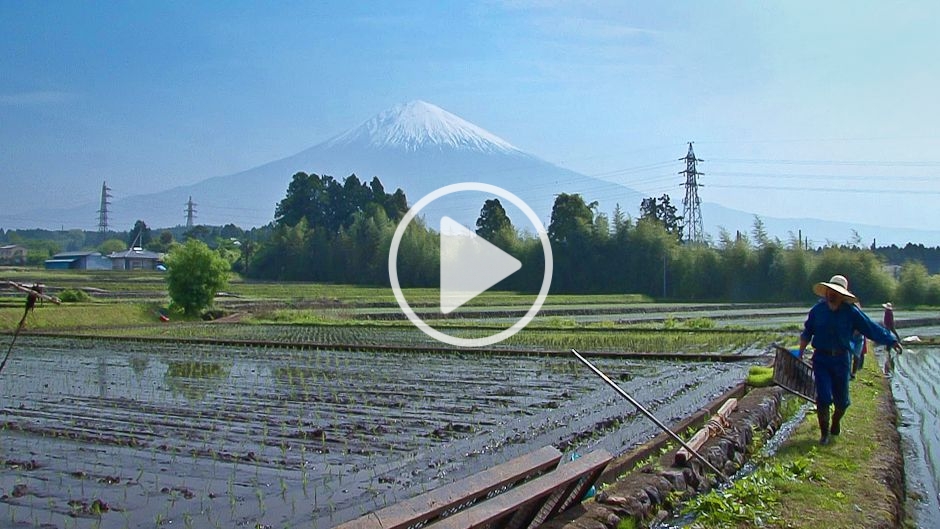 When the Konohana Family Farm was established around 16 years ago in the shadow of Japan’s picturesque Mount Fuji, its handful of founding members did not even know that the concept of an eco-village existed.

Today, this sustainable community is home to more than 60 people who cultivate over 250 rice and vegetable crops across 16 hectares in Shizuoka prefecture’s Fujinomiya City, 2.5 hours west of Tokyo.

Furthermore, Konohana’s organic, seasonal, vegetarian and bio-diverse agricultural practices are now being taught to fledgling eco-villages in Japan and across the Asia-Pacific.

Environmental scientist Michiyo Furuhashi (featured in the video brief that accompanies this article) joined this ‘family’, whose relationships are based more on kindredness of spirit than genetic connections, back in 2007.

“The previous work I did was very interesting, but in the end I felt that practicing a sustainable lifestyle was more important than gaining a steady income. That’s the reason why I joined Konohana,” she told Our World 2.0.

“I felt that practicing a sustainable lifestyle was more important than gaining a steady income.”

Furuhashi is now a certified eco-village trainer. She recently attended the 4th International Eco-Village Conference held in Tokyo in May 2010, along with participants from the United States, the Philippines, India, China and Korea, among other countries. Together with one of Konohana’s founders, Isadon, she shared her knowledge on how to build and maintain a sustainable community from the ground up.

The term eco-village first appeared in 1991 thanks to astrophysicist-cum-sustainability expert Dr. Robert Gilman who defined it as a:

Not that Furuhashi, who is also the Global Eco-village Network (GEN) representative in Japan, gets too caught up in definitions herself.

“Many people ask me what the definition of eco-village is but I think there is no clear definition. For example, some mansions [high-rise apartment buildings] that are concerned with the environment can be considered eco-villages; a cluster of eco-buildings can be called eco-village; a community like ours can call ourselves an eco-village.”

In 2008, GEN President Jonathan Dawson estimated that there were 1,500 eco-villages worldwide. These can be found in both the developed and developing worlds, but have evolved for different reasons, as illustrated in a special report by the Ecologist (PDF). In the global South, the authors found that adherents have a “desire to throw off the influence of industrialized nations and return to the values and practices of traditional cultures.”

In places like Japan, however, Konohana and other communities have attracted citizens, often skilled and educated, disillusioned with a modern society driven by conspicuous consumption and accumulating money. Konohana members include engineers, IT professionals and trades-people, as well as more vulnerable citizens including a group known in Japan as hikikomori or those who have ‘pulled away’ from mainstream society.

Konohana and other communities have attracted citizens, often skilled and educated, disillusioned with a modern society driven by conspicuous consumption and the accumulation of money.

Connected to nature, neighbours and the net

Konohana, however, is neither cut off from the outside world, nor suspicious of technology, contrary to what some might associate with those who choose communal living. In fact, because of its online eco-village network activities, website and delivery service to over 100 regular customers who can order by fax or e-mail (buying the Farm’s excess produce to help the Family pay for electricity, transport fuel and farm equipment costs), the community has to be digitally literate.

Over a long period of time, Konohana has gained the wider local community’s trust because of the way it addresses Japan’s rural aging crisis. With an even spread of children, youth, middle-aged and older people, it has the people-power and knowledge to cultivate what would otherwise be fallow rice and vegetable fields.

Conversely, Konohana has reaped benefits from its location in a depopulating area. Neighbouring farmland has been given to the Family, allowing it to harvest more as its numbers increase. They also use recycled tempura oil from local restaurants to fuel some of the Farm’s trucks and equipment.

Konohana also has good relationships with the local government. This is not surprising given that it attracted more than 2,000 Japanese and overseas guests to the area in 2009. Most came to do a spot of WWOOFing (World Wide Opportunities on Organic Farms) and every year, a few even decide to stay.

“A community life will save energy and reduce the overall environmental burden,” Furuhashi explains.

Although different measurement systems exist, the most prominent is put forward by the Global Footprint Network (GFN). They define an ecological footprint as a measure of “how much land and water area a human population requires to produce the resource it consumes and to absorb its wastes, using prevailing technology”.

According to GFN’s research, if everyone on Earth was to live like an American, the world would require up to five planets. Konohana, using a similar measurement scale, claim that their average per capita footprints are 0.8, in comparison to the Japanese average of 2.4.

“Cuba and North Korea also have per capita ecological footprints of 0.8. But if you look at our family’s lifestyle, we have abundant wealth and resources — we have plenty of food and a bunch of clothes. We live a very rich life,” Furuhashi believes.

It is reasonable to ask to what extent this community is sustainable given that members like Furuhashi and Isadon expend energy by flying, albeit occasionally, across Asia and the world to participate in international eco-village events. The community explains firstly that such travel is necessary in order to educate others, and secondly that only a few of the Family’s members do so, as part of their duties, on behalf of others who barely have any carbon footprint.

While many might be attracted to a lifestyle in harmony with nature, the truth is that joining an eco-village could require giving up some of the luxuries that a more individualistic lifestyle provides, such as individual possessions, food choices and personal space.

So, what does Furuhashi miss, if anything, from her previous lifestyle?

“Sometimes I feel like I want a personal space. But in terms of personal property, I feel nothing wrong with not having my own since I can share everything with others.”

“For example if I have bought a book, I do not read it day after day. Others can read it and improve their knowledge and that makes me feel happy, you know,” she explains.

For now, Furuhashi does not have too much time to read anyway. Last year, she began teaching the worldwide Eco-village Design Education (EDE) course that is certified by the UN Institute for Training and Research (UNITAR). Fifty students participated in the first year and alumnus will open up eco-villages all across Japan.

While Konohana may be the most recognised eco-village in the country, Furuhashi is keen to see this movement spread beyond the 10 eco-villages that exist in Japan today.

“I think that a sustainable living style like an eco-village is necessary for humanity to survive. And I want to spread that kind of lifestyle all over Japan and the world.”

This video brief was directed and produced by Megumi Nishikura with production assistance from Mark Notaras.

Mt. Fuji eco-village connects to a greener world by Mark Notaras is licensed under a Creative Commons Attribution-NoDerivs 3.0 Unported License.