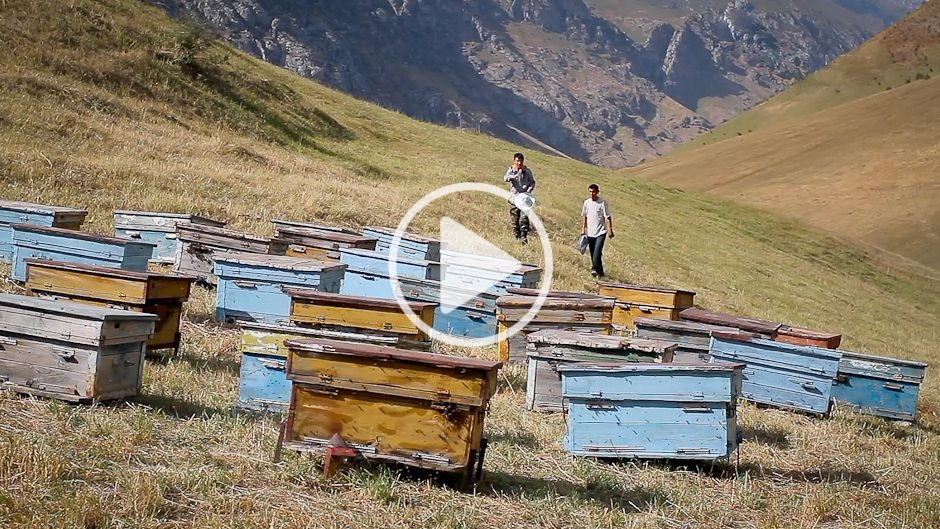 In Kyrgyzstan’s Pamir-Alai mountains, remote villages are tucked high among the awe-inspiring panoramas of one of the world’s most rugged biophysical environments. Short bursts of summer and long winter dormancy ensure that the ecosystem, and the livelihoods that it supports, exist in a delicate balance.

For centuries the people inhabiting this region have relied on animal grazing and agriculture as primary sources of income. During the era of Soviet governance, however, many traditional forms of land management were lost when diversified livelihoods were exchanged for a system based on centralised collective farms.

Given the severe climate, the already narrow livelihood options are increasingly vulnerable to environmental degradation and disasters such as landslides. In many areas, generations of poor pasture management have hastened the environmental decline beyond the speed of nature’s ability to recuperate.

“The unique ecosystem of the Pamir-Alai mountainous region is sensitive and delicate. That is why whenever there is a small change or interference, whether by humans or nature, the environment immediately reacts,” notes Maksat Anarbaev, from Kyrgyzstan’s National Center for Mountain Region Development.

Anarbaev is a researcher collaborating with the Sustainable Land Management in the High Pamir and Pamir-Alai Mountains project (PALM). This integrated transboundary initiative of the governments of Kyrgyzstan and Tajikistan — in partnership with the United Nations University Institute for Environment and Human Security (UNU-EHS) — is addressing the interconnections between land degradation and poverty in a region that is one of Central Asia’s crucial sources of fresh water and home to rich biodiversity.

In the village of Murdash, Kyrgyzstan, Ulanbek Kasymov has felt firsthand the impacts of the region’s land degradation. Standing at the site where his house was destroyed by a landslide he gestures towards the collapsed mountainside, saying, “My uncles asked people to plant trees, as they protect the soil. There would be a garden and people could get fruit, but the landowners would not allow it. They said, ‘We are going to harvest hay so we don’t need trees.’”

PALM researcher Aibek Attorov of Osh University emphasises Kasymov’s point: “Here, people raise livestock. The area was used for village pastures. But as a result, as you can see, it is no longer possible to use this land as pasture, nor for growing hay.”

But change is being inspired with the targeted capacity building and grant support from the PALM project. Key to PALM’s success is that the micro-projects it supports are not the ideas of external advisors or government officials. Instead, PALM aims to support innovative initiatives that spring from the needs and visions of local communities.

“We have tried to support projects that can make a contribution to the environment while at the same time improving the economic situation for the local people,” says Anarbaev.

The herds and the bees

As the local school’s chemistry teacher, Kasymov perhaps grasps the science of Murdash’s ecological degradation more easily. Following the landslide that destroyed his home, he became even more inspired to find solutions to the village’s livelihood and environmental challenges. When he heard about PALM’s small grant program he set out to organise a group of neighbouring villagers to revive a dying tradition that he grew up with: beekeeping.

“I learned beekeeping when I was in the eighth grade from my uncle and father by watching how they did it. We followed them because we were just kids and we carried the smokers and wood-frames,” Kasymov reminisces.

But since his childhood, livelihoods such as beekeeping have become increasingly marginal while most households have continued to raise large herds of livestock — a carry-over from the unemployment and few sources of income following the country’s independence in 1991 when collective farms were closed. Kasymov’s family was no different, but through the PALM project he and other villagers have learned how the decades of overgrazing near the village have contributed to environmental and land degradation.

His family’s decision to reduce the size of their animal herd and increase honey production has paid off and provided a sustainable solution for Kasymov and a growing collective of Murdash beekeepers.

“The money from this trade is distributed among the members of our [beekeeping] group as food, clothing and financial aid. A lot of people are interested. Some of them want to make the effort, thinking they can make money and become wealthier with beekeeping. If they bring the boxes we will give them the bees, God willing,” he says.

A hive of ideas

PALM is successful precisely because of this kind of community-led sharing of knowledge and resources. This region is both harsh and remote and, due to the limited reach of modern communications, transferring the project’s learnings across communities is a central challenge for PALM — but one that is being overcome through prevailing village networks and relations.

Nevelina Pachova of UNU-EHS, the Regional Project Coordinator for PALM, explains that “[p]eople tend to have a radio and a TV, but hardly any internet. Knowledge is transferred via networks of relatives, farmers and friends. All of the micro-projects involve elements of community mobilisation. The project supports collective, rather than individual initiatives and this is a stimulus for strengthening relations and capacities for bringing about collective change.”

Much like the bees that Kasymov and his network tend to, the collective hive of ideas that PALM is nurturing could be the key to preserving the ecosystem and livelihoods of Central Asia.

The beekeeping network is supported by the Sustainable Land Management in the High Pamir and Pamir-Alai Mountains (PALM) project. PALM is executed by the Committee on Environmental Protection in Tajikistan and the National Center for Mountain Regions Development in Kyrgyzstan, with financial support from the Global Environment Facility and other donors. The United Nations Environment Programme is the Implementing Agency and the United Nations University is the International Executing Agency.

For an overview of findings from the PALM project, see the UNU Policy Brief:  ‘Towards sustainable land management in the Pamir-Alai mountains‘.

How Crop Diversity is Promoting Sustainable Livelihoods in Kyrgyzstan