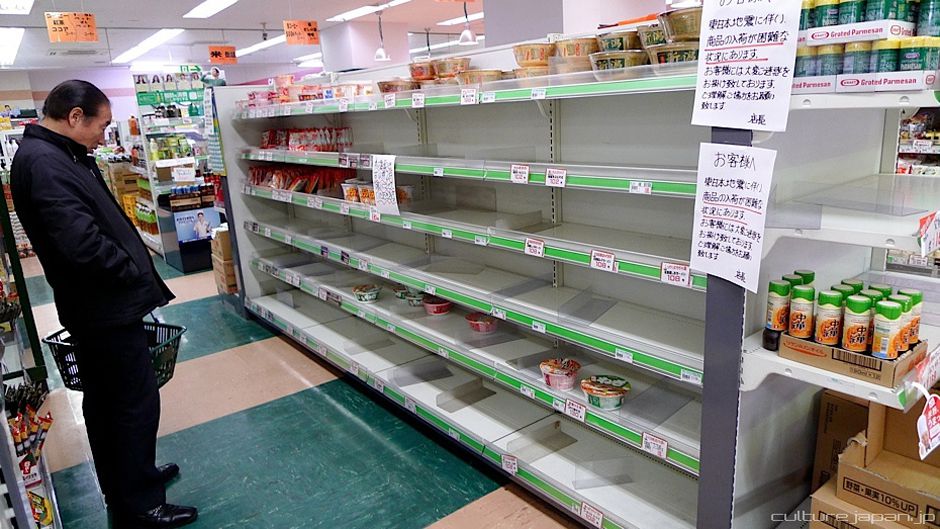 Most Japanese cannot remember the last time they had to think deeply about where their next meal would come from. Only the eldest of Japanese with memories of food rations and scarcity from World War II and its aftermath would possess experience from which to draw.

But that has changed since the triple disaster of March 11 as citizens inside and outside the catastrophe zone became increasingly concerned about both food security (e.g., food shortages at local stores) and food safety (i.e., radiation contaminated agricultural products).

Initially, genuine concerns about water and electricity supplies led many people across East Japan to begin hoarding key commodities such as bottled water, rice and milk. But while shortages of these staple goods were mostly due to increased demand rather than a drop in supply, more specialised fermented foods like natto (soybeans), yoghurt and miso were in scarce supply because Tohoku-based production facilities of major producers were damaged.

At least in theory, concentration of food production results in economies of scale that can lower prices for everyone’s benefit. At the same time, consolidation can result in increased fragility in supply for any given commodity. In relation to natto — a popular and very nutritious accompaniment to meals in Japan — the country’s largest producer, Takanofoods Co., was only able to operate at 80% capacity owing to the absence of a key packaging component from its industrial production line.

Interestingly, though Japan’s households have lost the skills to make foods like natto due to agricultural industrialisation and urbanisation, some people have, anecdotally at least, started making their own yoghurt — a considerably easier and shorter process than making natto or miso — as milk starts to reappear on supermarket shelves.

Perhaps more importantly to many, beer factories damaged by the earthquake and tsunami are still struggling to resume normal production. And while larger companies, including some with global operations like Sapporo and Asahi can probably absorb short term financial losses, it is smaller sake and beer brewers in the disaster area that have either been destroyed or face a struggle to resume normal production, compounded by rolling electricity blackouts.

Still, with restraint being urged and at least partly observed at this year’s cherry-blossom festival, the worry is not so much about whether alcohol is available or not but rather about an economic slowdown due to lower consumption. The latter fear has even prompted some Iwate-based brewers to post videos on YouTube urging people to resume partying as usual.

While people in the disaster area continue to rely upon food drops and charity provided from across Japan and overseas, a longer-term anxiety is developing amongst the larger Tokyo metropolitan area of 36 million people who live 270 kilometres south of the Fukushima nuclear facility. Understandably, people across the capital have been worried that food — particularly fruit, vegetables and fish they purchase from Fukushima and surrounding prefectures — could contain nuclear radiation.

This means that farming communities based in, near or well away from the 30-kilometre evacuation zone, like one eco-friendly community in neighbouring Tochigi, will suffer both economically and socially. The government ban in March of agricultural products from Fukushima even resulted in one organic farmer, who had spent years preparing safe and healthy soil for his crops, taking his own life.

But to what geographic point do people’s concerns about radiation extend? Once nearby prefectures are associated with contamination, even if the contamination is confined to one small area or a few products, shoppers in Tokyo may choose to stay away from all raw or fresh products from an entire prefecture. When the Japanese government prohibited the sale of spinach from Ibaraki prefecture, south of Fukushima, this created the overall perception that produce from Ibaraki could be a health risk.

In response, community groups were quick to set up online campaigns and farmers’ markets to “blow away restrained buying” and prevent under-threat farmers from losing their incomes and reputations.

The government too, in order to allay people’s health fears, has been proactive in conducting tests that verify which products are safe to eat. The problem here is that the credibility of Japanese authorities generally has been undermined by their handling of the nuclear crisis, and therefore people might be hesitant to accept their advice on food safety issues. Who and what information to trust in this situation continues to be a daily challenge faced by everyone in East Japan.

Japanese cuisine and produce have forged a reputation for sophistication and quality, arguably unmatched anywhere in the world. Tokyo has held the title of the world’s premier restaurant city for four consecutive years, with a record 14 restaurants receiving three stars in the 2011 version of the coveted Michelin guide.  Tokyo’s rise as the world’s culinary capital has coincided with growth in the popularity of Japanese cuisine, especially sushi and famed Japanese beef (wa-gyu), and establishment of the country’s strong reputation as a provider of quality produce and seafood.

But the tsunami demonstrated that something established over decades can be dismantled in a few minutes. In relation to seafood in particular, the “negative perception” that a prefecture like Ibaraki is suffering within Japan is being replicated on the international stage with respect to food from all over Japan. Both foreign tourists travelling to Japan (the numbers of which have drastically slowed of course) and overseas importers are avoiding Japanese seafood in particular, even if it has been harvested from areas unaffected by the disasters. These boycotts are affecting the whole country’s fishing industry that was already decimated by the destruction of over 2,300 fishing vessels and 125 harbours.

With growing doubts held by tourists, chefs and diners over the extent of nuclear contamination, it was only a matter of time before trading partners began implementing food bans. Countries including the United States, South Korea and Taiwan have all banned various foods harvested from Japan’s nuclear-affected areas.

At the same time, to address people’s fears about Japanese food imports generally and doubts about the accuracy of information forthcoming from Japanese authorities, importing country governments began conducting their own tests. On April 4, Taiwan’s Atomic Energy Council found that all 721 imported Japanese food samples tested for radiation had passed.

Generally, confusion reigns thanks to media hype and conflicting information being provided by governments, scientists and activists. On 5 April, it was reported that India had decided to ban food imports from Japan for 3 months.  If this seemed like an overreaction, to ban all imports rather than those from affected areas, then that is because it probably was. On 8 April, the Indian government at an inter-ministerial meeting claimed no such ban would take place.

In order to offset the lost agricultural production from the 10,000 farms destroyed by the tsunami, supply gaps in Japan’s food markets have quickly been filled by farmers from the United States, Thailand and China, as well as domestic producers from unaffected regions.

It is too early to tell, however, what the long term effect on Japan’s relatively low food security ratio of 40% will be. But even without the events of the last month, continuing rural flight, changing dietary patterns and the current government’s pursuit of more open agricultural trade, have been undermining efforts to increase food self-sufficiency to 50% by 2020 under the Food Action Nippon campaign (in Japanese only). It is difficult to see how the country’s food security situation can improve in the future, unless there are drastic policy changes.

Regardless of whether policy-makers are powerless or unwilling to halt this inevitable slide into more reliance on imported food, Japanese multinational companies looking for investment opportunities have gradually been making moves into overseas food and beverage markets. There are only so many drinks and snacks that can be marketed to an economy whose population is rapidly ageing.

It is reasonable to ask why food security matters at all, given that Japan can continue to import food from its friendly trading partners. Why should Japan, as an integrated member of the global trading system produce its own food at more expensive prices when others can produce it more efficiently?

Perhaps a less considered question is what happens if oil prices continue to rise as they have done in recent months? Given that the cost of food production is heavily tied to fossil fuels, how many citizens will be able to absorb food price rises in an already stuttering economy? Brendan Barrett has argued that Japan’s triple disaster constitutes a dry-run for peak oil and provides us with valuable lessons for the future.

In the last month, as uncertain conditions in Tokyo and beyond have prevailed, many families returned to their hometowns in other, often less urban, parts of Japan. There, people find temporary safety in local food systems, where there may be fewer food choices but also a lower need to rely on complex, and often distant trade and production systems. In an upcoming Transition Japan article, we’ll explore the question of how these local solutions, some of which we have covered on Our World 2.0 before, can aid Japan’s transition to the future.

In the meantime, residents of Japan are being encouraged to purchase goods from those areas most affected by the human and natural calamities of last month. With concerns about radiation still on people’s radars, unfortunately for thousands of agricultural and fisheries workers in the region, it’s not a risk many people are willing to take.

With the problems facing the Fukushima plant likely to continue for another ten years this may suggest that the reputation of agricultural brands in the surrounding regions, if not Japanese food across the world, will continue to be questioned well into the long term. After all, who would by food with the “Made in Chernobyl” stamp, even today?