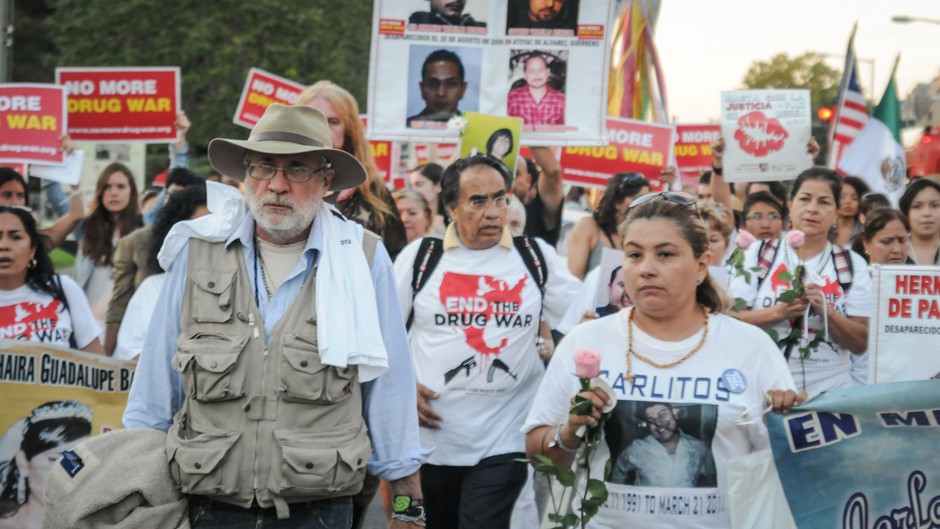 Seattle’s South Park neighbourhood has seen its share of drug-related crime and violence. Many of its residents are recent immigrants from Mexico; some came north fleeing the drug cartel violence that has ravaged their home communities. So, the South Park Community Center was a poignant venue for Mexican poet, writer, and activist Javier Sicilia to speak about his campaign to end the drug war in his home country.

He began the evening with a moment of silence for all the lives lost — somewhere between 60,000 and 100,000 — since the Mexican government stepped up the war against drug cartels in 2006. Then, his commanding voice heavy with grief, Sicilia read a poem:

All absence is cruel
and nonetheless, remains like a space that comes from the dead,
from the bleached roots of the past.
Where might we turn?

Sicilia wrote this poem, “The Survivor”, in 2009. Two years later, he became a survivor of heartbreaking absence himself, when his 24-year-old son was murdered, with six of his friends, by drug traffickers in Cuernavaca, Mexico. With the cruel loss of his son, Sicilia did not know where to turn. He wrote a final poem dedicated to his son, Juan Francisco, and then renounced writing poetry.

Nonetheless, Sicilia continues to write tirelessly: essays, journalism, and speeches protesting Mexico’s drug war. He has called international attention to the war’s almost unspeakable violence, in which, as he described it that evening in South Park: “[People are] decapitated, dismembered, stuffed into trash bags and left under bridges, put into crematoria or barrels of acid so that even their fingerprints are erased. So all physical evidence is erased. There is no list of the tens of thousands who have disappeared. There are no fingerprints.”

The drug war has devastated so many lives on both sides of the border. How can we stop it? Where might we turn? In the last few years, Sicilia and many others have begun to answer these seemingly impossible questions. After his son’s murder, he walked the fifty miles from his home in Cuernavaca to Mexico City in protest, following the country’s long tradition of protest marches to the nation’s capitol. On 3 April 2011, he published “An Open Letter to Politicians and Criminals” in Proceso, Mexico’s most important newsweekly. It quickly circulated across the country and then around the world, with a title taken from the letter’s refrain: “¡Estamos hasta la madre!” This Mexican colloquialism is far more powerful than its English equivalent: “We’ve had it up to here!” In his letter, Sicilia noted that he and others in his home state of Morelos would be taking to the streets. He invited others to join their effort, and tens of thousands of Mexicans in forty cities did.

Communities all over Mexico have suffered drug war violence for years — and some of them have challenged the drug traffickers — but after Sicilia’s appeal, a national movement quickly coalesced. The five demands of the Movement for Peace with Justice and Dignity (MPJD) to the Mexican government are:

MPJD has made tangible progress toward its first goal, convincing the Mexican government to create a seven-member “Victims’ Commission,” inaugurated in December 2013. The Commission will offer economic reparations to those who have lost family members — a crucially important symbol, as the Mexican government is acknowledging the scale of the violence.

United States military aid to Latin America, a total of more than $20 billion in the last decade, is now overwhelmingly focused on the drug war. Last year, 90 percent of funding was for counternarcotics operations; an increase of 30 percent over ten years ago. Over this same decade, drug war violence and the number of victims has increased ever more steeply. Since his son’s death, Sicilia and other MPJD activists have toured the United States several times to collaborate with US activists in calling for fundamental changes in both US military policy and international drug policy.

Growing concern over the harm caused by the drug war, on both sides of the border, may be one reason that public opinion about drug policy is shifting in the United States. A few days before Sicilia visited South Park, a Gallup poll found that for the first time, a strong majority (58 percent) in the United States supports marijuana legalization. Just one year earlier, the figure was only 48 percent. Sicilia is glad for the change, but laments how long it took. “If only that shift could have happened a decade earlier, perhaps we could have saved many lives in Mexico,” he says.

At the South Park Community Center, Sicilia spoke of the importance of Washington’s decision to legalize marijuana use. He thanked the audience for that decision by the state’s voters, saying, “We’re on our way to change. It’s a way to stop a bit of this war – this pain that is consuming us day by day.” Sicilia points out that legalization of recreational marijuana in Washington and Colorado is a first step toward one of MPJD’s goals: reducing drug traffickers’ profits.

Alison Holcomb, Criminal Justice Director for the ACLU of Washington and one of the key organizers of Washington’s legalization campaign, is optimistic about pro-legalization campaigns underway in many other states, including Alaska, California, Missouri, and Oregon. When asked about the brightest spot in the movement to shift drug policy, she points to Sicilia’s home country as “the most exciting.”

Holcomb predicts that if California votes in favour of marijuana legalization, Mexico won’t be far behind. She participated in a pro-legalization conference in Mexico earlier this year and believes the country’s federal government will support legalization because it needs to be “pragmatic about what will produce the most stability in the country.

Both Holcomb and Sicilia note that stability was a primary reason that Uruguayan President José Mujica called on his country’s legislature to legalize recreational marijuana use nationwide, as part of his administration’s broad range of progressive initiatives.

The law was passed on December 10, 2013 and goes into effect in March 2014. Uruguay’s drug policy has long focused on public health, rather than prison sentences. Drug use — including cocaine and heroin — has been decriminalized since 1974 and President Mujica has commented that the impact of marijuana legalization could provide useful information for possible policy changes with other illicit drugs.

Journalist Marcelo Jelen, writing in La Diaria, one of Uruguay’s largest newspapers, says of the Uruguayan reforms: “The foreign press and part of the public would like to attribute this avalanche of forward-thinking laws to Mujica, without considering the many years of study and advocacy by civil society.” The Uruguayan government’s willingness to take this bold step was due to a well-organized advocacy campaign by groups supporting the initiative, including women’s and LGBTQ rights organizations, students, trade unions, and health professionals.

“The role of social movements was indispensible,” agrees Hannah Hetzer of the Drug Policy Alliance in New York. “Latin America is now the continent where the debate around drug policy reform is the strongest. There is general agreement that the current approach is not working and that alternatives must be sought.”

She reports that several Caribbean nations are considering following Uruguay’s lead, while “other places in Latin America, such as Bogotá, are focusing more on increasing harm-reduction approaches to all drugs, such as clean syringe programs and controlled consumption rooms.”

Left-leaning President Mujica isn’t the only Latin American president advocating a new drug policy. At the April 2012 Summit of the Americas, Colombian President Juan Manuel Santos called on his counterparts to discuss new approaches to dealing with the problems of drugs in the Americas. Several Latin American presidents joined Santos and called on the Organization of American States to explore the prospects for a major shift in hemispheric drug policy, away from violence and toward public health and safety.

Five months later, the presidents of Colombia, Guatemala, and Mexico — all of them having waged the bloody drug war for years in their countries — asked the United Nations to host an international conference on drug policy, to review the possibilities for exactly such a shift. In September 2013, leaders from the same three countries addressed the UN General Assembly again, this time joined by Costa Rica’s president, asking for the policy change that Javier Sicilia’s MPJD has been advocating: replacing the drug war with policies that promote public health, respect human rights, and reduce harm to individuals and communities.

At the urging of the Latin American presidents, the regular 10-year review of United Nations drug policy was moved forward three years, to 2016. At that special session, stakeholders will discuss alternatives to the drug war. Public-interest organizations from around the world, ranging from the International Federation of University Women to the International Police Association, have joined the Vienna NGO Committee on Drugs to press for a more humane policy. Holcomb believes that the results of the UN special session hinge upon the expansion of marijuana legalization in the next couple of years.

Latin America’s growing resolve to end the US-driven drug war is shifting the paradigm. The movement for a less punitive drug policy is coalescing at every level — from the UN General Assembly to community gatherings in places like Seattle’s South Park. At that event, Sicilia was officially welcomed by a Washington state legislator. Rep. Luis Moscoso campaigned for marijuana legalization and now sits on the House committee that will manage both marijuana sales and the use of the excise taxes to fund public health and education. He says, “We lost the war on drugs decades ago. We still have such an investment in DEA [Drug Enforcement Agency] and other groups that are down there fighting the cartels and the coca growers. It’s a waste of money.”

For Moscoso, legalization is an international human rights issue. “The whole [illicit drug] industry and crime element behind it have just been allowed to grow and prosper around the world. Our market drives that. We take no responsibility for the fact that our appetite [for drugs] causes major problems in other countries. This is why these things need to be homegrown and home marketed.”

Now, even the presidents of many of the countries that have received the largest sums of money from the United States to fight the drug war — Colombia and Mexico, among others — insist a new strategy is needed. “The Survivor”, the poem that Javier Sicilia recited that night in South Park, includes these lines:

It is the glimmer of the great movement rooted in the small act, the “hint of river in a brook,” that motivates Sicilia. In the end, he says, we must turn to each other. “The real work is at the level of you-and-me, face-to-face, sitting and really listening to one another. We can only hope it will echo.”

Legalization is a Human Rights Issue: Latin America’s Resolve to End the Drug Wars by Wendy Call is licensed under a Creative Commons Attribution-NonCommercial-ShareAlike 4.0 International License.
Permissions beyond the scope of this license may be available at http://www.yesmagazine.org.

Wendy Call is a writer, translator, and educator based in Seattle.