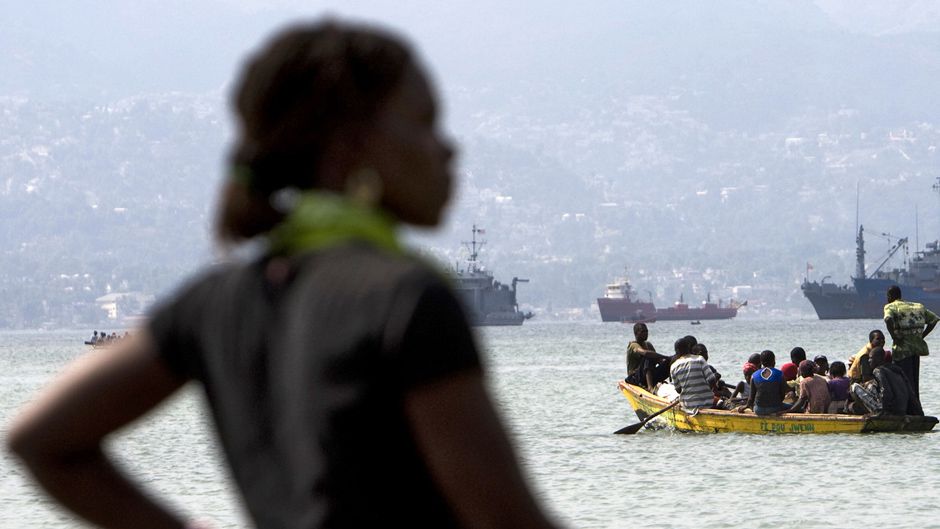 In recent months, a record number of refugees and migrants have drowned in their attempts to cross the Mediterranean Sea. According to recent UN estimates, in 2014 almost 220,000 migrants crossed the Mediterranean and at least over 3,500 died during their journey. Over 30,000 have already made the crossing so far this year, with around 1,500 reported dead or missing — more than 50 times greater than at the same point in the previous record year 2014.

And, again, we hear the familiar appeals from European politicians to stop this tragedy by ‘fighting’ or ‘combating’ smuggling (and trafficking) in order to stop the suffering of migrants on European borders. Although this all may sound very lofty, blaming the smugglers is a convenient scapegoating strategy that conceals politicians’ own responsibility for this humanitarian tragedy.

Smuggling is a reaction to border controls, not the cause of migration. Smugglers are service deliverers who help migrants to cross closed borders. They may be… criminals, they may deceive migrants, but smugglers are basically running a business.

Politicians (and the media slavishly copying their rhetorics) ignore that there is a direct relationship between the level of border controls and the number of migrant deaths. As I argued earlier, smuggling is a reaction to border controls, not the cause of migration. Smugglers are service deliverers who help migrants to cross closed borders. They may be involved in illegal activities, they may be criminals, they may deceive migrants, but smugglers are basically running a business. And there is only a market for this business because of the difficulties to migrate legally in search for work or to apply for asylum. So, the more governments militarise borders, the more they make it difficult to apply for asylum, the more they increase migrants’ dependency on smugglers to cross borders.

Irregular boat migration across the Mediterranean is anything but a new phenomenon. It has ever existed since the early 1990s and resulted from the introduction of visas for North Africans by the European Union countries in 1991-1992. This interrupted previously free seasonal and circular (back-and-forth) migration flows of workers from countries such as Morocco, Algeria and Tunisia, and compelled more and more people to migrate illegally.

From the 2000s, an increasing number of workers and also refugees from sub-Saharan Africa have joined this boat migration. The number of crossings oscillated between 30,000 and 80,000 per year (roughly 1–3% of total legal immigration — about 2.5 million a year — into the EU), mainly depending on labour demand in Europe. The marked increase in the number of detected crossings since 2013 is mainly the result of the increase in the number of refugees, particularly from Syria, but also countries like Eritrea and Somalia.

Twenty-five years of European border restrictions have not only totally failed to curb immigration but have had counterproductive results through an increase in irregular migration and an increasing dependence of migrants on smugglers to cross borders. They have also interrupted the previous circular movement, pushing migrants into permanent settlement and border controls led to a constant diversification, shifting and geographical expansion of crossing points. The toughening of border controls and ‘combating smuggling’ have also increased the likelihood that smugglers will exploit the vulnerable position of migrants by extorting them increasing amounts of money or abandoning them on sea.

Recurrent proposals to ‘combat irregular migration’ by toughening border controls and closing off legal migration routes are bound to fail, as these restrictions are among the very causes of the phenomenon they pretend to combat. Policy making is caught in a vicious circle of more restrictions-more illegality-more restrictions.

A second reason why European politicians bear direct responsibility for the rising number of deaths is their decision to stop the search and rescue ‘Mare Nostrum’ programme in November 2014. Many EU governments argued that cutting search and rescue operations would stem migration — as if refugees had no reason to flee their countries. (In October 2014, for instance, Theresa May, the UK Home Secretary, defended her decision to end British support for search-and-rescue operations for migrants in danger of drowning in the Mediterranean (which had so far saved the lives of over 150,000 migrants) were acting as a ‘pull factor’ for irregular migration).

There is no ‘solution’ in the sense of stopping this migration, which is likely to persist at current levels as long as conflicts in countries such as Syria continue, and migrants will inevitably keep on crossing the Mediterranean illegally as long as legal entry channels are blocked.

How wrong could they be? As a direct result of the suspension of Mare Nostrum, the number of border deaths has gone drastically up, while the number of migrants and, particularly, refugees has further increased. So, politicians’ have defended their voluntary decision to let people die at sea with the outrageous argument that this would deter people from coming. This shows politicians’ de facto disregard for human rights despite their hypocritical public grievances and crocodile tears about migrants’ tragic fate. These public displays of grief are nothing more than cynical attempts to appear humane while factually being involved in a political rat race who can appear ‘toughest’ on migration. Whatever reason politicians have to defend such tragic decisions, by doing so they have lost their credibility for public shows of moral outrage.

The lack of credibility among European politicians is shown by their unwillingness to save migrants in distress and host significant number of refugees. It would be outrageous to suggest the EU (the world’s richest economic block with more than half a billion inhabitants) lacks the resources to host refugees coming from war-torn countries such as Syria. What we are dealing with here is not an uncontrollable movement of masses of poor and desperate people from Africa and the Middle East to Europe. What we are dealing with is a humanitarian tragedy and a displacement crisis unfolding in the European periphery, in the turmoil of which a sizeable, but comparatively still small proportion of refugees seek protection in Europe.

A question of priorities

Despite all talk about ‘regional solutions’, it is easily forgotten that the vast majority of refugees stays in their own region. For instance, the vast majority of the 3 million Syrians refugees live in relatively poor neighbouring countries such as Turkey, Jordan and Lebanon. Compared to that the numbers of Syrians coming to Europe (a few hundreds of thousands so far) is quite limited. Europe currently hosts 4% of all Syrian refugees (see figure). With the exception of a few countries such as Sweden and Germany, most European countries have only accepted tiny numbers of Syrian refugees. As Alexander Betts has argued in a brilliant article “Forget the ‘war on smuggling’, we need to be helping refugees in need”, the recent proposal for a “voluntary” resettlement scheme for 5,000 refugees to emerge at last week’s Brussels meeting “is absurd against the backdrop of three million Syrian refugees”. 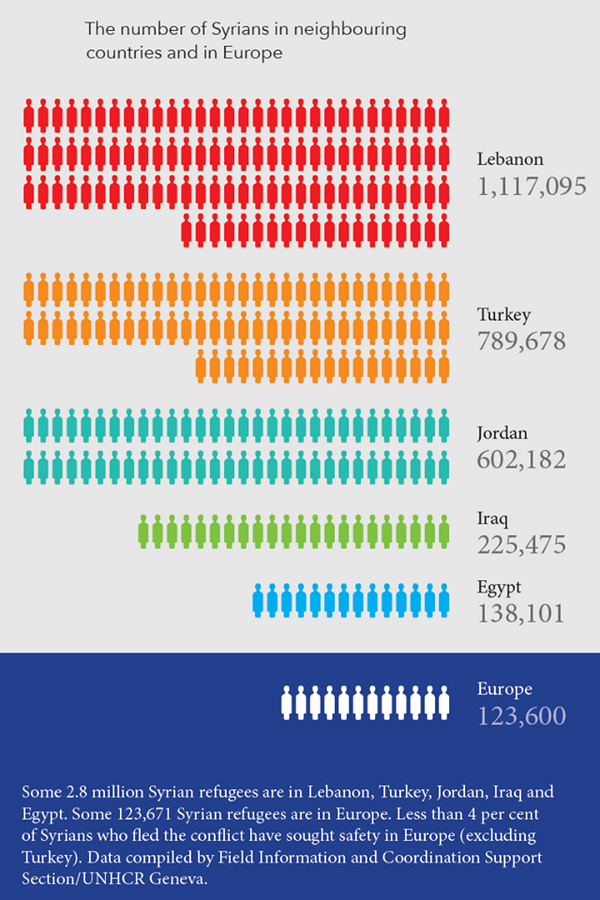 The truth is that there is no ‘solution’ in the sense of stopping this migration, which is likely to persist at current levels as long as conflicts in countries such as Syria continue, and migrants will inevitably keep on crossing the Mediterranean illegally as long as legal entry channels are blocked. Immigration restrictions and border controls create lucrative markets for smugglers and traffickers.

The only short- to medium-term ‘solution’ should be focused on helping refugees in need through (1) a serious scaling up of search and rescue operations; (2) a significant increase in refugee resettlement quota by EU countries and other wealthy nations; and (3) increased support to countries such as Lebanon, Turkey and Jordan to host refugees in the region.

Any thinking about ‘solutions’ in terms of a further toughening of borders controls and closing legal routes for migration will not stop migration but will only increase migrants’ dependency on smuggling and increase the death toll. The lack of support for serious search and rescue operations and the unwillingness to host significant numbers of refugees shows that the current response of EU countries is tantamount to saying “let their people drown”. EU politicians have become tragic actors in a self-inflicted drama which they decry so melodramatically.

This commentary was first posted 27 April 2015 on the personal blog of Hein de Haas, under the title: ‘Let their people drown: How EU politicians have become tragic actors in a self-inflicted migration drama’ and on the UNU-MERIT blog.

Let Their People Drown: The EU’s Self-inflicted Migration Drama by Hein de Haas is licensed under a Creative Commons Attribution-NonCommercial-ShareAlike 4.0 International License.
Permissions beyond the scope of this license may be available at http://heindehaas.blogspot.nl/.