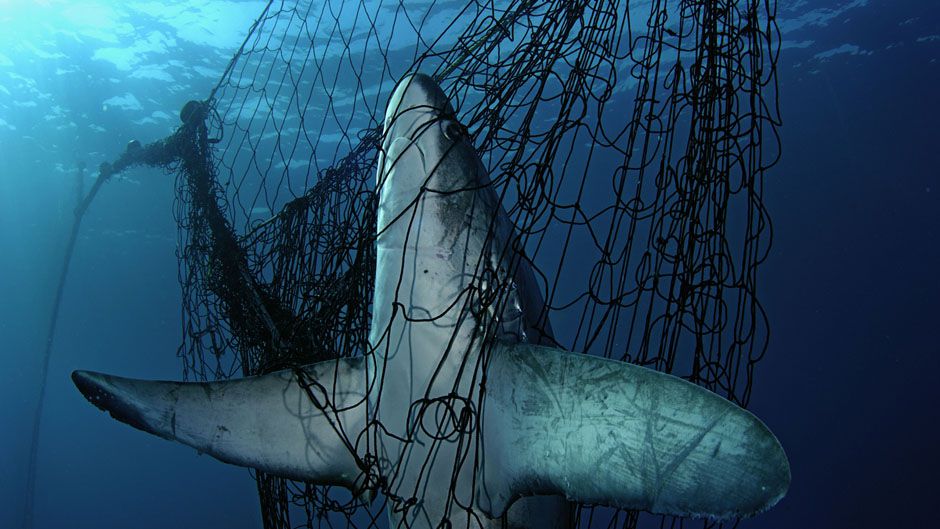 The rate of decline of Earth’s species doesn’t often make the six o’clock news or get to the top of most Facebook feeds. Why not? Are too many viewers unaware of or uninterested in the scale of biodiversity loss currently underway? Do media outlets fear that people will flip channels because the implications are too frightening for the average person to handle after a tough day earning a living? Or do these information gatekeepers presume to know that you don’t care?

Whatever the answer, the resulting popular state of denial is of great concern because, though there may not yet be a viral social media graphic on the topic, a new report details just how grave things are. Human pressure has had a stunning impact on Earth’s wild creatures in just 40 years, the World Wide Fund for Nature (WWF) reveals.

While the main recorded threat to biodiversity comes from habitat loss and degradation, the report found that fishing and hunting are also significant threats and climate change is a growing concern.

“This latest edition of the Living Planet Report is not for the faint-hearted,” says WWF International director-general Marco Lambertini in the report’s foreword.

“One key point that jumps out is that the Living Planet Index — which measures more than 10,000 representative populations of mammals, birds, reptiles, amphibians and fish — has declined by 52 percent since 1970.

“Put another way, in less than two human generations, population sizes of vertebrate species have dropped by half.”

For nearly two decades, WWF’s biennial Living Planet Report has monitored the health of our planet via the Index — which is compiled from a database maintained by the Zoological Society of London (ZSL). Produced in collaboration with ZSL, the Water Footprint Network and the Global Footprint Network, the report also measures how the way we live our lives impacts all life on the planet.

As dismal as this all may sound, the challenge is not an insurmountable one, the report maintains. But I would argue that it does require that we all take our heads out of the sand and become fully informed as to the state of our planet and the life support systems it gives us.

So, please do read on (and check out the super-comprehensive and easy to read report) and encapsulate the knowledge and hope you may acquire for whomever else will listen to you.

Species and spaces, people and places

Some species decline (and even occasional extinctions) is normal — part of the web of life — but let’s be perfectly clear that we are now talking about decidedly serious species loss rates:

However, while the findings of the 2014 report reveal that the state of the world’s species is worse than in previous years, the results also bring attention to available solutions. 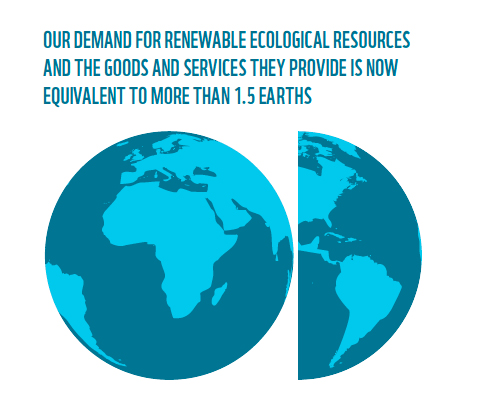 This year’s report shows that our demand on the planet is more than 50 percent greater than what nature can renew. It would take 1.5 Earths to produce the resources necessary to support our current ‘ecological footprint’.

This global overshoot means, for example, that we are cutting timber more quickly than trees regrow, pumping freshwater faster than groundwater restocks, and releasing CO2 faster than nature can sequester it.

As helpless as you may feel upon hearing such facts, knowledge is power as these are things we can stop doing, as the report’s authors underscore.

“The scale of biodiversity loss and damage to the very ecosystems that are essential to our existence is alarming,” said Ken Norris, Director of Science at the Zoological Society of London.

“This damage is not inevitable but a consequence of the way we choose to live. Although the report shows the situation is critical, there is still hope. Protecting nature needs focused conservation action, political will and support from industry.”

So, while it shows that biodiversity loss around the world is at critical levels, the report also highlights how effectively managed protected areas can support wildlife. (The Living Planet Index has been adopted by the Convention on Biological Diversity as an indicator of progress towards its 2011–2020 target to ‘take effective and urgent action to halt the loss of biodiversity’.) In one example, Nepal is noted for increasing its tiger population in recent years. Overall, populations in land-based protected areas suffer less than half the rate of decline of those in unprotected areas.

“The findings of this year’s Living Planet Report make it clearer than ever that there is no room for complacency. It is essential that we seize the opportunity — while we still can — to develop sustainably and create a future where people can live and prosper in harmony with nature,” said WWF International Director General Marco Lambertini.

Coming just six months after an Intergovernmental Panel on Climate Change study warned of the growing impacts of climate change, this report adds evidence to the finding that climate is already impacting the health of the planet.

“Carbon from burning fossil fuels has been the dominant component of humanity’s Ecological Footprint for more than half a century, and remains on an upward trend. In 1961, carbon was 36 percent of our total Footprint; by 2010, it comprised 53 percent,” the report says.

And panning out further (and connecting the dots) the Living Planet Report 2014 says that “three planetary boundaries appear to have already been transgressed: biodiversity loss, and changes to the climate and nitrogen cycle, with already visible impacts on the well-being of human health and our demands on food, water and energy”.

More than 200 river basins, home to over 2.5 billion people, experience severe water scarcity for at least one month every year, the report notes. With close to one billion people already suffering from hunger, the report shows how climate, combined with changing land uses, threatens biodiversity and could lead to further food shortages.

Constructive negotiations over an international climate deal are among the opportunities that exist to control these trends, the report argues. Completion of a global agreement next that clears the way to a low carbon economy is essential given that fossil fuel use is currently the dominant factor in Ecological Footprint.

Again, I stress that though this report may strike you as somewhat frightening, it is an excellent and accessible resource offering precious ecological understanding. We must force ourselves and encourage others to face the fact that our society and prosperity are built upon natural capital that is finite, and that we need to use it more wisely, and share it more fairly.

“Nature is both a lifeline for survival and a springboard to prosperity. Importantly, we are all in this together. We all need food, fresh water and clean air — wherever in the world we live,” Lambertini reminds us. 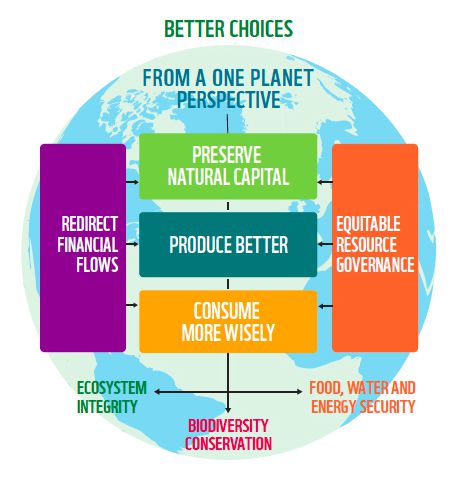 The report provides WWF’s “One Planet Perspective” with strategies to preserve, produce and consume more wisely, including examples of communities already making better choices to reduce footprint and biodiversity loss.

In Asia, the report shows how cities are innovating ways to reduce carbon emissions, integrate renewable energy and promote sustainable consumption. In Africa, the report profiles how government can work with industry to protect natural areas. In other examples from around the world, the report highlights initiatives to control pollution, transform markets and improve lives.

By following its programme for one planet living, WWF argues that global society can begin reversing the trends indicated in the Living Planet Report 2014.

A complementary set of negotiations on goals for the United Nations development agenda beyond 2015 creates the opportunity for countries to address how natural systems can be protected as world population surpasses 9.5 billion in coming decades.

Two other items on this prescription are the diversion of investment away from the causes of environmental problems and towards solutions, and the switch to making “ecologically informed” choices about how we manage resources.

These steps are within our reach and can and should be worked into your individual mindset: Vote with your dollars (no matter the scale), and demand that political representatives make the proper decisions.

Let’s Face Up to Earth’s Unraveling Web of Life by Carol Smith is licensed under a Creative Commons Attribution-NonCommercial-ShareAlike 4.0 International License.