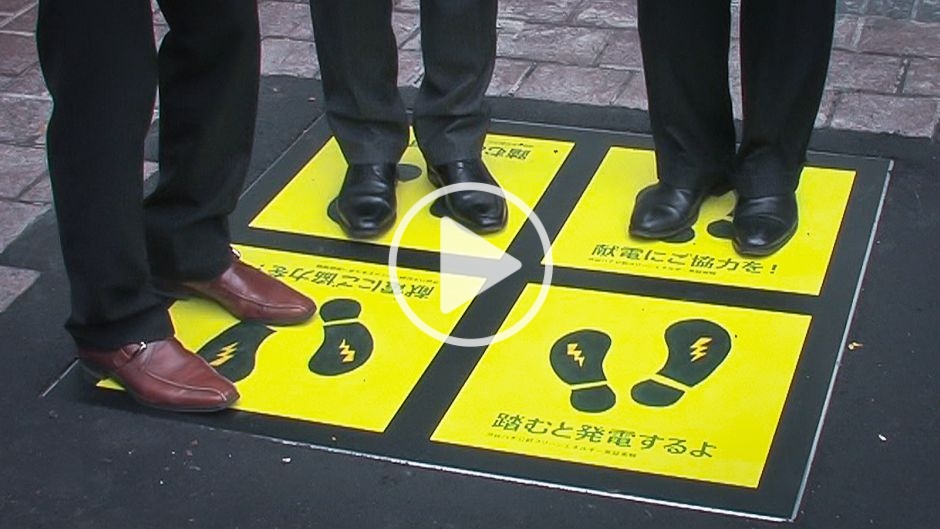 Kohei Hayamizu has a bold vision for the future: a city that is in itself an electric power station. A place where all roads, bridges and sidewalks generate electricity from the vibrations produced by the cars and people that move over them.

He is starting small by transforming one square meter into an electricity generator. But he has chosen the locaton wisely. He has placed four sheets in the pavement in one of the world’s busiest pedestrian areas – the Shibuya train station crossing, where everyday 900,000 people pass by.

The system is based on the technology Hayamizu developed at Keio University’s Graduate School of Media and Governance, and makes use of “piezoelectricity”, a property certain materials have to generate an electric current when they are squeezed or pressed.

The Shibuya location was chosen to make sure a high number of people would walk over the installation, thus generating a good amount of power. Hayamizu says that during the entire 20 day period of the installation, they will generate enough electricity to power 1,422 televisions for one hour (which is the same as one television for 1,422 hours if you could store the electricity somehow).  But it also has the purpose of reminding us in a positive and playful way of the pressing need we have to find new and cleaner sources of energy.

Hayamizu thinks that similar systems could be installed on a wide range of scales, from small systems embedded on mobile phones, to huge systems installed on highways that would harness the electricity generated by the movement of cars and big trucks.

The installation in Shibuya’s Hachiko square is running from December 5 to 25, so if you pass by, make sure you walk over the yellow square and generate some clean energy.

Why we need innovators and visionaries?

The thinking that underpin’s Hayamizu’s work will represents the difference between incrementally fixing our current energy problems and making great leaps forward. It is similar to the innovative thinking that went into the development of the Toyota Prius.

The designers of the Prius understood that they could build a new type of car that harnesses energy every time the driver brakes and when the car runs downhill. The result was a dramatic reduction in fuel consumption.

Transforming our cities into power stations is one example of how to create a totally new energy system. That is why we need more people like Hayamizu and more projects like this.