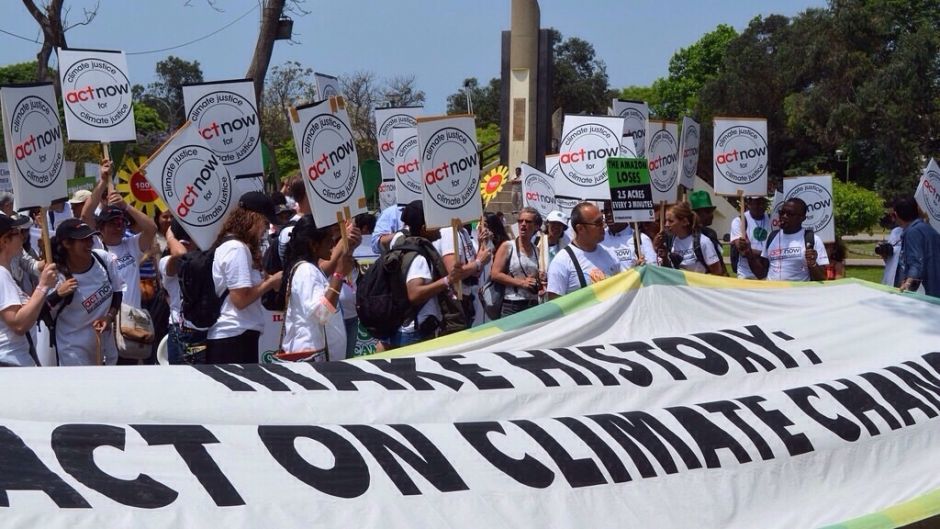 After a 25-hour extension, delegates from 195 countries reached agreement on a “bare minimum” of measures to combat climate change, and postponed big decisions on a new treaty until the 21st Conference of the Parties (COP 21), to be held in a year’s time in Paris.

After 13 days of debates, COP 20, the meeting of the parties to the United Nations Framework Convention on Climate Change (UNFCCC), failed to resolve key issues such as the monitoring of each country’s commitment to emissions reductions, recognition of loss and damage caused by climate alterations and immediate actions, representatives of observer organisations told IPS.

The agreed document was the third draft to be debated. The Lima Call for Climate Action, as it is known, stipulates that countries must propose national greenhouse gas emission reduction targets by October 2015.

It also “urges” developed countries to “provide and mobilise financial support for ambitious mitigation and adaptation actions” to countries affected by climate change, and “invites” them to pledge financial contributions alongside their emissions reduction targets. This exhortation was a weak response to the demands of countries that are most vulnerable to global warming, and it avoided complete disaster.

But observers complained that the Lima Call pays little attention to the most vulnerable populations, like farmers, coastal communities, indigenous people, women and the poorest sectors of societies.

“There were a number of trade-offs between developed and developing countries, and the rest of the text has become significantly weaker in terms of the rules for next year and how to bring climate change action and ambitions next year,” Sven Harmeling, the climate change advocacy coordinator for Care International, told IPS. “That has been most unfortunate,” he said.

The 2015 negotiations will be affected, as “they are building up more pressure on Paris. The bigger issues have been pushed forward and haven’t been addressed here,” he said.

Harmeling recognised that an agreement has been reached, although it is insufficient. “We have something, but the legal status of the text is still unclear,” he said. If there is really a “spirit of Lima” and not just a consensus due to exhaustion, it will begin to emerge in February in Geneva, at the next climate meeting, he predicted.

The countries of the South voted in favour of the text at around 01:30 on Sunday 14 Dec., but organisations like Oxfam, the Climate Action Network and Friends of the Earth International (FoEI) were very critical of the result. The Lima negotiations “have done nothing to prevent catastrophic climate change,” according to FoEI.

More than 3,000 delegates met 1-13 Dec. for the complex UNFCCC process, with the ultimate goal of averting global warming to levels that would endanger life on Earth.

Peruvian Environment Minister Manuel Pulgar-Vidal, who chaired the COP 20, extended the meeting in order to build bridges between industrialised countries, the largest carbon emitters, who wanted less financial pressure, and developing countries who sought less control over their own reductions.

“Although we seem to be on opposite sides, we are in fact on the same side, because there is only one planet,” said Pulgar-Vidal at the close of the COP.

The specific mandate in Lima was to prepare a draft for a new, binding climate treaty, to be consolidated during 2015 and signed in Paris. Methodological discussions and fierce debates about financing, deadlines and loss and damage prevented a more ambitious consensus.

“What countries need now is financing of climate action and what we need is urgent action now, because we need our emissions to peak before 2020 if we are to stay on a safe path,” Tasneem Essop, climate coordinator for the World Wide Fund for Nature (WWF), told IPS.

“We need to protect the rights of climate impacted communities,” she said. The defencelessness of the most vulnerable people on the planet is what makes action a matter of urgency.

However, the Lima agreement contains few references to mechanisms for countries to use to reduce their emissions between 2015 and 2020, when the new treaty replacing the Kyoto Protocol is due to come into force.

These actions need to start immediately, said Essop, as later measures may be ineffective. “What governments seem to be thinking is that they can do everything in the future, post 2020, when the science is clear that we have to peak before that,” she told IPS.

Unless action is taken, year by year extreme climate, drought and low agricultural yields will be harder on those communities, which bear the least responsibility for climate change. Essop believes that governments are waiting for the negotiations in Paris, when there were urgent decisions to be taken in Lima.

Among the loose ends that will need to be tied in the French capital between 30 Nov. and 11 Dec. 2015, are the balance to be struck between mitigation and adaptation in the new global climate treaty, and how it will be financed.

“If we hadn’t come to the decision we have taken (the Lima Call for Climate Action), things would be more difficult in Paris, but as we know there are still many things to be decided bewteen here and December 2015, in order to resolve pending issues,” Laurent Fabius, the French Foreign Minister, said in the closing plenary session.

The goal of the agreement is for global temperature to increase no more than two degrees Celsius by 2100, in order to preserve planetary stability. Reduction of fossil fuel use is essential to achieve this.

Mitigation, adaptation, and loss and damage are the pillars of the new treaty. The last two issues are vital for countries and populations disproportionately impacted by climate change, but faded from the agenda in Lima.

“It’s disastrous and it doesn’t meet our expectations at all. We wanted to see a template clearly emerging from Lima, leading to a much more ambitious deal,” said Harjeet Singh, manager for climate change and resilience for the international organisation ActionAid.

“What we are seeing here is a continuous pushback from developed countries on anything related to adaptation or loss and damage,” he told IPS.

These are thorny issues because they require financial commitments from rich countries. The Green Climate Fund, set up to counter climate change in developing countries, has only received 10.2 billion dollars by this month, only one-tenth of the amount promised by industrialised nations.

The Lima Call for Climate Action did determine the format for Intended Nationally Determined Contributions (INDC), for each country to present its emissions reduction targets.

However, the final agreement eliminated mechanisms for analysing the appropriateness and adequacy of the targets that were contained in earlier drafts.

Negotiators feel that the sum of the national contributions will succeed in halting global warming, but observers are concerned that the lack of regulation will prevent adequate monitoring of whether emissions reductions on the planet are sufficient.