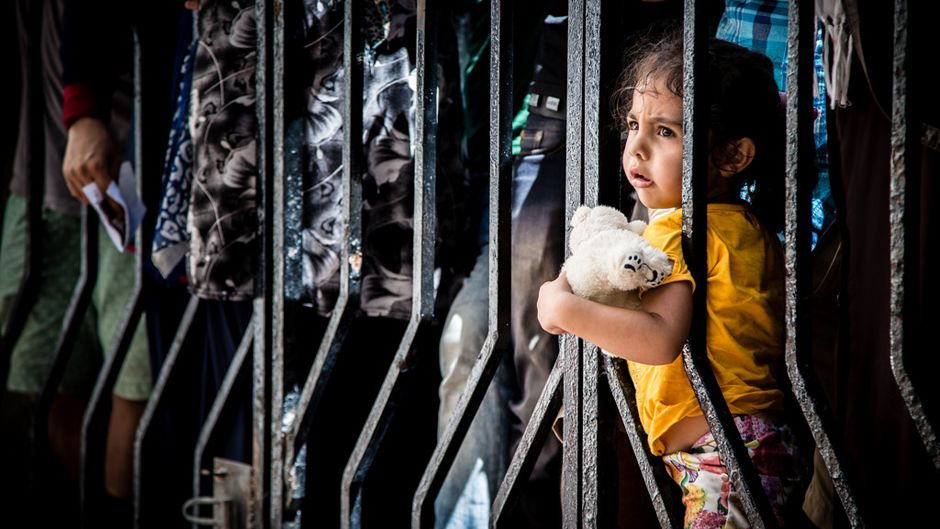 Already affecting almost half of the country’s 22 million people, the conflict in Syria has entered its fifth year and shows no sign of abating. With 7.6 million internally displaced people, some of whom have even had to flee several times, Syria has become the country with the largest number of internally displaced people in the world. Refugees who leave the country are crossing into border regions such as Turkey, Jordan, Lebanon, Egypt and Iraq in what has been one of the largest exoduses in recent history.

And now, deteriorating conditions in Syria and neighbouring countries are driving thousands of Syrians to risk everything on perilous journeys to Europe, the UN refugee agency cautioned last week. Shockingly, mortars killed at least 19 children in Aleppo yesterday, including six in a UNICEF-supported child friendly space.

This ongoing crisis has left almost 3 million Syrian children out of school and puts their future at risk. A new Save the Children study, Education under Attack, shows this situation has become very dire as schools inside the country “have been indiscriminately bombed, destroyed, commandeered by armed groups, or turned into weapons caches or torture centres”.

A lifetime’s potential under threat

Long gone are the days when an estimated 97% of primary school-aged Syrian children were attending class and Syria’s literacy rates were thought to be at over 90% for both men and women, surpassing the regional average. Today, there are 4.8 million Syrian children of school age. Inside Syria, 2.2 million of them are not in school, while more than half a million refugee children are not in school outside Syria, according to UNICEF.

Exposed to exploitation, trauma and abuse in conflict settings, children are also the most vulnerable to be affected by the dramatic consequences of the crisis, particularly the impact on health and education. Thus, every Syrian child out of school is a lifetime’s potential under threat, undermining his or her future life opportunities. Indeed, ensuring access to learning is an essential platform for protection, social stabilization and economic recovery.

And yet, given the poverty that Syrians face, having lost their livelihoods, and the lack of income-generating opportunities, families are forced to push education down their list of priorities.

Equality, the benchmark in the field of education

Due to the Syrian government’s goal to eliminate illiteracy by 1991, primary and preparatory schools were built in many areas, and mobile schools travelled into remote desert areas. With parents legally compelled to send both sons and daughters to school and no tuition fees charged, education levels had been consistently good ever since. If daughters did not attend school, their parents risked facing punishment. Thus gross primary and secondary school enrolment ratios (females as % of males) were approximately equal, at 99% for primary education, and 100% for secondary.

Years of brutal conflict have reversed more than a decade of progress in children’s education. Schools have been destroyed, damaged, used for military purposes or turned into shelters for displaced people. Where the buildings still stand, education staff has been lost with 50,000 teachers having fled or been killed.

Often, refugee boys are pushed by financial pressure to return to Syria to join armed groups in exchange of sustenance, shelter and a salary. Girls who get married are more likely to stop going to school. Consequently, enrolment rates have decreased substantially, yet on a similar rate for both boys and girls. The net enrolment rate for primary education dropped from 92% in 2004 to 61% by 2013 (61.1% for female and 62.4% for male) and, for secondary education, from around 72% in 2009 to 44% in 2013 (43.8% for female and 44.3% for male).

In a conflict that has been distinguished by a brutal targeting of women, this is particularly concerning. The United Nations has gathered evidence of systematic sexual assault of women and girls by combatants in Syria and describes this as rape as “a weapon of war”. Indeed, the Islamic State (ISIL) has only escalated the brutal treatment and sexual enslavement of women and girls in the zone. Although cases of sexual violence of boys in detention have also been reported, security concerns make parents more reluctant to allow their daughters to travel long distances to attend school.

So it is that, exacerbated by traditional gender roles and inequalities that cause parental prejudice against girls’ education, Syrian girls have ended up a high risk of dropping out of school as one of the devastating consequences of conflict on civilian population.

Education, a catalyst for children’s well-being

Humanitarian operations resulting from positive cooperation between regional governments hosting Syrian refugees are lifesaving initiatives enhancing the living conditions of internally displaced people across the country. Nevertheless, when looking at the longer term, education is the best guarantee for both developing a child’s well-being and the country’s future prospects. Especially for girls, who face increased risks in the context of conflict, is education linked to empowerment.

“During times of conflict and insecurity, maintaining access to education is of vital importance for children’s protection and development,” explains the new Save the Children report. “When schools are safe from attack and other threats, they can provide an important sense of normalcy that is crucial to a child’s development and well-being, and can also help provide important safety information and services.”

Thus, given the mobility of families, active conflict and limited humanitarian access, the international community will need to look at ways to find more suitable and effective solutions to a long term education response to address the needs of out of school children, boys and girls, in Syria. Only if recognized on time will the catalyst and transformative effects of education prevent the costs of conflict perpetuating for decades to come.

Loss of Access to Education Puts Well-being of Syrian Girls at Risk by Marta Guasp Teschendorff is licensed under a Creative Commons Attribution-NonCommercial-ShareAlike 4.0 International License.

Marta Guasp Teschendorff is a research intern at the United Nations University Institute on Globalization, Culture and Mobility (UNU-GCM). Master’s candidate in International Relations at Institut Barcelona d’Estudis Internacionals (IBEI), she has experience working in the fields of social inclusion, cultural diversity and education policy, and a particular interest for inter-ethnic conflict and cooperation and development.