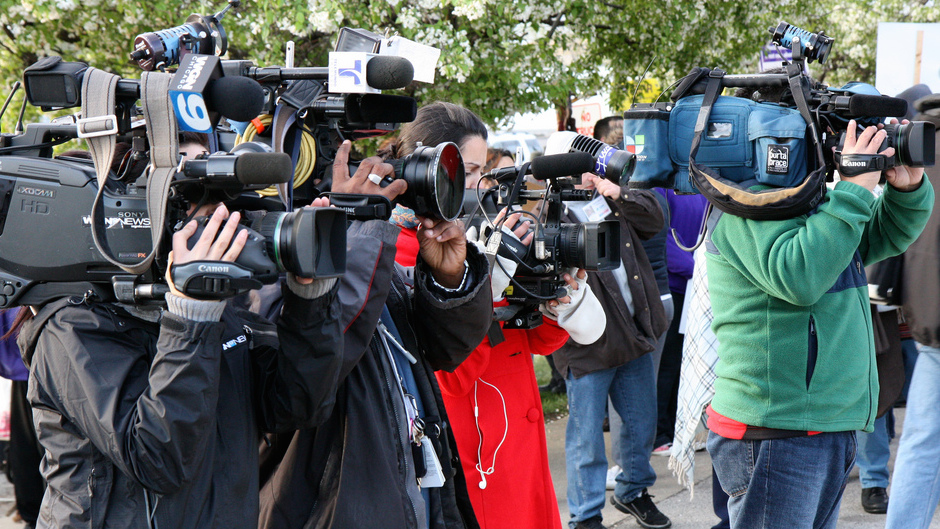 As the dust settles after the recent European Parliament election, the results show historical gains for the far-right populist parties in Britain, France, Greece, Austria and Germany. Analysts linked these transformations partially to the growing anti-immigration sentiment in Europe, as people, particularly in bad economic times, tend to resort to scapegoating and blaming migrants for ‘stealing’ their jobs and housing. It often turns out this way because people are poorly informed about migrants and easily manipulated by the alarmist narratives of far-right politicians. Therefore, instead of acknowledging the increasing diversity of their homecountries and recognizing how it could enrich societies, people see migrants as ‘others’ and as threats to the existing social order.

Clearly, public attitudes are not wholly shaped by media. However, in the age of globalization, media become very powerful tools and some of the main determinants of public opinion. Depending on the type of media and the aims behind them, they can either reinforce the criminalized image of a newcomer and underline anti-immigrant rhetoric or, on the contrary, help to better integrate migrants and serve as a genuine transmitter of their stories, thus counteracting misunderstanding and fear. To ensure that the human rights of migrants are protected and that intercultural understanding (where diversity is seen as a positive phenomenon) is built, the international community needs to address the power of media and the effects they produce in the public conversation on migration.

Building up the scapegoat image

The language used in the mainstream media when covering stories about migrants vividly mirrors the existing narrative of migrant as ‘the other’ and shapes it at the same time. Perhaps the clearest articulation of anti-immigration sentiment can be found in the British press. Examining 43 million words (i.e., the content addressing migration in 20 popular British newspapers) between 2010 and 2012, a 2013 report by the Migration Observatory at the University of Oxford, found that the most common word used in relation to “migrants” was “illegal”. Headlines like “Eight-fold increase in the number of illegal migrants entering Europe” are typical. “Failed” turned out to be the most common descriptor of “asylum seekers”, while in order to describe the security concerns and aspects of legality of migration, words such as “terrorist”, “sham” were most commonly used. This kind of language criminalizes migrants who often cross borders in vulnerable circumstances.

These words often surge without being substantiated by data, while the media turn out to be far from objective when it comes to migration and rather take a stance through the language they choose. The trend is very alarming as the mainstream media is still often a primary source of information for citizens and its message gets transmitted to the consciousness of readers, having an effect on how they relate to the multicultural societies in which they live.

Several studies have found evidence for positive correlation between media coverage and attitudes towards migrants, where extensive news coverage contributes to the success of populist rhetoric and rise of anti-immigrant sentiment. In fact, in the wake of the European elections, the French press was accused of being too soft on the National Front and instead of focusing on and questioning their agenda and party manifesto, paid more attention to the level of public support the party enjoyed, playing a contributing role in the rising tide of populism.

Bridging the gap of alienation

At the same time, some are attempting to reshape the discussion, as different media sources try to break the stereotypical demonization of migrants and capture the contribution they make to the vibrancy of host societies. The free United Kingdom newspaper Migrant Voice is led by migrants and is therefore actively bringing their opinions to the public while introducing readers to the life stories of newcomers, their aspirations and plans for the future. It draws attention to migration policies and the effects they produce, including those on the British economy. The main aims are building a more inclusive public debate and shifting the narrative to help to change the public attitude. An independent website Migrant Solidarity in Calais is run by a group of people in France and documents the daily abuses of refugees by the French police, while also providing them with legal advice and information on their rights. Through online media, they attempt to share accurate information with the public on the poor conditions that refugees face.

Often, all that is needed is to raise awareness about the daily experiences of migrants and photography turns out to be the perfect tool for that. The 2014 World Press Photo Award went to a moonlit image showing migrants trying to get mobile phone signals and call home, as they make their way to Europe for better life. Photo projects across Europe serve as a lens through which the local population can get to know the diversity of migration experiences and confront the stereotypes about migrants. The Migrant Photography exhibition, “Belonging”, in Belfast gives a glimpse into the lives of migrants, combining art with workshop activities, engaging the local population into a much-needed dialogue. Each portrait of a migrant is accompanied by an audio-recording of their personal story and individual experience. Another example is a global photo-project, the “Moving Walls” that showcases images of migrants and refugees depicting a wide range of often under-reported social issues.

Opening up an inclusive public sphere

Returning to the topic of the European elections, why did the far-right parties manage to gain popular support playing the anti-immigrant card? In essence, it is because there exists a widespread sense that it is impossible to change the existing social orders blaming ‘the other’ seems the only option. The answer to this problem requires creating an inclusive public sphere as an encompassing forum where opinions are shared and shaped and where migrants too could have a say. In fact, the internet and social media can perform this function as, despite the recent rise of cyber-racism, they have the potential to serve as a platform for public engagement and constructive dialogue at all levels.

The international community has been taking steps to acknowledge and address the link between public opinion about migrants and media. During the Second UN High-level Dialogue on International Migration and Development in October 2013, migration was recognized as the core of the international development discourse and Making Migration Work: An Eight Point Action Agenda was announced. One of its points highlights the importance of media as the means to combat xenophobia and intolerance against migrants, especially through raising public awareness about the lives of migrants, the challenges they face and the contributions they make both to host societies and countries of origin. Civil society, on its part, proposed a follow-up Five-year Action Plan that includes migration in the post-2015 development agenda and sees it as a tool to reduce poverty and promote development.

Meanwhile, there are initiatives to foster greater dialogue between academic and policy circles through, for example, the United Nations University Migration Network. Such explicit attention to migration as a core feature of the global development discourse certainly has the potential to turn the spotlight on the human face of migration and to change public perceptions of migrants for the better, portraying them as individuals looking for ways to contribute. Moreover, international reflections on media and migration boost efforts to protect the human rights of migrants and to highlight the responsibility media has in shaping public perceptions while ensuring that myths and rumours do not negatively affect the lives of migrants.

Media and Their Role in Shaping Public Attitudes Towards Migrants by Victoria Danilova is licensed under a Creative Commons Attribution-NonCommercial-ShareAlike 4.0 International License.

Victoria Danilova is currently doing an internship at the United Nations University Institute on Globalization, Culture and Mobility in Barcelona (member of the UNU Migration Network). She is also a Master’s student at the Institut Barcelona d’Estudis Internacionals where she is obtaining a degree in international relations. Having working experience in broadcast journalism, Victoria is particularly interested in the migration-media nexus and cultural diversity in the context of globalization.