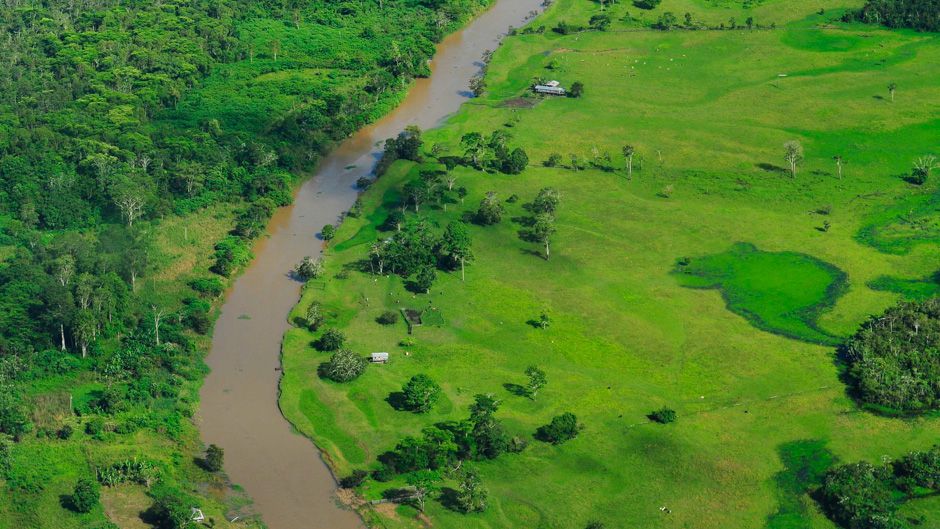 Vast, red, dirt roads pave the way to the new agro-industrial frontier in Matto Grosso, in the centre of Brazil. The landscape is breathtaking. On one side of the road, the pastureland is populated by a few cows which raise their heads to follow the passing cars. On the other side of the road, industrially-planted soya mega-crops stretch to the horizon, forming perfect geometric patterns. Occasionally, a patch of forest breaks the monotony, a reminder this land was once part of the world’s largest rainforest.

Deforestation of its Amazonian rainforest — host to one third of the world’s tropical forest — is largely to blame for Brazil’s status as the biggest emitter of greenhouse gases in Latin America. For many years it had the highest deforestation rate anywhere in the world but international pressure and domestic mobilisation finally forced the Brazilian government to act.

The government of the former president Luis Inacio Lula da Silva began to enforce long-neglected forest laws. This allowed him to withhold money from states which failed to prevent deforestation, and to ban the sale of products grown in illegally deforested areas. The government used satellite imagery to monitor lawbreakers, sent in police to raid illegal loggers, and black-listed municipalities with the worst deforestation record. The strategy paid off: in six years the rate of deforestation had fallen by 70 percent.

“Things have been turn upside down,” said Valmir Schneider, a soya farmer in the town of Querencia, a soya production region in the Amazonian state of Mato Grosso.

“First they asked us to come to these lands and now we are the villains for turning it productive.”

Schneider moved here from Rio Grande do Sul, a southern state with a large German migrant population in the 1980s during a government-sponsored colonisation programme. Deforestation was national policy then in a bid to populate the far-flung Amazonian jungles, which the government then regarded as unproductive. The scattered groups of indigenous people living in the Amazon were seen as savages and not treated like Brazilian citizens.

“The Xingu has changed,” said Ianukula Kaibi-Suiá, who lives in one of the indigenous towns along the Xingu River, the state’s main water source and one of the tributaries of the Amazon River.

“There is little fishing, the water is murky and there are fewer species,” he explained.

Despite the fact that Xingu valley is designated as a national park, a growing number of soya farms and cattle ranches encircle the reserve. Farmers have chopped down river banks and trees, in turn drying up the water sources that run into the Xingu. 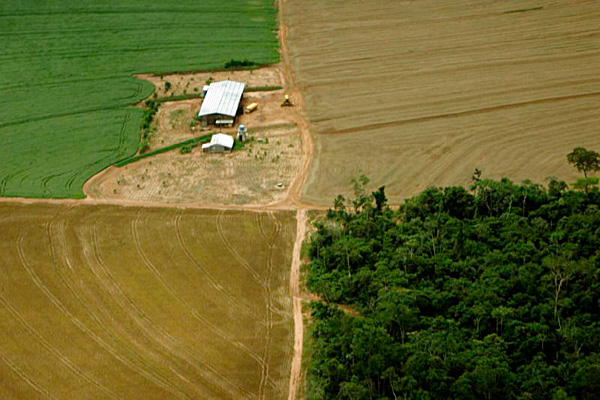 The most dramatic way to see the extent of deforestation in the Amazon rainforest is from the air. Photo: Leonardo F. Freitas.

In 2004, about 6,000 Indians, whose habitat is dependent on water sources in the reserve, issued an S.O.S to activists and local authorities. Several organisations initiated a project to encourage farmers and landowners to reforest and comply with the law.

Schneider is one of the farmers that were convinced to take part. He did so after his municipality was blacklisted by the federal government and local authorities put pressure on those not complying with the law. He acknowledges that currently only 25 percent of its 2,000 hectare property is preserved as forest. The current law stipulates 50 per cent. Like Schneider, nine out of ten farmers are out of step with the law.

Natura, a Brazilian cosmetics firm, is supporting the reforestation of Scheider’s land by buying seeds and funding the replanting in a 30-year agreement.

“The true incentive would be for me to be paid for keeping the forest standing up,” said Schneider. “It’s a long term commitment and a huge responsibility but I don’t get much out of it,” he said. Schneider has heard about carbon markets, but is only vaguely aware of how they work.

In the absence of financial incentives, other factors play a part. Natalia Guerin, a researcher for the Instituto Socio Ambiental (ISA), the NGO which leads the reforestation project, believes that “[t]hey don’t do it necessarily because they love nature or care about environment, but because that they see a benefit in it, avoiding fines and prosecution and protecting the water they desperately need.”

Reforestation has also opened new markets. In fields deforested for pasture, the trees grow back if there are no cattle. Time and barbed-wire are the ultimate technologies. But in soil that has been industrially planted, native seeds have been removed or killed, so the forest needs to be replanted.

“Look, this is the pit of jatobá and this is of guanandi,” said Santino Sena, a man with tanned skin and gnarled hands, collecting native seeds which had floated to the surface in a swamp in the jungle of Canarana, another municipality of Mato Grosso.

Like him, 300 other seed collectors supply a growing market: between 2007 and 2010 the sale of forest seeds for reforestation quadrupled. Farmers buy the seeds and the municipality supports a nursery and brokers the sales.

“Before I didn’t think twice and now it hurts if I cut a tree,” said Sena, who used to make a living by chopping down trees. He owns a house, a small Fiat and a motorbike that he paid in part with seeds. In a year can earn up to 10,000 Reales (US$ 6,000). The seed market is now moving onto the Internet.

The demand for native seeds has grown not only from government pressure but also thanks to technology. The Instituto Socio Ambiental, where Guerin works, has put in place a technique to use the soya planting machinery to plant forest seeds, speeding-up the process and reducing labour.

But reforestation is going at snail’s pace compared to the rate of multi-million dollar business expansion. Brazil is the largest exporter of beef in the world and second-largest exporter of soybeans after the United States. Agriculture accounts for 22 per cent of the country’s GDP. Controlling and securing food production today is as strategic as having oil or a nuclear warhead. Experts estimate that to restore life to the Xingu valley, 300,000 hectares need to be reforested, of which so far only about 3,000 have been recovered.

Environmentalists fear that even the new-found support from farmers for reforestation might be damaged by a proposed Forest Code to be voted on in Brazil´s Congress. The code, which has yet to be tabled, is being pushed forward by ‘ruralistas’, the powerful bloc of politicians who defend agro-industry interests. They call it a more realistic law in line with developing the Brazilian economy.

Environmentalists such as former presidential candidate Marina Silva, claim, however, it will simply foster deforestation by reducing conservation areas and granting amnesty to those who chopped trees in the past. “Brazil is goging to through a crucial moment,” she said.

“Since 1965 we have a law to protect forests in Brazil but the new forest code reverses the logic: it is a law to facilitate farming.”

This feature, which originally appeared on Panos London, was produced by Lorenzo Morales as part of a fellowship with the Climate Change Media Partnership, an initiative of Internews, IIED and Panos.

Lorenzo Morales is a freelance journalist, a journalism teacher, and a Pulitzer Center on Crisis Reporting grantee. Since 2009, he has covered environment-related news, such as water access and his country’s recent mining boom.