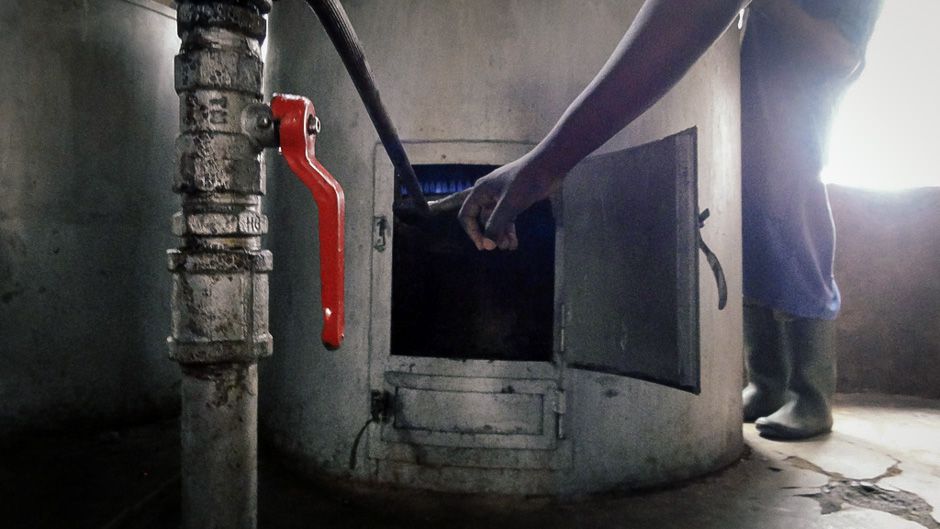 Biogas used in a stove in a school in Rwanda. Photo: P. Feiereisen/Sustainable Sanitation.

One, two or more of the 102 newly launched out-of-the box ideas to improve global health could be world-changing breakthroughs.

It might be someone’s idea to create a test strip you touch with your tongue to see if you have a deadly disease. Or a mobile phone game to prevent HIV. Or the idea that untreated human waste from slums could be turned into marketable products.

Breakthroughs can’t happen without a genius idea and the opportunity to see if it works, said Dr. Peter Singer, CEO of Grand Challenges Canada.

“The health challenge is global but opportunities to pursue unconventional ideas is not,” Singer told IPS.

“I was in Tanzania recently and young researchers there had great, off-the-wall ideas but no one thought they’d ever have a chance to pursue them,” he said.

Global Challenges Canada not only provides funding, it often acts as a mentor and helps set up partnerships with researchers in Canada. “Sometimes it’s just a matter of building self-confidence in their idea,” Singer said.

Although the 102 ideas are selected through a peer-review process, at this early point they aren’t much more than inspired ideas. No public or private organisations are interested in investing at such an early unproven stage.

Singer calls this the “pioneering gap” and hopes to create an “innovation pipeline” that one day will improve the health of people in their country.

“Maybe a few of these will become household health products one day,” he said.

If any of these raw ideas prove effective, the innovators will be eligible for an additional Grand Challenges Canada scale-up funding of up to one million dollars. The government of Canada funds the programme and is committing roughly 10.9 million dollars to support a portfolio of projects that could transform the way disease is treated in the developing world through the Grand Challenges Canada Stars in Global Health programme.

“We are pleased to work with our like-minded partners around the world to support global innovation and entrepreneurship that help produce better, brighter futures for people around the world,” said Canada’s Foreign Affairs Minister John Baird.

In Uganda, almost all human waste is discharged into streams, rivers and lakes, causing huge health problems. What if human and other waste could be turned into an energy and revenue-producing bio-gas?

Corinne Schuster-Wallace of United Nations University’s Canadian-based Institute for Water, Environment and Health is working with two Canadian companies to use large underground tanks to mulch human waste along with fish market refuse and other organic trash. Methane from the tanks will be tapped for a new economical source of fuel.

A sanitation system for 400,000 people in Kampala’s urban slums could operate on the profits from selling the biogas, a recent study showed.

Here is a video of Schuster speaking about the project.

Another Ugandan project involves the development of a paper-strip test for the rare but deadly Ebola and Marburg viruses. The highly infectious nature of both diseases makes them major global threats. They are very hard to detect in the early stages, said project leader Dr. Misaki Wayengera of the Makerere University College of Health Sciences. (Video clip of Dr. Wayengera talking about his project.)

A similar test strip is being developed to test for dengue, often called “breakbone fever”, which afflicts up to 100 million people in tropical climates, said Ken Simiyu, a programme officer at Grand Challenges Canada. Early detection and treatment makes a huge difference in the outcome.

The idea is that a 10-cent strip of plastic-coated gold nanoparticles in combination with a 10-dollar hand-held device will be able to detect the disease, Simiyu told IPS.

Brazilian-born Dr. Alexandre Brolo of the University of Victoria, Canada has developed the test strip and will be testing it in Brazil. (Dr. Brolo talks about his innovation.)

Led by Dr. Njambi Njuguna of Kenyatta National Hospital, Kenya, the programme will send HIV-related mobile phone text messages to young females, many of whom do not perceive themselves to be at risk and thus don’t test. In Kenya, 84 percent of HIV-infected people are unaware of their status, with 33 percent untested because they don’t perceive a risk to themselves. (Dr. Njuguna talks about her bold idea.)

Getting this kind of real-time data is extremely important in both prevention and in designing effective public health programmes, said Singer.

“Beverage companies know exactly how many bottles they sold today. But in most of the world, we don’t know how many children died today,” he said. “If we don’t measure we can’t act.”