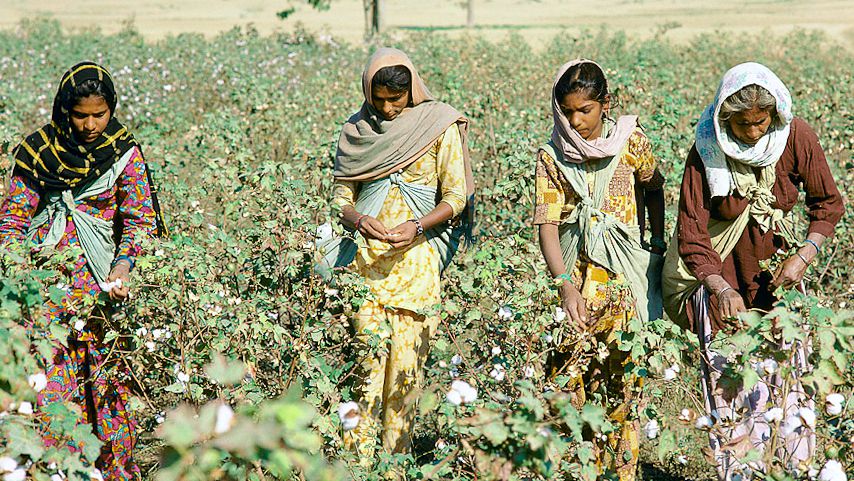 From the toes of our socks to the hem of our necklines, Americans alone consume 25 percent of the world’s cotton, mostly in the form of clothing and home furnishings. People are often surprised to learn that the world’s largest purveyors of cotton seeds (about 80-90 percent of market share in some cotton-producing countries),  is a company generally assumed to be focused on food stock. When pulling on their pants in the morning, most people don’t think about Monsanto.

When it was first introduced in 1996, Monsanto’s genetically engineered (GE) cotton seemed like a dream come true. The fact that the plant protected itself from pesky bollworms with a genetically induced insecticide meant that farmers would save money on pest control, and the environment could be spared tonnes of harsh chemical sprays. Farmers who previously relied on dangerous pesticides and plowing of the land to bury weeds were able to switch to RoundUp assisted, no-till styles of agriculture that curbed soil erosion and reduced the runoff of fertilizers from the land.

However, after the first harvest of Monsanto’s GE cotton, outraged American farmers began filing lawsuits against Monsanto, claiming that the company misrepresented the effectiveness of their product. Farmers claimed the GE cotton failed to repel bollworms on over a million and a half acres.  In addition, complaints poured in that bolls (the soft fuzzy part of the plant that contains the actual cotton fibers — without which there is no harvest), were falling off the plants in the states of Louisiana, Tennessee, Arkansas and Mississippi.

Monsanto was not deterred. They continued to develop their GE plants, gradually improving their performance. In the meantime however, the troublesome pests evolved as well. By 2009, on farms across the southern half of the United States, Monsanto’s Roundup was less capable than ever at fending off weeds, such as the remarkably prolific pigweed (Palmer amaranth). Seven feet tall when fully grown, pigweed quickly choked out anything else trying to grow in its shadow. Consequently, more and more sprays were needed to contain pests of both the animal and plant varieties. Farmers crouched in their fields to pull weeds by hand for the first time in decades, and saw their expenses increase further when they were forced to hire extra hands to get the work done. Then there was the issue of insecticides. 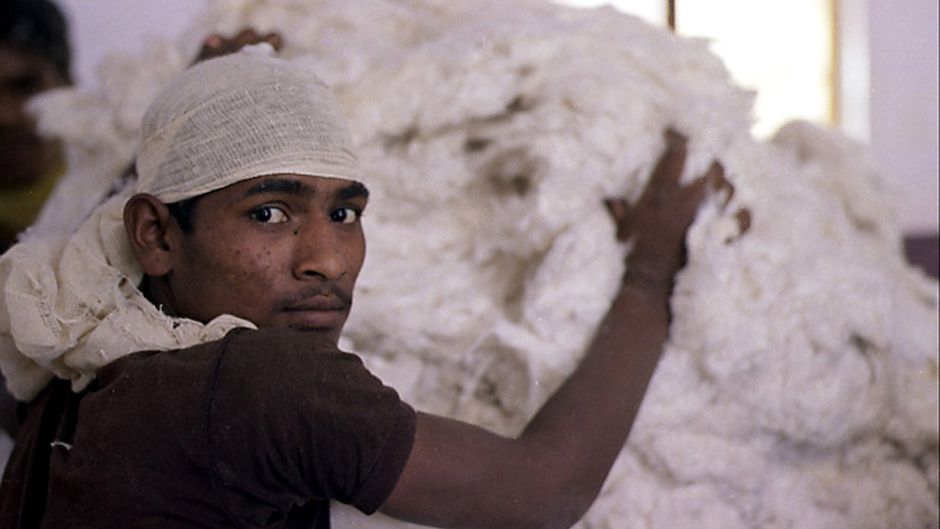 [quote quote=”World wide, cotton is doused with more chemicals than any other crop. Though it accounts for just 2.5 percent of the world’s farm land, cotton cultivation is responsible for 16 percent of global insecticide use.” type=”image” image=”3802″ ]

World wide, cotton is doused with more chemicals than any other crop. Though it accounts for just 2.5 percent of the world’s farm land, cotton cultivation is responsible for 16 percent of global insecticide use, according to a study by the Environmental Justice Foundation in collaboration with Pesticide Action Network UK. These insecticides, which are by their very design hazardous to living things, now turn up in rivers, lakes, drinking water, even in freshly fallen rain all over the globe.

Of all the world’s cotton farmers, 99 percent are small land owners living in rural communities where protective gear is unavailable and the literacy needed to read safety warnings is rare. As a result, there are at least 20,000 deaths and 1 million hospitalizations directly related to pesticide use on cotton crops every year. Regrettably, a large percentage of those affected are children.

As bad as all this news about insecticide use and surprisingly vigorous pests seemed, it was shortly after the introduction of GE cotton in India that Monsanto found out what bad press really looked like.

India is special in this story for a few reasons. First, the land in northern India is not ideal for growing cotton. Though the country devotes more acreage to the plant than any other nation, it comes in third for cotton production after China and the United States. Yields have always been low due to pests and drought. India also has more individual cotton farmers than China or the United States. Most own small plots that they work very hard to earn less than the country’s minimum wage.

Monsanto entered India in 2002 with some very compelling advertising. They claimed their engineered seeds would produce yields up to five times that of conventional cotton – 20 quintals per acre (equivalent to approximately 4.5 bales) compared to the 4 quintals (less than 1 bale) farmers were struggling to pull from their fields at the time. At the time, Monsanto admitted that their seeds costed more but insisted that investment would pay dividends. 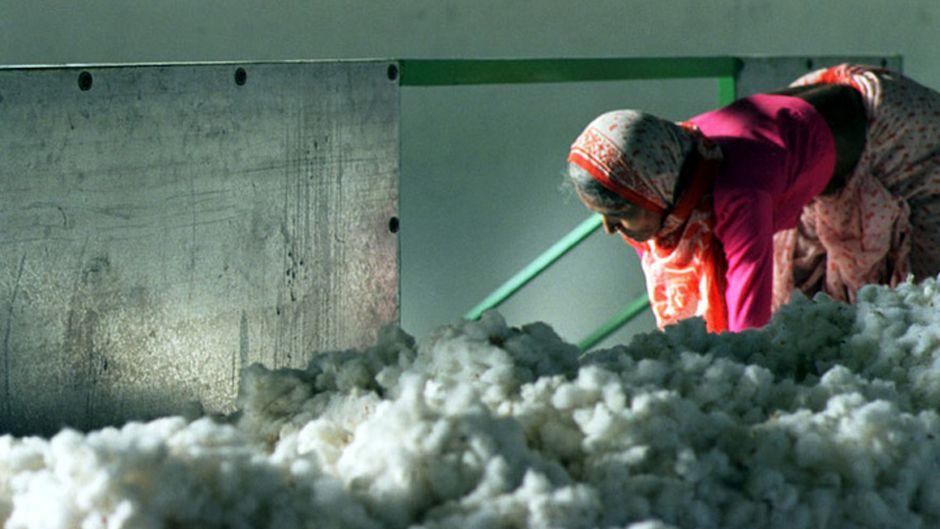 [quote quote=”On average since 2002, of the farmers in India, many of whom fell into the Monsanto trap, one is committing suicide every 30 minutes. Many end their lives by drinking RoundUp.” type=”image” image=”3803″ ]

Unfortunately the average yield of Monsanto’s GE cotton turned out to be nowhere near the advertised 20 quintals per acre. In reality the average output of the crop turned out to be 1.2 quintals per acre. Nowhere in India did it exceed 4 quintals per acre at the end of the harvest. To add insult to injury, farmers soon found out that the fibers produced by the Monsanto GE cotton plants were of lower quality. Instead of getting the usual $86 per quintal, they were only able to sell their crops for around $36 per quintal.

It was a situation faced by thousands of cotton farmers in India. Most were quickly reduced to taking on an ever increasing amount of debt, planting different varieties of cotton year after year, with distant hopes that someday they might see a lucrative enough harvest to break free of this vicious cycle. Sadly, many farmers have chosen a different way out. On average since 2002, of the farmers in India, many of whom fell into the Monsanto trap, one is committing suicide every 30 minutes. Many end their lives by drinking RoundUp.

As heartbreaking as the situation in India is, it is reasonable to assume that Monsanto didn’t bring its business to the country with the intention of killing farmers. Without farmers they have no customers. It would simply be bad business to intentionally instigate the demise of their patrons. They sold a product they thought would do well, and it didn’t work out.

As consumers, though, we are under no obligation to accept this state of affairs. The organic cotton industry is booming at a growth rate of 60 percent a year. Though often featured in expensive boutiques, organic cotton is no longer a luxury for the rich. In fact, in 2006 Wal-Mart became the world’s biggest purchaser of organic cotton. Other companies like Patagonia and Timberland have long worked to provide environmentally responsible products. One need only search popular shopping sites like Amazon for “organic cotton” to find literally thousands of options for any budget.

So next time you’re shopping for new clothes, think about it. And if you can swing it – go organic! The planet, your fellow humans today and in generations to come will be better off for it.

April Dávila is a freelance writer living and working in Los Angeles. You can find out more about her work here at http://www.AprilDavila.com.